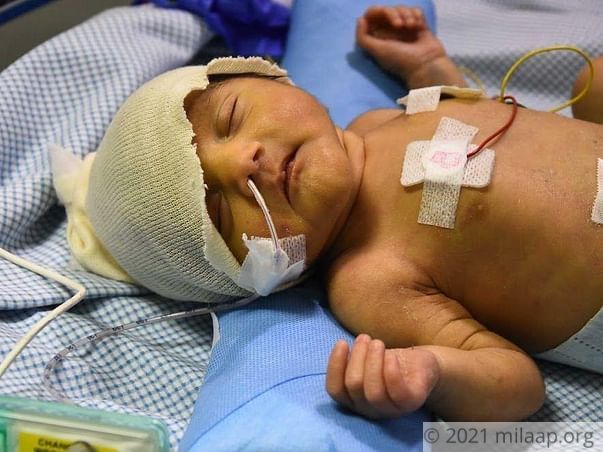 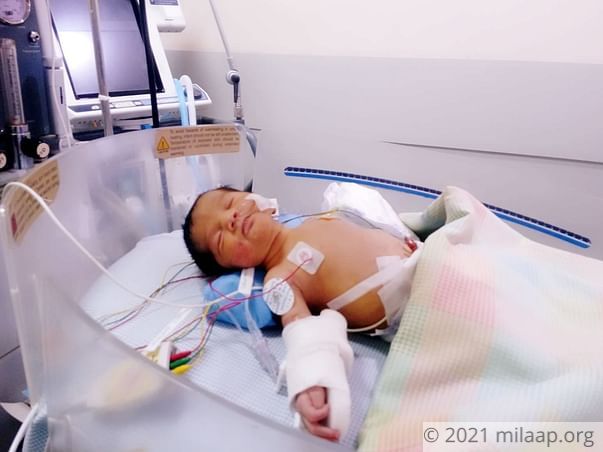 Share
Saha and Mohamed had been through a most painful journey in the past two years. They were hopeful and thrilled about the arrival of a second baby. But it was a big blow to them to learn that their baby had critical heart disease. Saha's baby girl needs an urgent heart surgery to survive.
Saha had a c-section in the eighth month because her pulse rate was very high
Saha's pregnancy was smooth until the eighth month. She and her husband went for a general check-up, and unexpectedly learnt that her pulse and heartbeat were very high. Doctors insisted that an immediate c- section be done to save her life. Saha was very critical and Mohamed was terrified and was totally unprepared for this emergency.Baby Girl was born with a heart disease and has breathing trouble

Mohamed did not know that the worst was yet to come. Saha was taken to operation theatre and a girl baby was born to them. Doctors said that their baby had a critical heart problem and needed an urgent surgery to survive. Mohamed was completely devastated but he had absolutely no time to sink into grief. He rushed with his baby girl in an ambulance to Apollo Hospital, Chennai, from Madurai, leaving his wife alone at the hospital.
"No one should experience such pain in life. I shuddered at the thought of my wife opening her eyes and not finding the baby next to her. I can't imagine what pain she must have gone through. She has not seen the baby yet. We wished for a girl baby, now we have her in our hands but she might go away from us any moment" - Mohamed breaks into tears
Saha's girl baby was born weighing 2.25 kg, within a day her weight dropped by half a kg. Doctors say that she needs an urgent surgery before her weight drops down further. She also has breathing trouble. Every passing moment without a surgery is a risk taken on her life.Saha's first baby was born with a deformity in his legs

Saha and Mohamed have a baby boy who is just 1 and a half year old. He was born with a deformity in his right leg. He had an eye operation when he was just 1 year old. Saha and Mohamed have been fighting all the odds to help him have a normal life. When they learnt that their second baby is fighting for life, they are just heartbroken, no words can comfort them.

"My wife is still in bed unable to move, she is begging to show her baby to her. How can I show in this situation? I have told her that baby needs a small surgery but I'm shivering to think about the intensity of the condition. I can't imagine if I had to tell my wife that I lost the baby because of lack of money"

Mohamed had to take his first child every one month for a checkup and he had dengue fever followed by the eye operation. Mohamed had been spending most of the time literally in hospital. He has absolutely no source of income now. He has borrowed money heavily for the treatment expense fo his first child. He had sold all that he had, he sold his mother's jewels to manage the expense in Chennai.

The condition of Saha's baby girl became worse. There is only one possibility of recovery i.e to have a surgery immediately but Mohamed has no single penny left to pay for the surgery. He needs Rs 4 lakhs for the surgery. Only your contributions can save their 2-day-old girl baby.