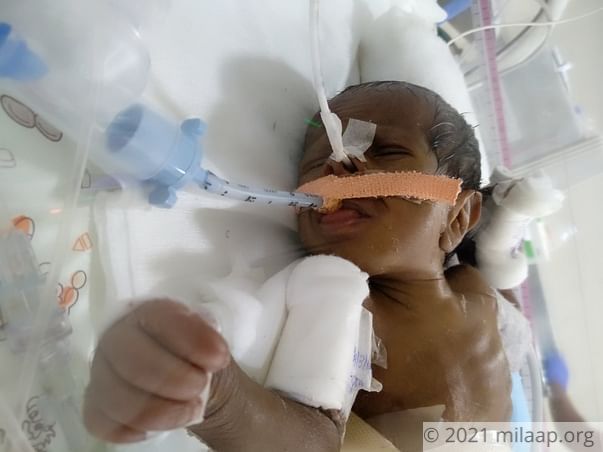 “Having a premature baby is bad, but unfortunately we also have to see him suffer through multiple surgeries to stay alive.”

Revathi and Chiranjeevi were waiting to start their journey of parenthood when their dreams crumbled. Revathi went into premature labour and delivered the baby in the eighth month of pregnancy. Her baby was extremely underweight and had to be put on the ventilator in the NICU right away. But their ordeal was far from over.

Their baby had a defect in his intestine

Revathi's baby was born with a severe congenital defect - Intestinal Atresia - or blocked intestines. The doctors told the distraught parents that, their baby needed an urgent surgery. The blockage in his intestine had to be cleared for him to stay alive. Their week-old baby needed a surgery to live. Unfortunately, the surgery failed and the baby's health continued to deteriorate.

He couldn’t feed because of the blockage in his intestine and was dependant on intravenous nutrition. Revathi and Chiranjeevi started losing hope that their firstborn would survive. But to their surprise - they saw that their baby was fighting with all his might to live. They couldn't let him down.

The helpless parents then brought him to Kanchi Kamakoti Child’s Trust Hospital in Chennai, where he is being treated currently. Upon seeing his condition, the doctors there told the parents that he would need two more surgeries at the earliest, to recover.

Within a month, their baby underwent a surgery in which the blocked part of his intestine was removed. This was done so that he could at least start feeding. Luckily, the surgery worked and Revathi’s baby is able to feed now. But he still suffers from pressing issues that are not letting his parents get him out of the hospital.

Chiranjeevi has lost his job and can't afford the costly treatment

Their little boy has difficulty breathing and still needs the ventilator to aid him. Moreover, due to the nature of his sickness and the recent surgeries, he is also at risk for infections. He needs prolonged stay in the NICU for 4-6 weeks. Although their baby boy is showing signs of improvement, the cost of the treatment is too steep for Chiranjeevi to afford, and this is the biggest hindrance they have.

Chiranjeevi used to work as a shop accountant in Bengaluru, for a small pay. Since his wife delivered the baby, he hasn’t been to work. He had to take care of his recovering wife and make sure to be there for his son’s treatment. He lost his job because of his poor attendance. Despite his bleak circumstances, his employer was not ready to grant leave, so Chiranjeevi had no choice but to accept it. He is now trying to find a new job.


“At least I had a job before, now I don’t have an income anymore and I don’t know how pay for the expenses of the treatment. Watching my baby suffer because of my poverty is the most helpless thing.”

While he was already struggling to make ends meet with his meagre income, along with managing his son’s treatment, now he has no income at all. So far he has spent nearly Rs 8 lakhs towards treatment, including all his savings and loans from friends and relatives. Now, he doesn’t have anyone he can borrow any more money from.

To save their baby boy, Revathi and Chiranjeevi need your support. Only your contribution can give him a chance at life and bring back joy into their lives.

Please help Revathi and Chiranjeevi save their baby.