My Baby's Liver Is Completely Damaged And He Has Very Less Time Left | Milaap
This campaign has stopped and can no longer accept donations. 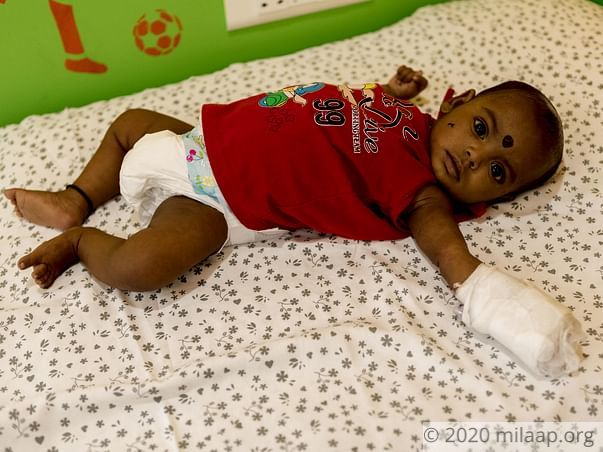 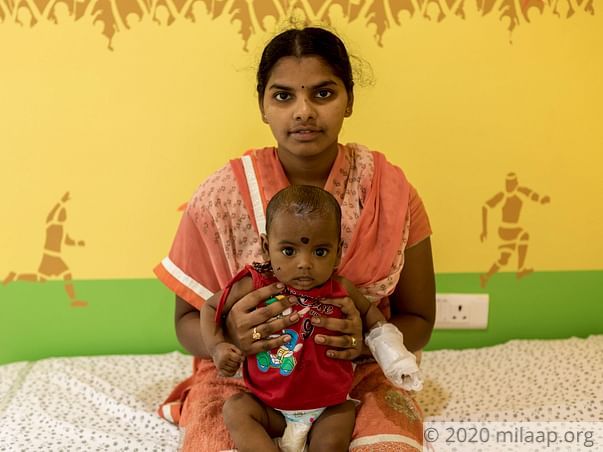 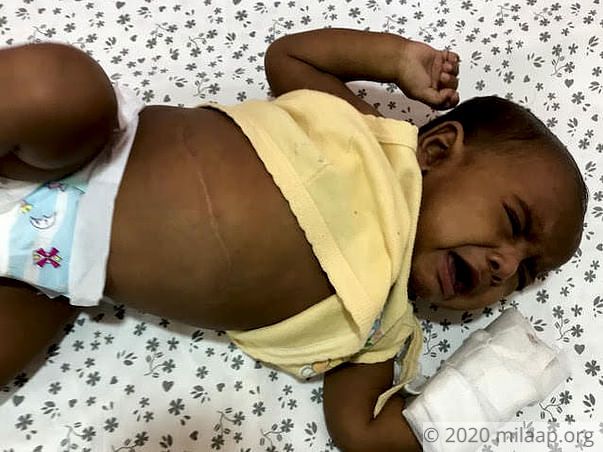 “A few weeks into this world, and my baby was already fighting a fatal disease. We had so many hopes and dreams, but now he might not live long enough to see a future. All I pray for is his recovery. His life has only just begun, how can it be over already?”

Mounika’s baby boy was only 1-month-old when he fell very sick. Mounika and Srinivasulu were worried, but they never imagined what fate had in store for their little baby. He was diagnosed with a severe liver disease and was immediately taken for surgery. Mounika’s baby had barely seen the world, and he was already fighting death. What made it worse was that the surgery did not improve his condition. Only an urgent liver transplant can save this baby boy now and give him a chance of a future.

Mounika’s baby is now 4-months-old. He was born with jaundice, his eyes and skin completely yellow. However, Mounika thought it was nothing to worry about since they were told he’ll get better in a couple weeks. Instead, his condition only worsened. Along with jaundice that refused to subside, his stomach started swelling. It was then that Mounika knew that her baby’s life was in danger.


“Even after a month, the yellowness in his eyes and skin didn’t go away. His stomach also started swelling up. I knew that wasn’t normal. I will never forget the day we found out what was wrong with him. He had cried for hours continuously, so we rushed him to the hospital. He can’t even tell us he’s in pain, but his crying wouldn’t stop. The doctors told us his liver was completely damaged.”

Mounika’s baby was rushed for surgery. Unfortunately, even that didn’t improve his condition.

Mounika and Srinivasulu had many plans for their child’s happy future. They wanted to give him the best life they possibly could, but it all came crashing down because of his diagnosis. Their baby spends most of his days crying. Mounika is worried that he won’t make it without a liver transplant, and they can’t do anything to stop his disease from killing him. It's her greatest fear as a mother.

“All I see when I look at him are his big eyes, looking to me for some comfort. I feel so helpless though. I wish I could take all his pain away and suffer in his place."

Mounika’s baby boy can’t go on any longer without an urgent liver transplant. Mounika and Srinivasulu have put everything they had towards his treatment, but now even that’s not enough. They need 16 lakhs for his treatment, and they can’t afford it on their meagre income. Mounika and Srinivasulu are small-time farmers and with months of bad crops, they haven’t been able to make much to even keep the family afloat. The only thing standing in the way of their baby’s recovery is their dire lack of funds.


“We’re his parents, we’re supposed to be protecting him from all the pain and suffering. Sometimes I feel like we’re failing. He hasn’t even said his first words or learnt to crawl yet, but his body is fighting such a big battle. It’s a matter of life or death for my little boy, and every day that he goes with a liver transplant, he’s inching closer to death.”

Mounika and Srinivasulu’s financial crisis shouldn’t be the reason for their little baby to succumb to his unfair fate. Their little one has been suffering for 4 long months in pain. They somehow managed to spend 4 lakhs on his treatment so far, but the amount needed for his transplant is out of their reach. Mounika and Srinivasulu have fought tooth and nail to try and save their baby, but now they need help to give him the treatment he needs.

Your contribution can save Mounika’s baby’s life.
Estimation Letter 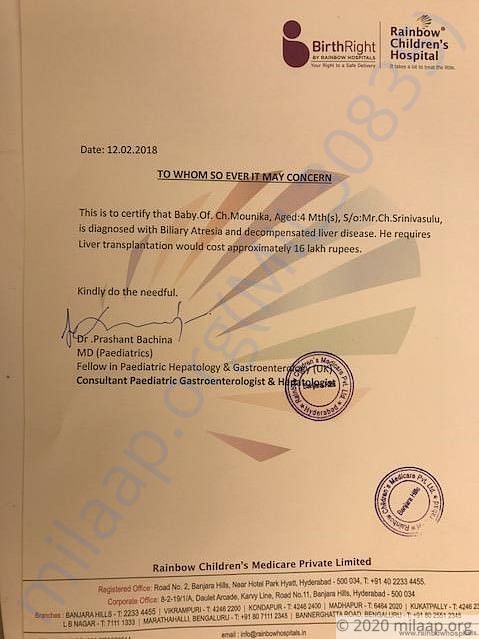 Unfortunately, with inexplicable grief, I'm having to inform you all that Mounika's baby passed away a month ago. It is really disheartening. The team at the hospital and the team at Milaap tried reaching the parents but could not get through. The parents are devastated and were not in a state to be able to talk to us.

It was heart-wrenching to even hear them talk to us. We will forever be thankful to all of you for what you've done for us. Funds raised will be utilized for medical expenses so far.

Report fundraiser
See how thousands are crowdfunding for their causes on Milaap
Rs.965,946 raised 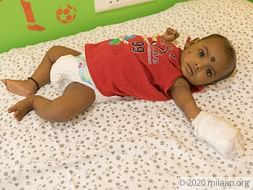