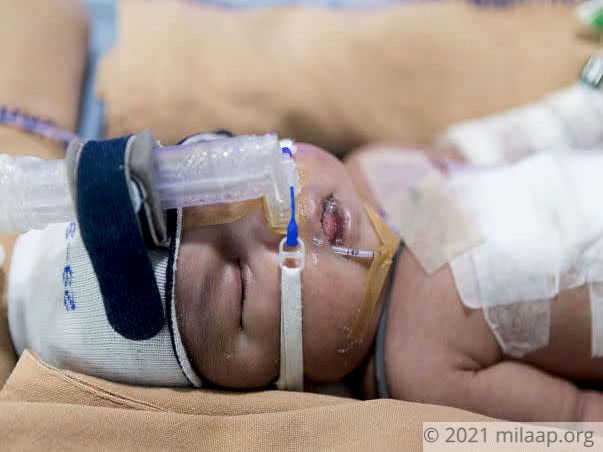 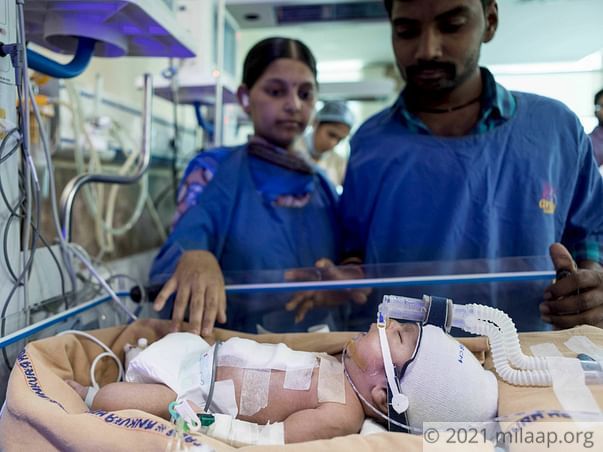 “We were counting the days for the baby to come, but the minute she was born, the doctor’s face looked grim. We knew it couldn’t be good news.”

Manisha and Venkat were a happily married and waiting to start the journey of parenthood. But unfortunately, things didn’t go as planned and their little girl was born with a life-threatening problem. Their baby was born with a hernia, where some of her internal organs were outside her body. Now she is battling for her life in the NICU of Ankura Hospital.

The first time they held her, they were devastated at her state

Nothing had prepared the first time parents for this shock. The first time they held her, they were devastated by looking at her condition. The doctors immediately put her in the NICU, for she didn’t stand a chance at survival otherwise. Manisha and Venkat were told that she would have to be urgently operated upon, in order to save her life. Shortly after that, their baby daughter underwent a surgery that restored her internal organs to inside her body.
Within just 6 days, their little girl has seen more pain than most adults. Her abdomen was operated upon, she struggles to breathe on her own and sometimes can’t even breastfeed. Their baby’s critical condition has sent the first time parents into such a state of shock that they can barely believe any of this to be real. All that is happening to them seems straight out of a nightmare. Manisha hasn’t even recovered from her delivery yet but is having to stay in the hospital, next to her baby and watch her suffer.

Their daughter has tubes all over her tiny body, that are helping her breathe and live. Sometimes when she is not in a condition to feed on her own, nasal feeding and intravenous nutrition are being administered to keep her strength up.


“The doctors don’t even tell me how exactly she is. They think since I’m the mother, I won’t be able to handle it. It is the hardest thing to do, watch your child suffer, through a window, and not be able to pick her up and shush her. No mother should have to go through this.”

Manisha and Venkat are trying their best to not lose their calm. All the waiting leading to this, is the hardest situation they have faced in their lives. Manisha constantly keeps breaking down into tears and Venkat is being her pillar of support even though the fear of losing their first born is killing him from within. He wants to be strong for his wife who is in a fragile mental state now,  and their ailing daughter.

The financial crunch is slowly breaking their morale

After the surgery, the doctors told them that their baby will recover, but she will need a prolonged stay in the NICU, at least 20 more days. Owing to herniation, their little girl is very prone to infections and the slightest contact with germs may prove fatal for her. Manisha and Venkat are willing to do everything it takes to save their baby, but the treatment is too expensive and they don’t have the means to afford it.

Venkat works as a cab driver and his income is barely enough to provide for the basic needs of his family. He had little savings, which were spent towards his daughter’s treatment. They have spent more than Rs. 1 lakh over the past one week and have completely run out of funds now.

Without the needed treatment, Manisha and Venkat’s baby can’t make it alive, and she doesn’t deserve to lose her life over lack of funds. They need your help to save her.

Your contribution can give them their daughter back. 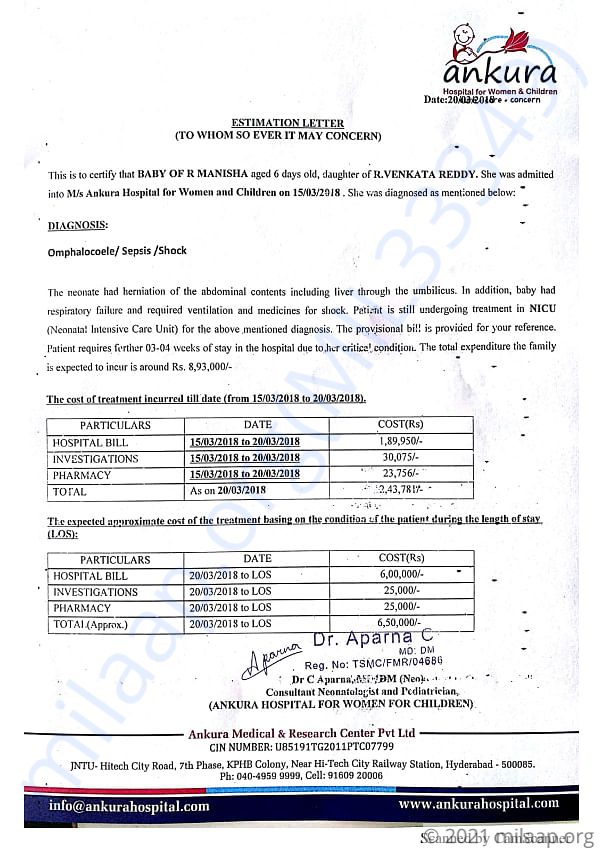 We are extremely grateful for the love and support shown towards Our baby.

She is back at home and doing well. She is still on medication to help her put on weight. She has no other issues with her health now. We have named her 'Moksha'.

Thank you once again for supporting us through the difficult times.

Baby recovered very well after the surgery and was started on mother feeds.

Baby tolerated very well and considerable weight was gain was noted and is discharged now and doing well at home. The parents are very happy to see the baby survive which they thought was mere impossible as the intestines were out when the baby was born.

They expressed their heartfelt thanks to all donors.
Donate
OR

Scan & donate with any app
check_circle_outline Download payment receipt
Report fundraiser
Know someone in need of funds for a medical emergency? Refer to us
Rs.124,101 raised

May God bless the kid and it's family.

Get well soon baby..God is with you!

May God bless the kid and it's family.

Get well soon baby..God is with you! 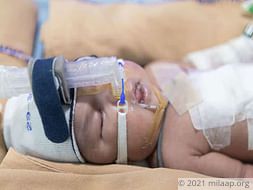