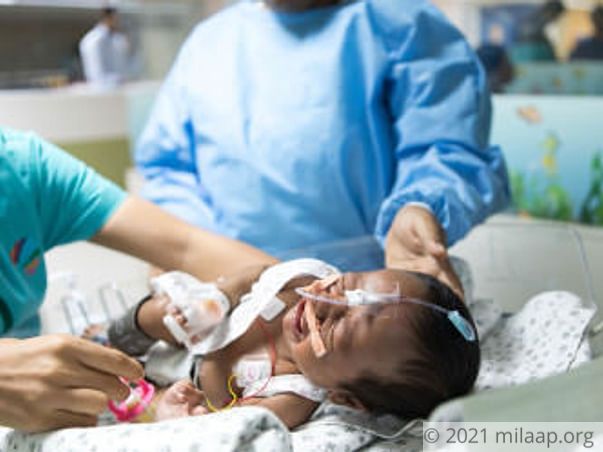 “It was a terrible night. Our 2-weeks-old baby was having seizures and we were running from hospital to hospital. We had no money and all the doctors told us the same thing – there was no hope.” – Esha.

Esha and Ravi are trying to save their 1-month-old baby fighting a severe infection. He needs strong antibiotics and breathing support. His parents have finally found doctors willing to take on the case and help them. All they need is a little support to save their baby.

Only two weeks after his birth the baby became very sick

Esha and Ravi's baby was born on April 24 and was at home for just two weeks. He developed a severe infection which soon worsened and he developed seizures. By the time his parents got him to a hospital that finally took him in – the baby had infections in his lungs and urinary tract.


“It is horrible to see your small baby who can't even hold his head have seizures. His eyes are dull and he sleeps the whole day. The doctors have told us that he will get better. They even tell us that the infection has not reached the brain – that makes us hopeful that we can save him.”

From when he was a child, Ravi wanted to have a career in sports and fitness. To fulfill his dream, he just joined a PhD in Physical Education so he can one day teach. Fully supportive of his goals, Esha worked as a Computer Science teacher in a private school. It wasn't enough but the family hoped life would get better.


“I used to take extra tuition to make ends meet. Now – I simply don't know where to go. We sold my jewellery and took loans and paid bills of Rs 2 lakhs. I want to save my child, but I just don't have a way to keep him in the hospital. He needs just a few more days at the hospital.”

Esha and Ravi have left their 1-year-old daughter with Esha's mother. Esha is torn at the separation, but she is hoping to save her newborn and go home. Ravi has asked everyone he knows for help – even dropping his course to take up a job. But it still does not give them enough to pay all their bills.

The doctors say the baby has a very good chance of getting better once he finishes his course of antibiotics. Because of lack of funds, every day Esha wonders if treatment will stop now because of unpaid bills. Online fundraising is her only hope.