This Newborn Cannot Survive Without 6 Weeks Of Life Support | Milaap
This campaign has stopped and can no longer accept donations.

This Newborn Cannot Survive Without 6 Weeks Of Life Support 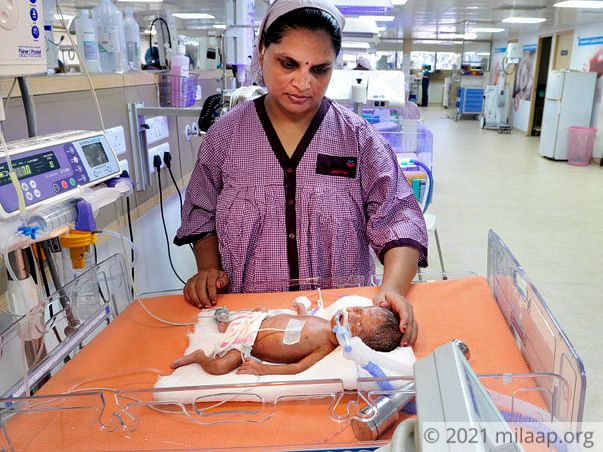 "As I stepped inside the NICU, all I could hear were the low beeps of the monitors and the quiet shuffling of the nurses. I looked around to see where my baby was, but I didn't know what he looked like. All the babies there had tubes running through their nose and mouth, all of them, fighting for their lives. When I saw my baby for the first time, I realized what true helplessness meant." - Dorothy
Born 2 months early, Dorothy and Manuel’s baby boy was barely clinging to life during birth. Now, after developing severe breathing issues and other complications, the 1-month-old baby desperately needs to remain in the NICU and undergo treatment for over 6 weeks to come out alive. Dorothy and Manuel are giving their best but their financial condition is making it very hard to provide for the treatments their baby boy needs.


Dorothy and Manuel in the NICU beside their first child

“He wouldn’t cry after birth. They needed to apply some pressure on his abdomen to make him cry. But, he couldn’t breathe at all. They took him to the NICU immediately. Dorothy didn’t even have the chance to look at the baby, his condition was so severe.” – Manuel

Apart from the breathing issues, the newborn also lost over 20% of his bodyweight right after birth. This is extremely dangerous and he couldn’t stay alive without life-support.

“After losing weight, he was just 800 grams. You can imagine how light that is. He was so weak and he needed to be in the NICU. But, the hospital we were in didn’t have the equipment needed to save my son. Dorothy cried so much because we were told to take our baby elsewhere and he had to travel so much in such a critical state.” – Manuel

Dorothy’s baby made it alive to the NICU at a different hospital and is currently on life-support and feeding tubes to help him with breathing and gaining weight respectively.

During his recovery in the NICU, in between, the 1-month-old’s heart was causing him pain too. Now, the baby received the treatment for his heart, which is beating normally for the time being.

“One of his major arteries wasn’t functioning normally. This was so scary. He’s already on life-support and now this. I couldn’t tell Dorothy any of this because she would lose control and cry endlessly. Any mother would.” – Manuel

“We’ve been married for over 4 years now. We’ve tried so hard for a baby and had so many issues! Finally, one day, Dorothy was pregnant. Later, we found out that the pregnancy had occurred in the fallopian tube. Her life was in danger and her fallopian tube was surgically removed. We were overjoyed when we first knew that we were going to have a baby but this broke our hearts. Then a few years later, through an IUI treatment, she got pregnant again and it seemed like we’re finally going to have our first baby. We’ve been through a lot of pain and hard times to make this happen and now, with my son’s condition, it seems like he difficulties never leave us.” – Manuel

1-month-old baby of Dorothy needs to be in the NICU for, at least, 6 more weeks if he were to make it out alive. Manuel works in a construction company and earns a small sum of Rs. 250/day.

The baby is on crucial life-support and he has high chances of recovering and emerging out as a healthy baby. His weight has increased too but Manuel has absolutely no funds to continue paying for the life-saving treatment the 1-month-old needs.

Dorothy, on the other hand, cannot wait to hold her baby for the first time.

Manuel and Dorothy’s 1-month-old baby cannot live without the continued treatment at the NICU. He needs to stay there for 6-7 weeks more and this would cost a total of Rs. 9.5 lakhs. To keep his son alive until now, Manuel has already spent over 2 lakhs and now, he is left with nothing. He needs your support to save his son.

Your support will save 1-month-old baby of Dorothy and will ensure that emerges out of the NICU alive. 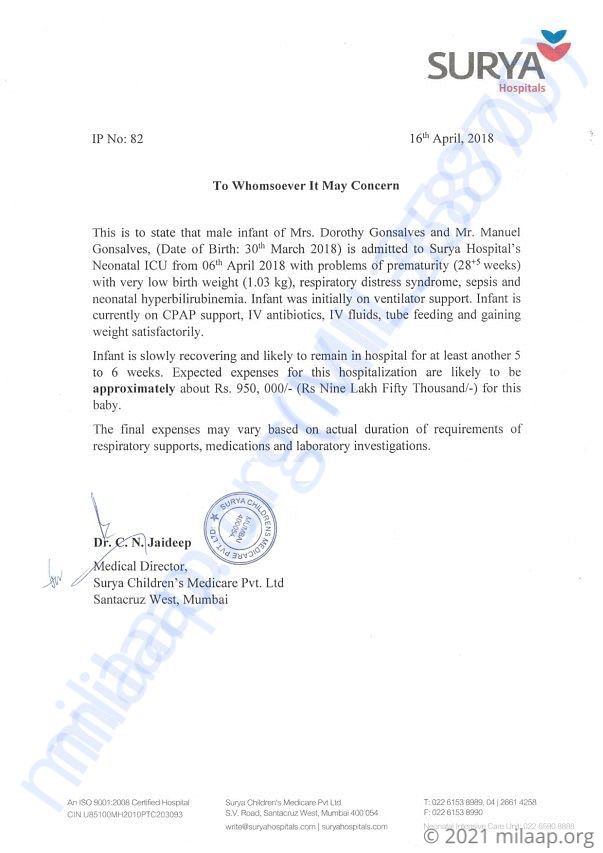 Thank you all so much for helping us!

My baby is doing well now. We took him for a check up last month and the doctors told us that he is doing very well and is completely fine now. They have reduced the medicines also, and now he only has to take two medicines. He is at home and we are all very happy to see him happy and healthy.

This wouldn't have been possible without all of you. Thank you all so much.

Thank you for the wonderful support that you have shown towards Dorothy's baby. The baby has gained weight (around 2kg) and is off respiratory support and is now on partial oral feeding.

We are stopping the campaign as per the families request as they would arrange funds from other sources. The funds raised via this campaign will be used towards his pending medical expenses.

Thank you once again for the wonderful support. Please do pray for his health and speedy recovery.

Scan & donate with any app
check_circle_outline Download payment receipt
Report fundraiser
Know someone in need of funds for a medical emergency? Refer to us
Rs.23,770 raised

15 Supporters expand_more
This campaign has stopped and can no longer accept donations.
$150 Million +
Raised on Milaap
Are you in need of financial support for medical or personal emergencies, or a social cause?
Start a fundraiser
Or
Know someone in need of funds for a medical emergency? Refer to us
Campaign organizer contact_mail
R
Riddhi
Beneficiary: Baby of Dorothy info_outline

Donated to this campaign via Bank transfer/QR Code? Click here if you can’t find your donation listed below.
PA
Preeti donated Rs.1,000

Everything will be fine by God's Grace

Donated to this campaign via Bank transfer/QR Code? Click here if you can’t find your donation listed below.
PA
Preeti donated Rs.1,000

Everything will be fine by God's Grace 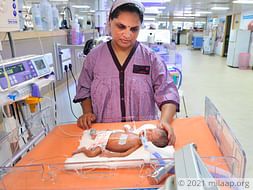 This Newborn Cannot Survive Without 6 Weeks Of Life Support