She Was Recently Widowed And Needs Help To Save Her Infant Son | Milaap
This campaign has stopped and can no longer accept donations. 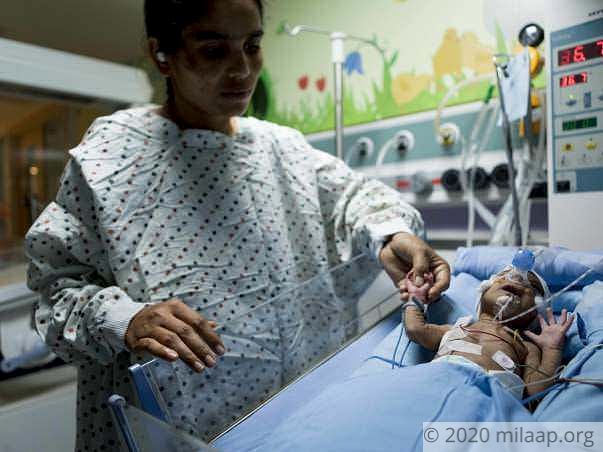 “A lorry hit them – Devyani was unconscious, her daughter had minor injuries but her husband was gone by the time I got there. His head smashed. His hands and ribs twisted and broken.”

5-months-pregnant Devyani came out of this terrible accident with only a leg fracture and minimal injury to her baby. When her son was born last month, Devyani came out of her shell of grief to nurse and play with him. Unfortunately, his lungs are not fully formed and he needs critical care to survive. Once again fraught with worry, Devyani is struggling to save him.

Devyani didn't know her husband had died for three months

Devyani, her husband Devi and her 2-year-old daughter Akshika were going to a wedding on November 26, 2017. It was a Sunday and and the rest of the family was following them. A truck swerved on the road and hit Devi and his bike. He was gone by the time the others reached them.


Devyani with her daughter and husband

Her parents didn't know how tell their 23-year-old, pregnant daughter and tried to protect her from the news for months. Unable to keep it from Devyani any longer, they told her the truth only in February. Heartsick with anguish, no one in her family was surprised when she gave birth to a son almost a month earlier. Her child's birth seemed to have pulled Devyani out of her shock.


“The 10 days before the baby was born, she cried all the time. But when he was born and was given to her, she smiled after days. Then the doctors tell us that the medicines she took when her leg was fractured has caused a bad infection in the baby and he's been put back in the ventillator. One pain after another is following my sister,” says Devyani's brother Prabhakar.

Making sure her baby gets treated is what keeps Devyani's crippling sorrow away. She may have lost her husband, but as a mother, she is determined to save her child. Though he may not be around, this purpose still connects her with her late husband.

Devyani feels helpless to save her child

Devyani's daughter is scared of the cast on Devyani's leg and only stays with her grandmother. Despite her family's support, Devyani feels alone and vulnerable. Her children feel like her only connection to the happy life she led even a few months back.

“I was married just for three years. Though I married young, I was very happy. My husband was a very kind person and now he is no more. All that is left for the future is to make sure that our children live and grow,” says Devyani.

Devyani does not have a job and her late husband's family has been unable to help them. Her father, a farmer in Karimnagar bears all the expenses of the treatment and even he can't afford to keep up treatment any more. He has already spent everything he had and paid bills worth Rs 7 lakhs. Though Devyani is determined to save her baby, she does not have the means to save him.

Devyani's baby is premature and has an infection in his lungs. He has a good chance of surviving if he gets ventilator support till he can breathe on his own. The baby is the one good thing in Devyani's bleak life right now. She needs our support making it through this tough time.

Your contribution will be the much-needed sign of hope for Devyani.
Estimation Letter 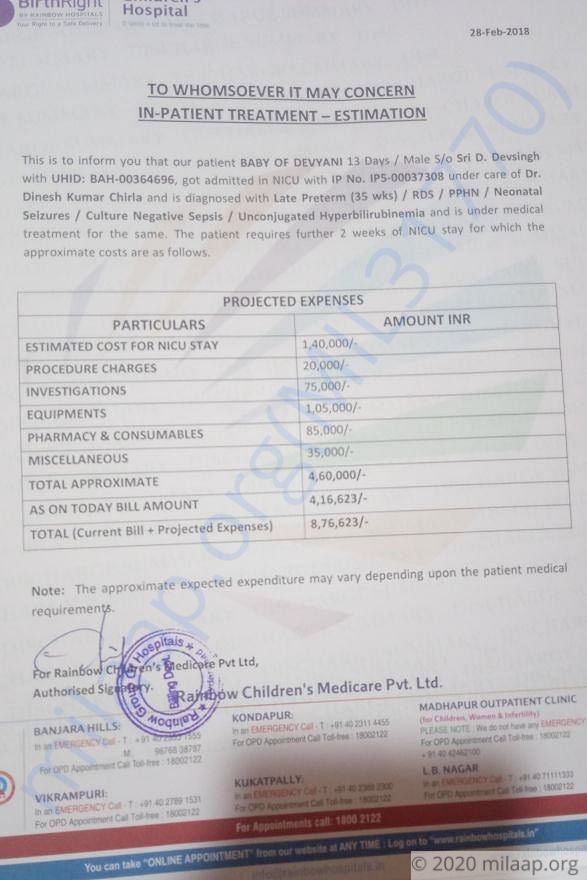 Baby of Devyani is currently at home and doing well. He's now recovered and living a normal life. The family was advised by the doctors for monthly check-ups, and there has been no complications so far.

Thank you so much,
Regards,
Prabhakar
Dear supporters,
Thank you all for your support.

Devyani's baby was discharged from the hospital on 18th April, currently he's at home with his mother and doing well. There has been a significant improvement in his health and he's being fed normally by his mother.
Doctors have suggested monthly check-ups just to keep a check on recurrence, so they will monitor his health in the coming months.

This couldn't have been possible without the support of all of you.
We sincerely thank each one of you for your love and support which you have shown towards Devyani and her baby in the most toughest time of her life.

Thank you for the support that you have shown towards my baby. He is doing better now compared to earlier. His health is stable and presently requiring only low flow oxygen support. He is expected to stay in the NICU is for 5 days.

Thank you all once again for the support. Please do pray for his health and speedy recovery. Will keep you posted. 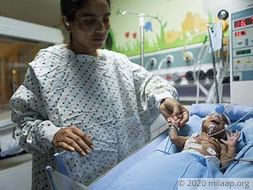