Nurse's 20-day-old Baby Is Now Bleeding Into His Lungs And Needs Help | Milaap
This campaign has stopped and can no longer accept donations.

“My 3 week-old-baby’s lungs bleed. Ever since birth, he has been on life support. We have never held the baby in our hands and we don’t know if he will live long enough to see us. Weighing only 730 grams at birth, his life, and our hopes, are hanging by the thread.”- Arunthathi

Born on May 3, 2018, at 31 weeks gestational age, the baby was struggling to breathe. Following the C-section, Arunthathi wished to see her son healthy. Her hopes were ravaged when she was informed of the boy’s condition. Ragu was at a loss for words, but Arunthathi’s experience as a nurse helped her deal with the shock.

Years of wait are slipping away into desolate cries

The moment of joy Ragu and Arunthathi had looked forward to, for four years, had just eluded them. Ragu painted houses, while Arunthathi worked as a nurse. They fell in love, but their journey to marriage wasn’t a bed of roses. The couple had to incur the wrath of families and face stigma and isolation.

“When I felt the whole world was against me, Arunthathi stood by my side and married me despite opposition from her family. I started as an illiterate painter and now work as lab attender, after completing a course. She has been my sole support. Today, she is consumed by fear of losing our son, even as she puts up a brave face,” says Ragu as he can’t bear to see his 3-week-old son’s face engulfed by tubes and plasters.

5 months into the pregnancy they began seeing signs indicating abnormalities

At 4 months of pregnancy, the baby’s growth was normal but panic crept in after the routine 5th-month scan, which was followed by another scan 10 days later. The doctors said that the blood flow through the umbilical cord wasn’t normal. As a nurse, Arunthathi realized that the 3 months ahead wouldn’t be easy.

“Each injection costed Rs. 400 and I needed one every day, for three months. That was more than what we could earn in 6 months. Other medical procedures meant we had to borrow money from friends, family and anywhere I could. Now, we are in debt of more than 3 lakhs.” Arunthathi

This baby boy, was born way too early. He is struggling to breathe on his own every minute and it is possible that he would succumb to this fight if his family cannot afford his treatment.


How can you help?

ICU stay can save the baby, but the parents have nothing left to pay for the treatment, which will cost them at least 13 Lakhs. Having been reduced to empty pockets and debt that is growing by the day, only your support can help the parents save their 20-day-old baby from the clutches of death.

Your support can help save Arunthathi’s baby. 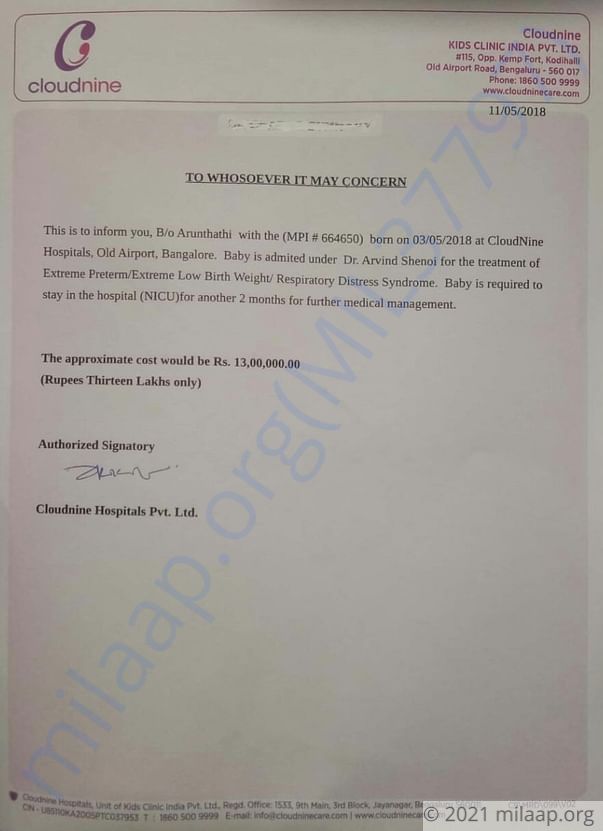 My baby passed away due to multiple complications he faced during his last days. The baby was fed with tubes, however, the baby could not digest the food and this led to breathing problems which led to complete blockage of lungs. Doctors tried their best but could not save him.

We are grateful for the love and support you have shown.
May his soul rest in peace.

Regards,
Team Milaap (as conveyed to us by mother -Arunthathi)
Donate
OR

Scan & donate with any app
check_circle_outline Download payment receipt
Report fundraiser
Know someone in need of funds for a medical emergency? Refer to us
Rs.139,150 raised

69 Supporters expand_more
This campaign has stopped and can no longer accept donations.
$150 Million +
Raised on Milaap
Are you in need of financial support for medical or personal emergencies, or a social cause?
Start a fundraiser
Or
Know someone in need of funds for a medical emergency? Refer to us
Campaign organizer contact_mail
SC
Savitha C
Beneficiary: Baby Of Arunthathi info_outline

SC
You are sending a message to
Savitha C
Go back