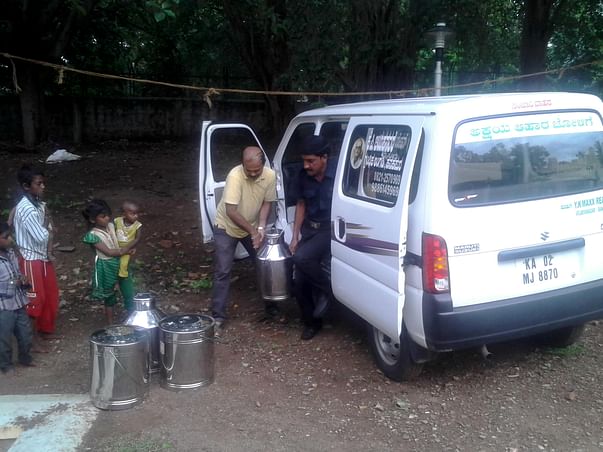 Persevering Mysurean : Connects Waste and Want, balances Surplus and Deficit.
This Mysurean collects excess prepared food from restaurants, marriage and party halls, and distributes it among the poor and the hungry.

As soon as the people see this vehicle entering their locality, they rush towards it to collect the food.  This is a common sight in several slums in the city.  In a city where tonnes of food gets wasted, H. R. Rajendra, a native of Tumakuru, Karnataka State,  has been trying to bridge the gap between waste and want for the past six years.  He collects excess food from restaurants, social gatherings, marriage and party halls, and distributes it among the poor, beggars, orphanages, construction sites, Govt. Hospitals and slums in and around Mysuru.How this thought for food came to him is an interesting tale.  Rajendra was returning home after attending a wedding 6 years ago, when he saw huge quantities of surplus food being thrown away in dustbins by the caterer of that function hall.  At another place, he saw street urchins eating leftover food thrown in the garbage. Deeply hurt and moved by these two scenes, he decided to collect the surplus food and distribute and alleviate the hunger of the poor and the needy. He started visiting and identifying slums, govt. run hospitals, pockets where poor people live and made a list of the same.  He visited marriage and function halls, big restaurants, hotels, and shared his contact number with them.  He requested them to hand over the surplus prepared food in their kitchens.His personal commitment to his passion of “not wasting surplus prepared food” is so intense, that he dropped his idea of constructing his own house and instead used these funds to recruit volunteers, drivers and vehicles to collect the surplus food and distribute the same.  Within a few months, he launched the Akshaya Aahara Foundation ( AAF).

He works in a Central Government office in Mysuru and fortunately has a 5 day week.  This has encouraged him to dedicate more time to the AAF.  He starts receiving calls from the morning till late nights, since caterers call only after the snack/lunch/dinner time is over.He visits schools and colleges to create awareness regarding preventing wastage of food, motivating students  to work as volunteers for the foundation at their convenience.

“ I have spent my savings for the foundation.  To take it further, I am planning to raise funds.  Some people contribute towards the cost of the fuel for the 2 vehicles we have, while some donate money.  An average of Rs. 60,000 is needed every month towards food collection and distribution costs”, adds Rajendra.Rajendra adds, “Surplus food received by us is free. Our hearty thanks to all the donors of surplus, prepared food.  But the cost of collection of the surplus food and transporting the same in our Mini Food Vans to the various places like Govt. Hospitals, Slums, Poor colonies, etc is quite high.  We want like minded people to donate for this worthy cause”.
In the initial stages of the project, he used to get few calls, but off late, he gets an average of 50-60 calls everyday, and they increase exponentially during marriage seasons.  There have been occasions when he has distributed 8000-10000 lunches ( including dinner) on a particular day.
During office hours, he forwards the calls to his wife Shweta, who arranges to collect and distribute the food.  Even his children support them during their holidays.
“Earlier I used to spend a lot of time with friends.  Nowadays, they help me in their free time.  I hardly spend time with my family or attend functions.  This passion has kept me busy round the clock.  There is an immense satisfaction in my life”, says Rajendra.
“A smile on the faces of hungry children in the slums and on the faces of patients’ caretakers at the Govt. hospitals nullifies all the pains I have taken during the day to collect and distribute the surplus food” says Rajendra with a humble but gratifying smile.
Rajendra has plans to start an initiative “Seeing Hands and Caring Minds”, under which he wants to serve afternoon lunch to the physically challenged or aged persons who are living alone.Those who wish to make donations or handover excess food ( in Mysuru city), can contact Rajendra at the following address.
Akshaya Aahara Foundation(R) ,
No. 143, Moksha Marga, Siddhartha Nagar,
MYSURU-570 011.   Phone : 0821 – 257 0969,  91489 87375
Email : akshayaaahara2012@gmail.com
Our motto is “ Waste Not, Want Not.  Food Waste, Not in Good Taste “.


“ A hungry person understands no other language other than food”.  M.K. Gandhi.

UPI: rzpy.givetomlpakshayaa001@hdfcbank (Copy to clipboard)
Or
Click here to read the instructions before you make a bank transfer. 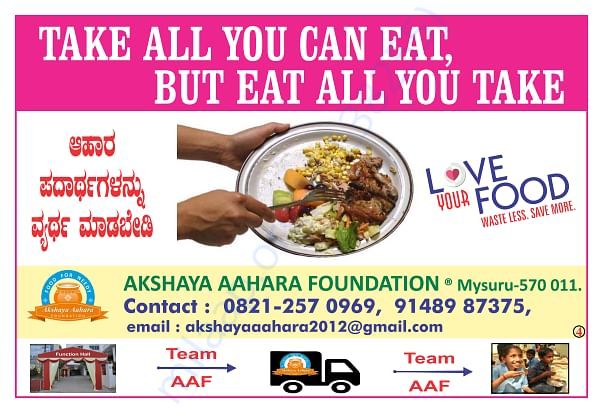 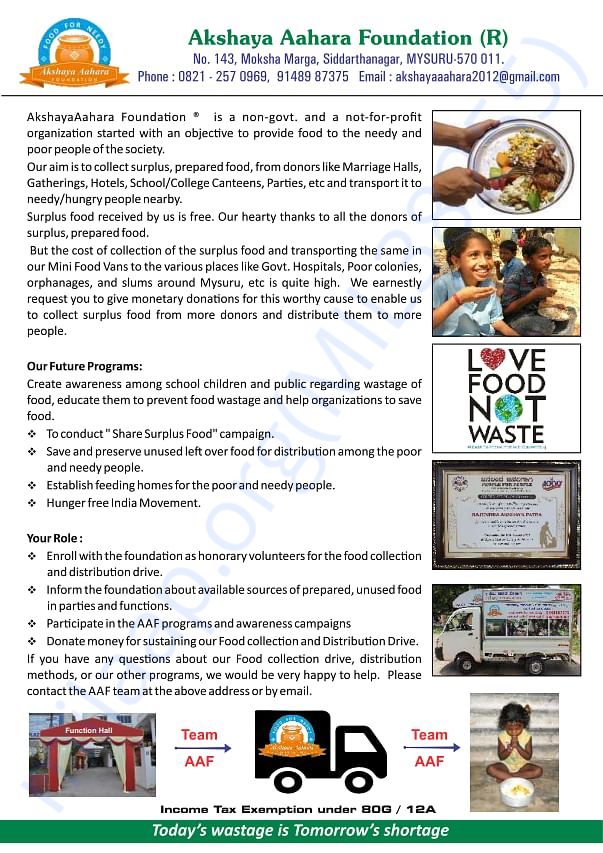 Vessel cleaning to get ready for next food collection drive 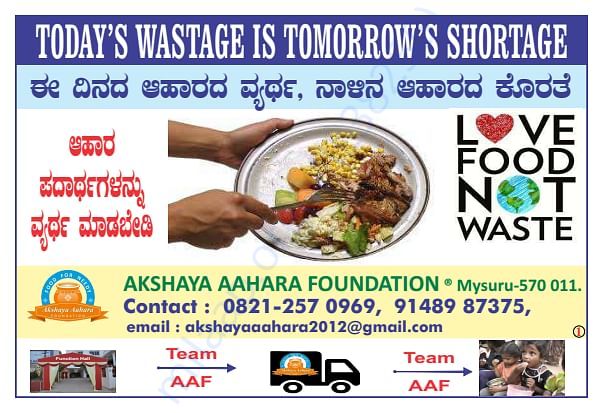 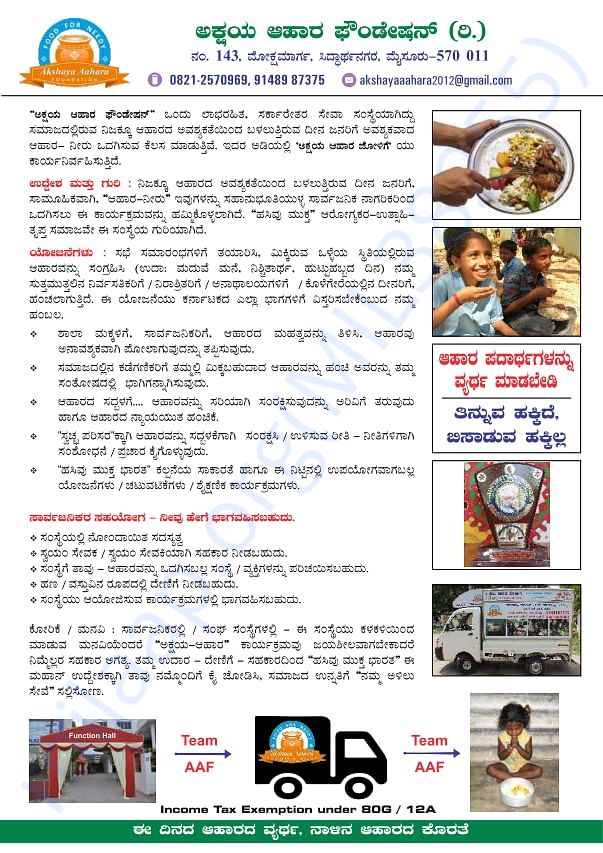 UPI: rzpy.givetomlpakshayaa001@hdfcbank (Copy to clipboard)
Or
Click here to read the instructions before you make a bank transfer.

Report fundraiser
See how thousands are crowdfunding for their causes on Milaap
Rs.1,621 raised

Donated to this campaign via Paytm? Click here if you can’t find your donation listed below.
HP
Hanshitha donated $20
A
Aparna donated Rs.200

Keep doing such good work. May your tribe increase

Donated to this campaign via Paytm? Click here if you can’t find your donation listed below.
HP
Hanshitha donated $20
A
Aparna donated Rs.200

Keep doing such good work. May your tribe increase

You are sending a message to
Vishwanath Ananthram
Go back 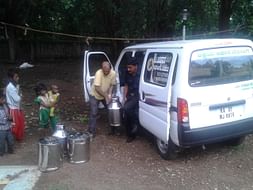