Despite Being On Ventilator, This Baby Boy Will Die Without Help Now | Milaap
This is a supporting campaign. Contributions made to this campaign will go towards the main campaign.

Despite Being On Ventilator, This Baby Boy Will Die Without Help Now 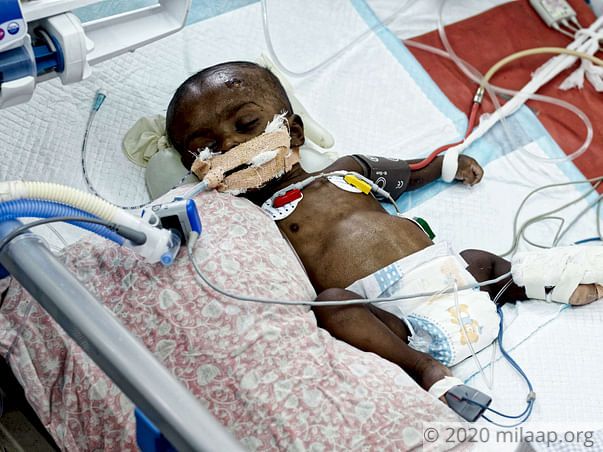 “It’s been 20 days that my baby has been on the ventilator support. Tubes have been inserted painfully through his throat and nose so that he can breathe and feed. When I held him for the first time, I never imagined that I will see him in such a painful condition. I keep standing by him as long as I can. When he wakes up, I just want him to see me and know that his mother is waiting for him. Although my legs give away, but what can be more important than being close to my dying baby,” - Soma, 5-month-old Amlan’s mother.

The new parents’ happiness didn’t last for even 5 months, and now they are devastated

Soma and Nirmal were happy in their own little world in Dumdum, Kolkata. After a few years of their marriage, when they were about to welcome baby Amlan. After all, it was their first child. Nirmal started working longer hours so that he could do everything for the baby. But they had no idea that their happiness will be so short-lived.

At 3 and a half months, Soma took her baby for monthly vaccines. There she found that baby Amlan is underweight. Worried, she took him to the doctors. But the medicines that the doctors didn't help him much. Soon, he also had a severe cough and started throwing up whenever he coughed. After multiple tests, the doctors told Soma that her baby has severe pneumonia.


“I thought that he will become fine in a few days. But my baby’s condition was deteriorating so much that he had to be on ventilator support. He could no longer breathe on his own. My little baby can’t take so much pain. Without the ventilator support, he can't live now.”

Along with pneumonia, baby Amlan also has a hole in the heart. He needs a corrective surgery for his heart too once his condition is stable.

Despite going on the streets to borrow money, Nirmal can’t arrange enough to save his son

Nirmal works in a printing press. His income varies from Rs 3,000 to Rs 10,000 depending on the volume of work he gets every month. With no fixed income, it was difficult to manage even the basic needs. He has already borrowed more than a lakh in the past 20 days. He needs another Rs 2.5 lakhs to keep his son alive. He goes out to collect funds every day in the morning. He is forced to leave his wife alone at the hospital. The young parents are fighting a tough battle every day only to keep their baby alive.

Baby Amlan is fighting for his life and needs ventilator support. His poor parents live in fear of losing him without any help. With your help, Baby Amlan's life can be saved.

UPI: givetosomasahadas3@yesbankltd (Copy to clipboard)
Or
Click here to read the instructions before you make a bank transfer. 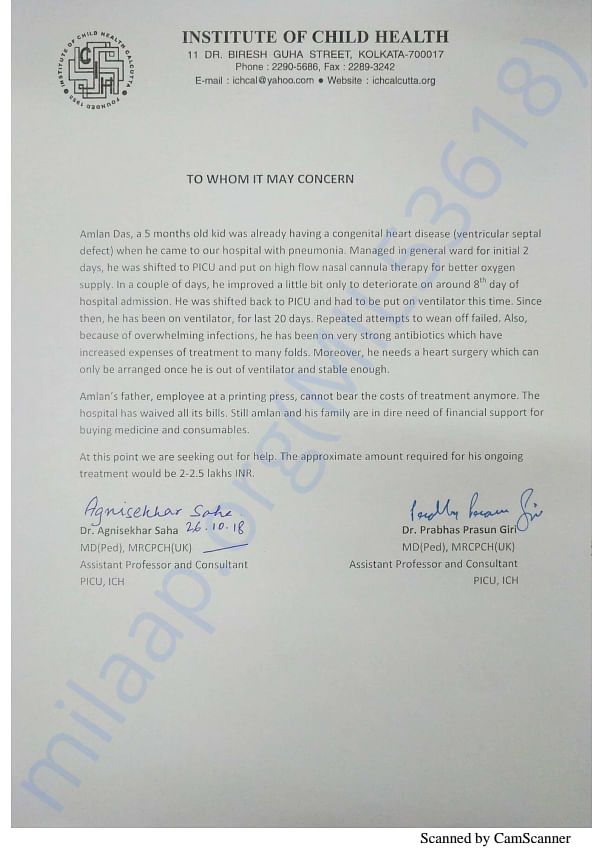 UPI: givetosomasahadas3@yesbankltd (Copy to clipboard)
Or
Click here to read the instructions before you make a bank transfer.

Amlan is out of pneumonia now and is under medication. The family will be visiting the hospital for regular check-ups.

Amlan is at home and is doing well. He still needs medications and regular check ups.

Amlan is doing well and is on medication now. Amlan is recovering and is responding well to the treatment.

Thank you for the support. Amlan has to undergo a heart surgery soon, please keep supporting us and sharing the campaign. 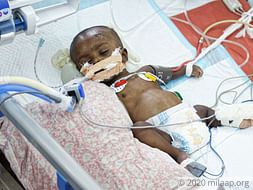 Despite Being On Ventilator, This Baby Boy Will Die Without Help Now