Just For Kicks's online fundraiser for Sports | Milaap
This is a supporting campaign. Contributions made to this campaign will go towards the main campaign. 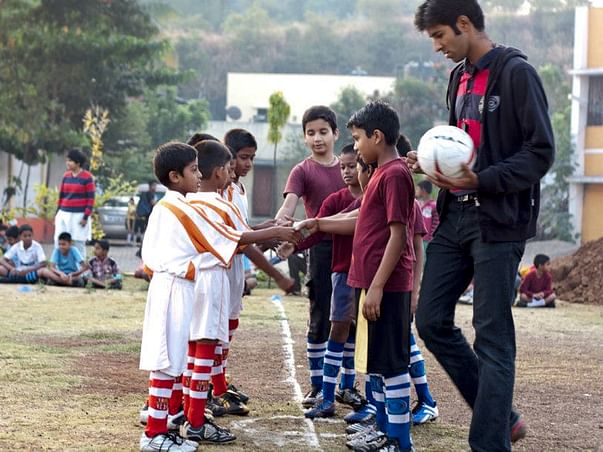 The idea of Just For Kicks was born in our minds in 2011 when we served as teachers in low income schools in Pune, India. As teachers constantly looking to instil a sense of community in our classroom, we turned to football to provide the impetus. Within a few months of kicking off the program, we noticed a positive change in the classroom culture with students working as one unit. Academic performance, classroom behaviour, social skills, attendance rates increased by leaps and bounds. We knew we had a winner here. Having won the Design For Change Award in 2011, the program has now grown to a hundred schools across three cities of India - Pune, Mumbai and Hyderabad.
Having been teachers ourselves, we strongly believe in the power of sport in creating a huge impact in the education space. The game becomes a third place to the children - beyond the struggles of home and pressures of School - to express themselves freely and come into their own. At the same time, we also believe that Just For Kicks can serve as a launch pad for some of the hidden talents in our country - a platform our country desperately needs.

We identify schools that cater to under resourced communities - both public and private schools - and match them with a coach. The coaches work closely with the teachers and the children to develop teams of 10 each in various divisions (junior, senior, super senior - boys and girls).
Coaches train the students using our life skills based football curriculum while working closely with both parents and teachers to build a cohesive culture. Schools which do not have playgrounds are provided access to nearby grounds and students are provided with all the necessary gear to play, as well. The training period spans four months of fall during which the teams play friendlies with other teams from different parts of the cities.
In the beginning of Winter, we kick start the league when teams from a cluster play home and away games against the other teams that culminates in a nation wide tournament. During the tournament, we bring in scouts from different parts of the World to watch the talent and potentially provide scholarships for further development.
We have partnered with the DSK Liverpool International Football Academy, Huracan Foundation, Teach For India, Tech Mahindra among others to provide the highest quality to every student in our program.
We are looking to raise the money on Milaap to fund this year's league and tournament operations. Your funding will be utilized for:
a) Football gears to all students
b) Fees of the professional coaches
c) Nutrition requirements of Children
d) Transportation for league and tournament
e) Logistics of league and tournament
You can also be a team owner through a direct donation of USD 200 (INR 12000). You will be matched to a team of your choice and will serve as a mentor to them apart from funding. If not an IPL or ISL team, how about owning a kids' team?
Ask for an update
Donated to this campaign via Paytm or bank transfer? Click here if you have not received an email confirmation from Milaap.
Hello all,

Thanks for choosing to support Just For Kicks. It has been a long journey for us, going from 4 cities and 1500 kids when we started the campaign to 6 cities and 3000 kids today. We have 93 trained coaches in the system, 14 employees working hard to bring our vision alive, and an equal representation of girls and boys in the program.

Feel free to reach out to us if you'd like to receive updates more regularly or in case of any further queries.

Sincerely,
Vikas Plakkot
Co-Founder
The funds, as requested, will be utilised to support a team in the Whitefield region of Bangalore
Hello all,

Thanks for the incredible support you all extended to us last season (2015-16). We set out on a target of 15 lakhs and met it with right before our championships got underway.

This past year, we utilized the funds to:

- Provide training equipments to schools for the program
- Provide factory-made studs & shin guards for 1520 children who are part of the JFK program in 4 cities
- Support our coaching needs (15% of the entire needs were covered by the funds raised through this platform!)

We conducted 32 sessions on average for each team in the program, totalling to more than 2000 sessions across the year in all our sites. We've taken giant leaps in building the basic life skills among these kids through the sport, thanks to all your support.

This last season, we conducted one of the biggest leagues in the country - School Football Championship (www.sfcleague.com) where teams from elite schools were pitted against the teams from JFK. Incidentally, in 4 out of the 10 divisions, our JFK children emerged national champions - something that has proved the power of the sport.

Here's a quick highlight video from the finale that you'll all enjoy - https://www.youtube.com/watch?v=Cwmd61bAI_g

We're also happy to announce that 4 kids from our program will be making a trip to Crystal Palace FC, London in August 2016. This is just the beginning of something fantastic - we hope each of you continue to support us this year as well!

Keep up the good work Ramya

Wonderful initiative! Would like to sponsor a team from Pune please.

I only wish that more and more children can benefit from such a wonderful venture! :)

To sponsor a team

Fantastic initiative! All the best.

Keep up the good work Ramya

Wonderful initiative! Would like to sponsor a team from Pune please.

I only wish that more and more children can benefit from such a wonderful venture! :)

To sponsor a team

Fantastic initiative! All the best.

You are sending a message to
Just For Kicks
Go back 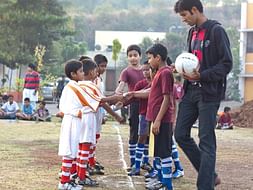