They Were Told He Will Die But These Parents Now Have Hope To Save Their Child | Milaap
loans added to your basket
Total : 0
Pay Now

Shares
Shares
Share on whatsapp
Like any other family, this family also rings with the laughter of their children. The siblings play, laugh, fight and get scolded at but behind this absolutely normal life lies hidden the pain of Venugopal suffering from a disease that has no cure but a transplant.

We thought it was just a stomach infection

At the age of 1, Venugopal suddenly started to have fever, diarrhea and vomiting. What was thought to be a stomach infection initially, turned out to be something dangerous. Tests revealed that he has thalassemia - a severe blood disease. A bone marrow transplant is his only cure.

They said the transplant might not be a success, we were scared to go ahead with it

In 2009, one of the hospitals told the parents that the transplant is risky - it can even cost him his life.  The fear of losing his child kept Ramu, Venu's father, away from the thought of a transplant. Since then Venugopal has been living on  blood transfusions once in 15 days.

“He wants to be a soldier, with what heart should I tell him that his disease won't let him achieve his dreams," - Ramu, father.

An old pic of the family

Venugopal wants to be a soldier and serve in the army. Venugopal's dreams makes his mother proud but his father cries thinking of that his son might never realize that dream.

Without the transplant, his organs will be shutting down one by one

Ramu would do whatever possible to keep his son alive till his last breath but is fearful what might happen to him next. The doctor explained to the desperate father that only a transplant can help him live a life without fear of dying each day. If the transplant is not done soon his organs will start to fail.

Ramu observed the people around him with successful Bone Marrow transplant and put aside his fear of the operation that stayed with him for years. The family went in for tests and his sister was a perfect match. She is scared but she wants to save her brother desperately.

Ramu is a vehicle cleaner and earns only Rs 10,000 a month out of which Rs 7000 is spent on the monthly treatment of Venugopal. They barely manage with the rest for their survival. Balamma, the mother works as a daily wage worker in farm but due to her health issues can only manage to go for 5 days in a month at max and rest stays at home feeling helpless. The transplant will cost them 15 lakhs and despite of having the hope they are helpless.

Only with your help Venugopal can end this misery with a win and live rest of his life making his dreams come alive with nothing as a barrier.

The specifics of This case have been verified by the medical team at the concerned hospital. For any clarification on the treatment or associated costs, contact the campaign organizer or the medical team. 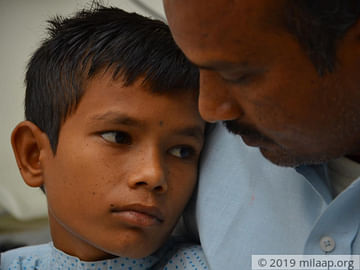 Soon Venugopal's Organs Will Start To Fail,He Needs Your Help

Venugopal's sister is a perfect match for the bone marrow transplant but financials are a barrier.

UPI: givetoramudonation1@yesbankltd (Copy to clipboard)
Or
Click here to read the instructions before you make a bank transfer.