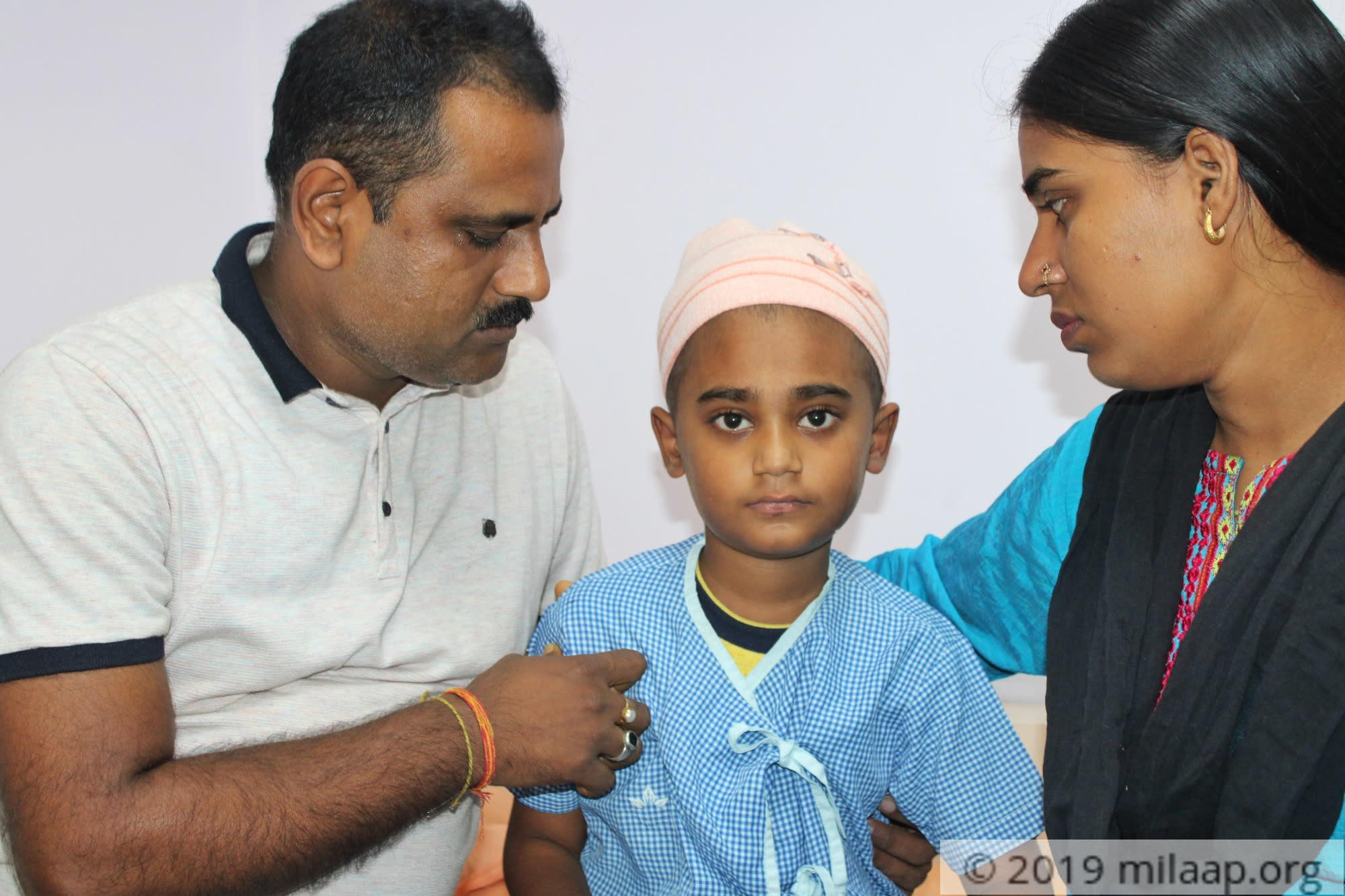 Share
A 36 mm large brain tumour has ravaged 9-year-old Barshan’s life, leaving him very ill and weak. Even watching TV or playing on the phone for more than 15 minutes, triggers a painful headache that leaves him unable to eat or sleep. He already had two surgeries to relieve him of the pain. A surgery that removes his tumour is the only thing left and also the only thing that can save him.
Barshan with his mother Babita

Barshan was rushed to Bangalore for an emergency surgery

“His condition was critical and he was in so much pain that he was screaming. He couldn’t eat or keep his eyes open. The doctor asked us to rush him to Bangalore in a flight. The next day, he had a surgery that cut open his skull and reduced the pressure in his head. But it is only a temporary solution till the tumour is removed.” – Pinku, Barshan’s father

Barshan lives with his parents and a little sister in a small town in Malda, West Bengal. His illness started with a headache and difficulty with reading. His parents took him to an eye-doctor who told them that this was a problem in the brain. By the time his condition was diagnosed, he had to be taken to Bangalore for his first surgery.

The tumour has taken a toll on Barshan. As the tumour grows, his brain painfully presses against his skull. He has had two surgeries to just to ease the pressure. He has lost weight and spends the whole day resting in bed. He is scared of surgeries and asks his parents if there is any other way he can get better but sadly there isn't.

“He was always a quiet and thoughtful child, but these days he barely says anything. He is too tired to even play with his sister. We allow him to watch some television, but that stresses his brain, so he goes back to bed in some time. Before it is too late, somehow, I am praying to arrange for a surgery.” – Pinku

He only has a month for the surgery

Pinku works in a rice mill. In a month, he earns Rs 5,000 doing manual labour. They were simply not prepared for their child to fall so sick with an illness that could take his life. Only with a lot of determination have they been able to afford his treatment and save him.  They have borrowed over Rs 6 lakhs for treatment till now and can't any further.

“I am a minimum wage labourer. Spending on two surgeries till now was possible because I begged for money from everyone I know. Even if I work my whole life I don’t know if I will make enough to repay all that I have borrowed. How much more can I ask from people who have kept my son alive till now? ” – Pinku

Barshan needs to get a surgery as soon as possible. Despite all his efforts to take care of his sick child, Pinku cannot save him withoutn your help. The surgery will cost them 7 lakhs more. You can help.