Tales from the Field: Pongal Celebrations

So far, for me Pongal meant the sugarcane season. Of course, I know it is a big harvest festival in Tamil Nadu but I may not have thought much about the ‘harvest’ aspect. Last year in 2015 fortunately, I watched the action from the front-seat.

For those of you who don’t know, Pongal is a dish. There are different kinds of Pongal, sweet, spicy and the kind that is made for the cows. Pongal takes place over four days from Jan. 14-17, the last day of the Tamil month Maargazhi to the third day on the Tamil month Thai. The first day actually coincides with Makara Sankranti, which is a winter harvest festival across the rest of the country.

Even though the holiday extended into the weekend, and I could go home I decided to stay back and visit my neighbours who had invited me. They refer to the festival as Tamizhar Thirunaal, which means ‘the festival of Tamilians’.

The first day Jan 14, is the day of tying kaapu. The kaapu, is a plant reed tied with different leaves and flowers. It is tied in homes, farms, cattle sheds, vehicles, etc. This officially marks the beginning of celebrations. The kaapu is an auspicious ritual in Pongal tied for a prosperous year. 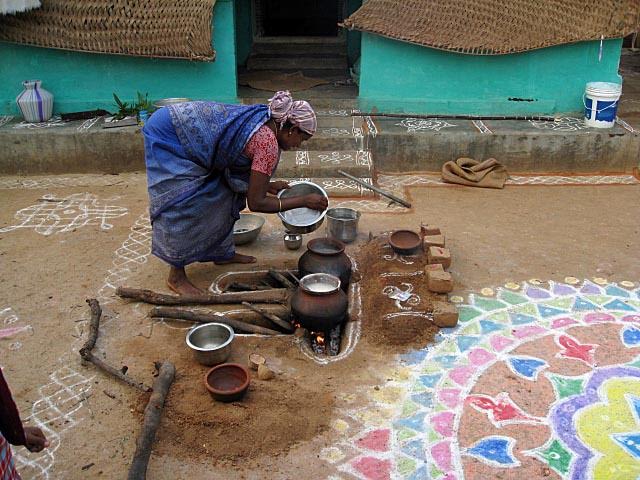 On 15th, people start their day by making beautiful kolams, or rangolis, outside their houses. They fill it with lovely, vibrant colors. Pongal is made at home and offered to God. People visit their relatives and exchange gifts and sweets. Parents of newly married daughters visit her in-laws house to offer, what is called, pongal seer, which are the items required for making pongal.

This is so their daughter can make Pongal at her new home. She is given a sack of rice, a big pot of steel or mud, lentils, dried fruits, ghee, etc. Parents will give their daughter the pongal seer for three years after her wedding and when she has a baby. I accompanied my cook, Chellamma, to her daughter’s husband’s house, following the ritual, since she gave birth to a baby boy last year.

The main day of the festival, according to my neighbors, was Jan 16, which is called Maatu Pongal. Maatu means cow. Everyone who owns cattle, will bathe their cows and goats and decorate them with colors. Painting their horns is a ceremony in itself. This is the main event of making pongal, since it is offered to the cows. 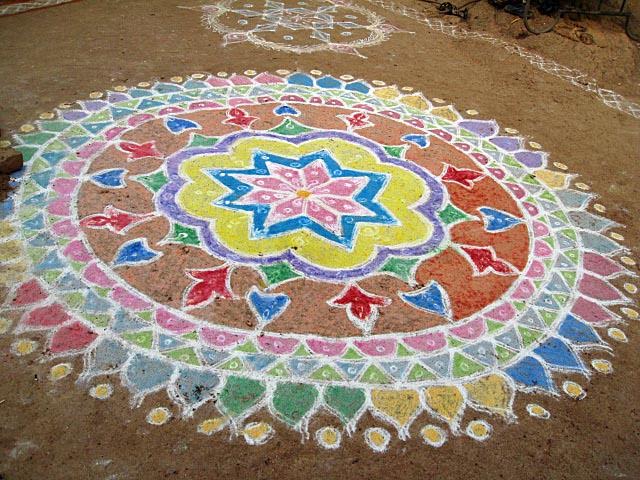 People cook the feast in mud pots in the evening outside their houses. All the cattle of the village are gathered together and decorated with garland, manjal thanni (tumeric and water) and oil. Kumkum is applied on the cow’s forehead and it is fed a mixture of venn pongal, jaggery, honey, fruits etc. after which it is taken to the temple. By the time they are brought back, the pongal at home is ready.

An important event in pongal is seeing it boil and spill over in the hope of a year overflowing with prosperity. The first serve of the feast is offered to the cows, only after which do the people of the house eat. Chellamma told me a little story about the reasons behind Maatu Pongal. It is because throughout the year, the cows are worked very hard. They work in the sun and sometimes fed bad fodder. The Gods, at the request of the cows, decide to descend to Earth every year on the same day, to inspect how their beloved animals are being treated.

Out of fear of being reprimanded, the owners offer their best services to their animals on that particular day. Even someone who is broke will buy fresh fodder for their cattle, and eat only after they’ve fed the cows first. I felt sorry for the cows when I heard the story, since they are effectively proved to be liars to their Gods. Of course, it is all in good spirit. When the cows are fed, people traditionally scream “Pongalopongal” with joy and cheer.

The next day people make delicious food and laze around. They also organize and participated in games and entertainment, such as the jallikkattu or taming the wild bull, kabaddi, dance-offs etc. I retreated with Chellamma to do what I do best in times like this, eat my sugarcane.

Your loan can help a woman farmer purchase seeds and fertilizers that can give her a better, more...