Why Mothers in Musiri Cannot Sleep Peacefully at Night | Milaap

Why Mothers in Musiri Cannot Sleep Peacefully at Night

A Day in Saraswathi’s Life

Even before the sun stirs in the sky, Saraswathi, a daily wage laborer from the Musiri district, is awake. She likes to leave the house while it is still dark. Taking her still sleepy daughters with her, she makes her way to the closest fields, which requires covering a distance of nearly two kilometers. This is the only way she can relieve herself in private.

But leaving the house while it is pitch black outside comes with its own risks. Saraswathi never feels safe at this time. There have been instances when she has spun around, afraid that someone was following her. During the rare times that her daughters go alone, she is filled with fear and anxiety until she can see them walking back to the house. There are so many stories of girls getting molested and stalked by older men.

If there was a way Saraswathi could accompany them every time they went to the field, she would. Unfortunately, she cannot compromise on work. If she does, her family loses a whole day’s wages. Additionally, her daughters are growing up and they are embarrassed by the fact that their mother has to stand guard while they relieve themselves.

Saraswathi made a choice

Two streets away, another mother, Chandra, faces similar woes. Owning a toilet was a luxury unheard of. But everything was to change when she met Saraswathi and the subject of their daughters’ lack of safety came up. It turned out that nearly every woman in the village was plagued by the same perils. Together, they decided to make a change.

Their plan was to install toilets at home. But none of these women can afford a toilet on their meager salaries. For now, they can only hope for a day when this becomes a reality. After hearing about how loans from GUARDIAN and Milaap changed the lives of families in the nearby villages of Tiruchirapalli, they realized things could change for them too.

Saraswathi and Chandra have served as an inspiration for twenty-eight other families from Musiri. Together, these women have decided to take loans and improve the lives of thirty families but they need your support.

Constructing a single toilet costs Rs. 14,000. Milaap’s goal is to fund these thirty families by this festive season. One small contribution from you can rid so many women of their worries and fears. Not only will you be helping young girls and women remain safe on a daily basis but you will also play a role in changing their lifestyle and health forever.

The borrowers will repay whatever you lend them. So by lending a small amount of money, you are not just donating to a family, you are empowering them to fulfill their goals. Milaap has successfully worked with GUARDIAN in the past, bringing toilets to thousands of families across Tiruchirapalli. Join the journey to improve the lives of families in Musiri. 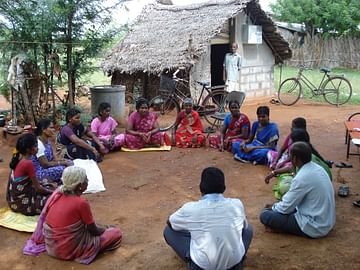 Saraswathi and her friends dream of a safe future for their daughters. Here's what you can do to...

Donate Learn More Before You Lend