5-Year Old's Damaged Liver Has Left Him Blind In One Eye And Bound To A Bed, Urgent Transplant Is His Only Hope | Milaap
Receive tax benefits by donating to this cause.

5-Year Old's Damaged Liver Has Left Him Blind In One Eye And Bound To A Bed, Urgent Transplant Is His Only Hope 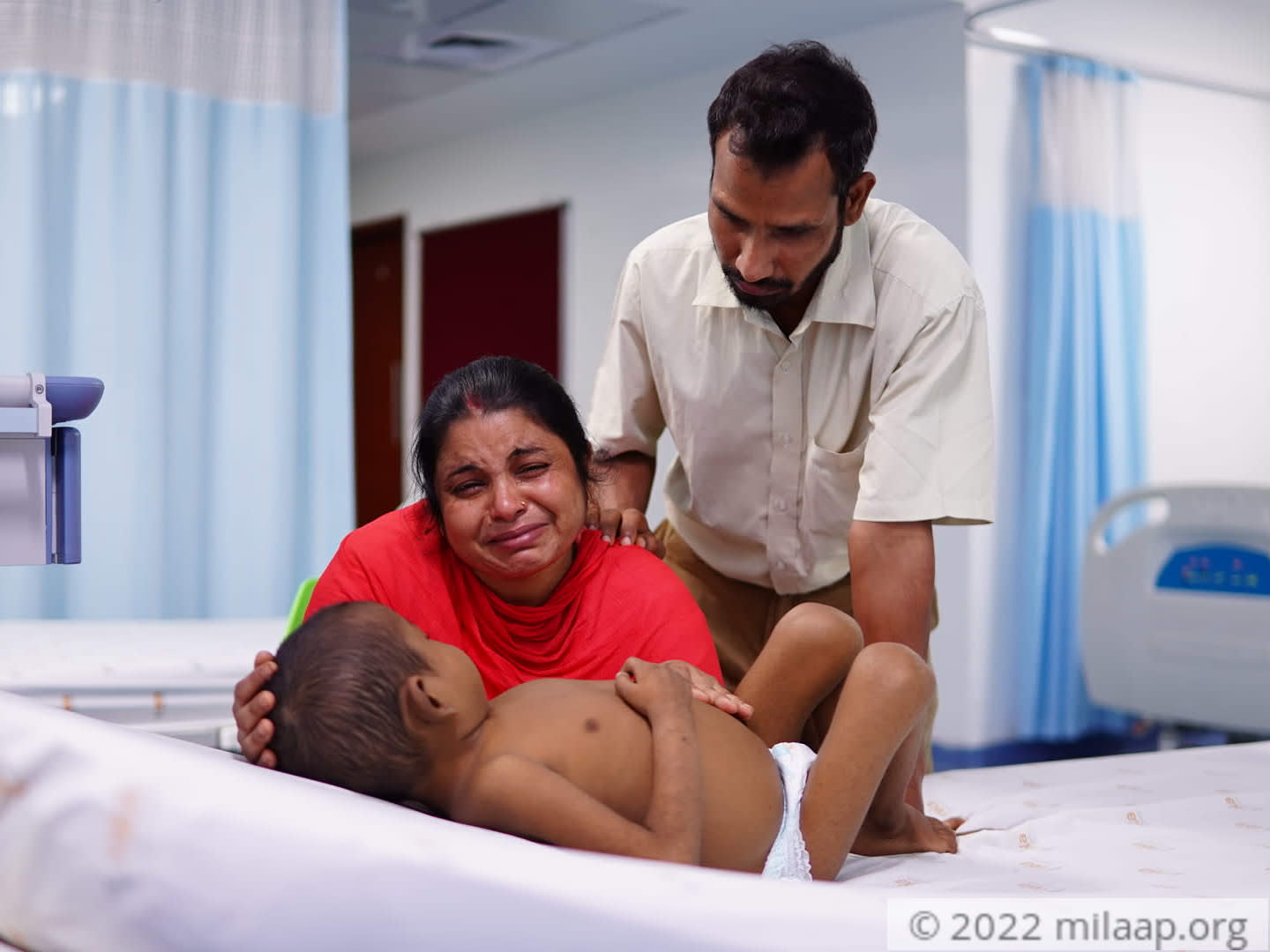 A year ago, Yash's left eye started bleeding out of nowhere and within hours, he lost his vision. His parents couldn't believe what was happening before their eyes. Then suddenly, his father heard a cracking sound, unaware of another tragedy awaiting this little boy.

"I woke my husband up in the middle of night, terrified by the sight of blood oozing out of my son's left eye. The pain was making it unbearable for him to even open his eyes. He tried getting up but, even with my support, he couldn't lift himself up. Before we could do anything about it, my son lost his vision and his hip joint had become so brittle, that it just cracked. In a matter of a day, our whole world collapsed around us… my 5-year old is now blind and bed-ridden." - Pammi, mother

After losing his vision, this little boy is now bound to his bed forever

Yash was just a few months old when his liver started scarring. Now years later, his symptoms have begun to threaten this little boy's life. Today, his limbs are uneven and incapable of holding up his own body weight. His blood pressure has already damaged his eyes and enlarged his liver. Grappling with such severe symptoms, it's a miracle that Yash is still alive with his completely damaged liver.

'With my son being tormented daily, my own health is the least of my worries'

Pammi's health has been deteriorating too because of her kidneys stones. The doctors have warned her to eat and hydrate herself well to avoid surgery.

"My ailing son is tormented by his progressing liver issues daily. There is no mass left on his legs at all and his vision is turning blurry as days pass. He is just 5 and can't even explain what is going on in his mind. Amidst all of this, I live with the constant fear of losing my son as we are struggling to arrange 22.5 lakh of rupees. My own health is the least of my concerns right now." - Pammi, mother

With their son battling for his life, this husband worries that his wife will slip into depression

"My wife hasn't slept for days because the itchiness that Yash often feels worsens from late evening onwards. All of it has put her in a depressive state and she is already on pills for that, but even medicines won't work until our son's transplant happens. I pity her because sometimes I do get a chance to leave the hospital and put my mind somewhere else to just breathe, but my son doesn't let my wife leave his side even for a second." - Ashok, father

Their son has more medical files piling up at this age than school books. The only way to put an end to his misery is a liver transplant, and it needs to happen at the earliest.

"If only I knew how lack of time and money would cost me so dearly, I would have taken up a private job rather than taking up tuition for kids around in my locatlity. I could arrange only Rs. 8,000 out of the Rs.15,000 needed for his plaster and just because of that delay, his broken bones didn't get the right support and deformed his legs forever. Those words tore me apart when the doctor said that if I got my son treated earlier, his legs and eyes could have been saved. Now with lakhs of rupees yet to be arranged, I don't know where else to go." - Ashok, father

Ashok and Pammi haven't gotten a chance to talk to their daughters in the entire last week. They don't know if they will ever be able to take their son back home to meet his sisters again. The only hopes they are holding up with now is that with a liver transplant, their son might be able to regain his stregth to get back up on his feet and have his vision improve. But that can only be possible with your contributions.