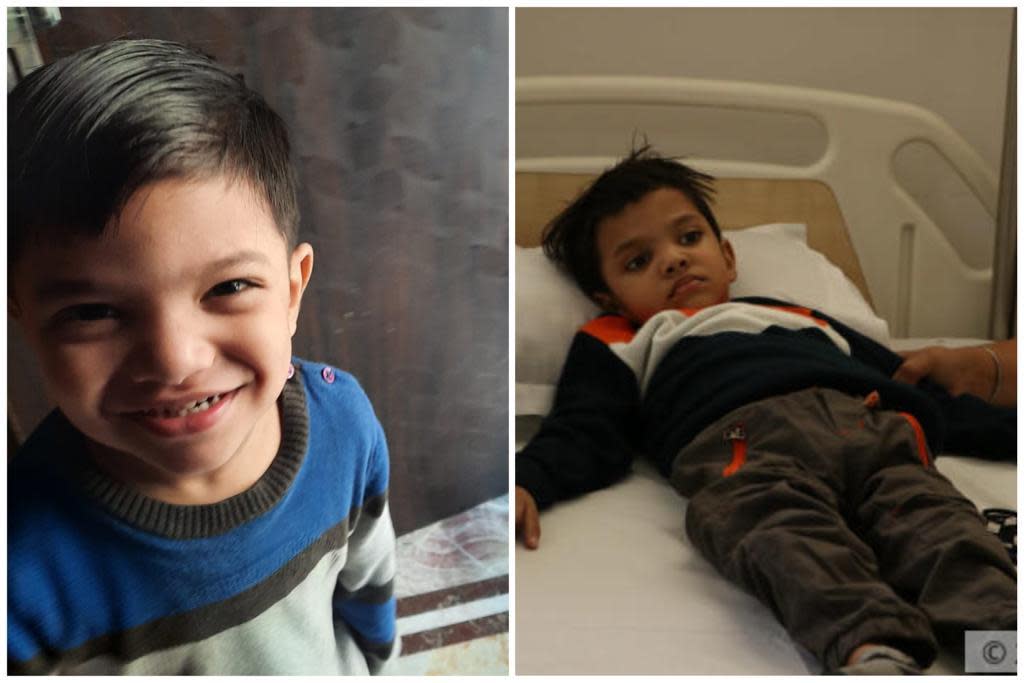 Share
Vikash and Meenu were only 2 years old when polio took away their ability to walk. While Meenu could move slightly with the help of crutches, Vikash was paralysed from the waist down and is confined to a wheelchair.
Nonetheless, they grew up to be independent and confident people, despite their disability. When they met, they felt an instant connection, and soon, they were married.
After having children and being able to give them a happy life, nothing seemed impossible for them. But everything came crashing down when their 3-year-old son was diagnosed with cancer.

In December last year, 3-year-old Vihaan complained of extreme pain in his stomach. He couldn’t sleep for 3 consecutive nights and vomited multiple times. No medicines could give him relief, and he was later diagnosed with intestinal obstruction for which he had to undergo immediate surgery. What seemed like a passing cloud was just the beginning of this poor child’s painful journey.

“After the surgery, doctors said he would be fine, but less than just 15 days later, before he could even recover, his symptoms were back. The doctors themselves were shocked to see 2 more tumours in his intestine. They couldn’t believe it and neither could we. But then he was diagnosed with high-grade cancer and it all started to make sense.” - Vikash, father

Vihaan is traumatized by the surgeries and has stopped talking

Vihaan was diagnosed with Burkitt's Lymphoma, an extremely rare cancer that spreads aggressively. It is associated with impaired immunity and is fatal if left untreated. Vihaan has already been through a lot - 2 major surgeries for 3 huge tumours. It has traumatized him and left him quiet.

“He didn’t speak a word for 3 months. The hospital staff would often ask us if he was mute. The pain and the treatment was very rough on him. I don't want him to go through that ever again. Only chemotherapy can save his life and help him beat cancer. But we can’t afford it.”

It is like a war for us, physically and financially

“Being handicapped, it is a daunting task for us to take our son to the hospital regularly. We have no one to rely on and have to do everything on our own. We fear for his safety; we are always afraid for when and if he has an emergency and we can’t take him to the hospital on time. It is like a war for us, physically and financially. We are unable to keep up with the expenses.”

Vikash is a private employee and his salary is barely enough to cover the medicine cost, let alone the entire treatment. He has already sold everything he had of value and taken loans, but it is not enough.

“The only thing I am left with is my car. I can’t sell it even if I want to, it is the only way I can carry my son to the hospital. I don’t know what to do now. I feel so helpless and lost. You are my only hope. Please help us!”

You can save Vihaan from the clutches of cancer and give him a chance to live a normal life again. These parents can't save him alone. They need your help.
VS
Patient Vihaan Sharma is 3 years old, living in Jaipur , Rajasthan
MH
Being treated in Manipal Hospital, Jaipur, Rajasthan