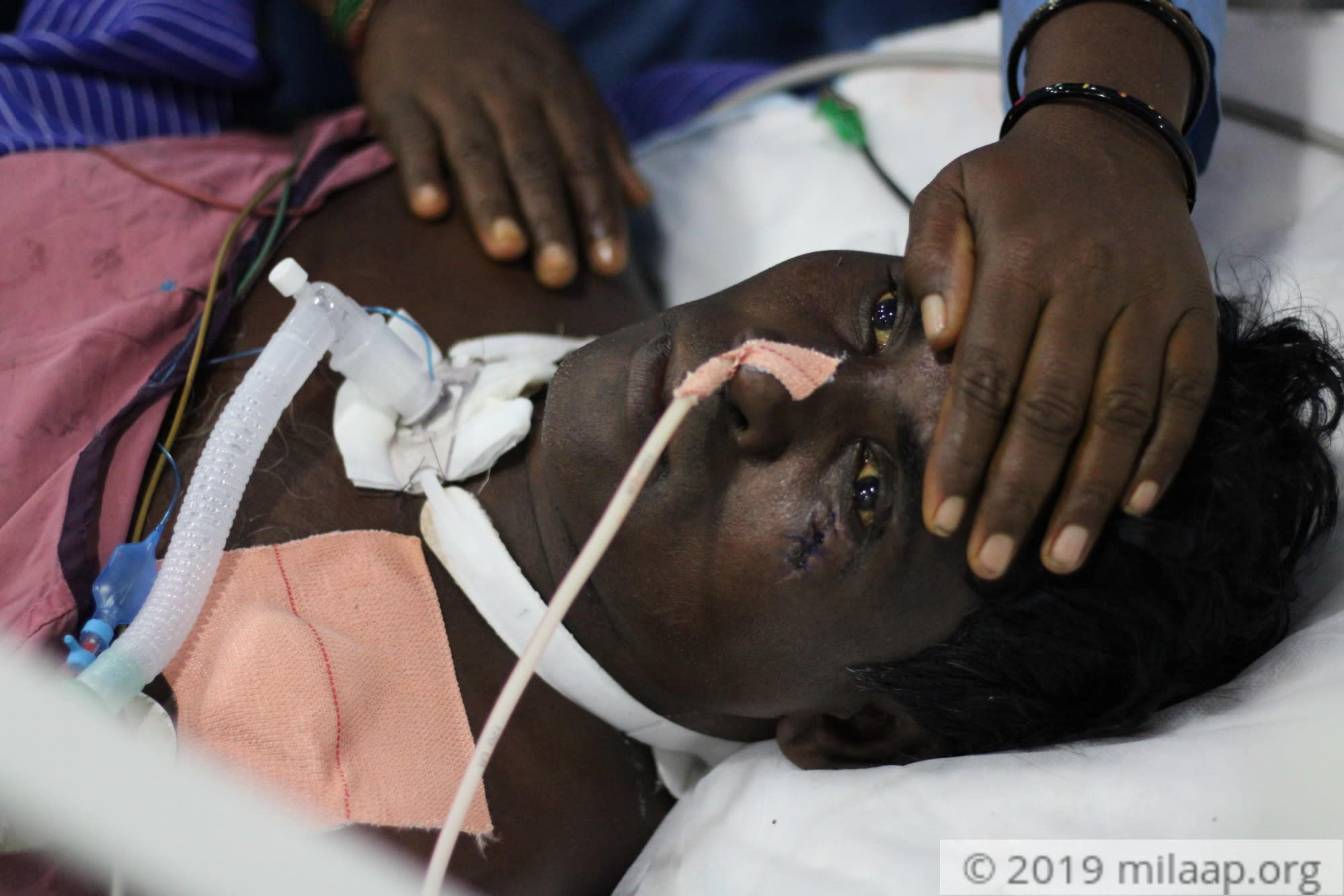 "It was raining heavily that day. My appa was lying on the road bleeding for two hours until a passerby took him to the nearby hospital. He had a severe accident…his spine and chest bones were broken. He must have been in so much pain. Now, he is fighting for his life and needs continuous treatment to stay alive. But we are running out of funds, how can we save him? Just three months since my sister passed away, I can’t lose my father too..."- Rajesh, son

She ate rat poison and died in front of his eyes

Venkatesan (42) was in so much grief for the past few months as his beloved daughter committed suicide. The 18-year-old took rat poison after a quarrel with her relatives and died on the way to the hospital. He couldn’t come to terms with the loss. All the time, he used think about her, blame himself for not being able to save his daughter. He was thinking about her even on the fateful day of the accident when the bike hit a tree. He crashed on the nearby stone, breaking his bones.

"He told me he is going to visit a friend and will come home soon. I didn’t imagine even in my dreams that my husband would be lying in a hospital with tubes and stitches the next day. I knew he was depressed. I shouldn’t have allowed him to ride. My daughter is dead and I am scared that my husband too would leave me," - Deivanai, wife.

Venkatesan was working in the quarry to feed his family of five. His 23-year-old son is struggling to find ways to pay for his father’s treatment. He works in a textile shop in his village for a monthly wage of Rs.7000. Their house was the only thing she had and they had to mortgage it to start Venkatesan's treatment and pay for his medicines.

Now they don't have a place to stay, they are sleeping on the pavement.

My father might not live if we can't get him treated

"I couldn’t save Rasathi (sister) but I want to do everything I can to save my appa. I don’t mind borrowing more money from moneylenders. I’m ready to even spend my whole life working hard to pay off the loans. All I want is to see my father alive. But no one is ready to lend me," - Rajesh

Venkatesan has suffered severe injuries to his chest and spine. He has had multiple surgeries but he is complaining of pain in his back now. He needs immediate treatment; without it, he has high chances of becoming paralyzed down his waist. He cannot speak now due to the tubes but can recognize his family. He has hope of getting better but they can't delay his treatment any further.


"Every day it costs around Rs 40,000  for medicines and treatment alone. We are managing it only with the money from pawning the house. It won’t last for another week and we need to start looking for other ways to pay for it. Why is God being tough on us? But I need to be strong…for the sake of my son and pray for a miracle,"- Deivanai, wife.

This family cannot afford to lose another member. Venkatesan is struggling to stay alive and only you can help him survive.