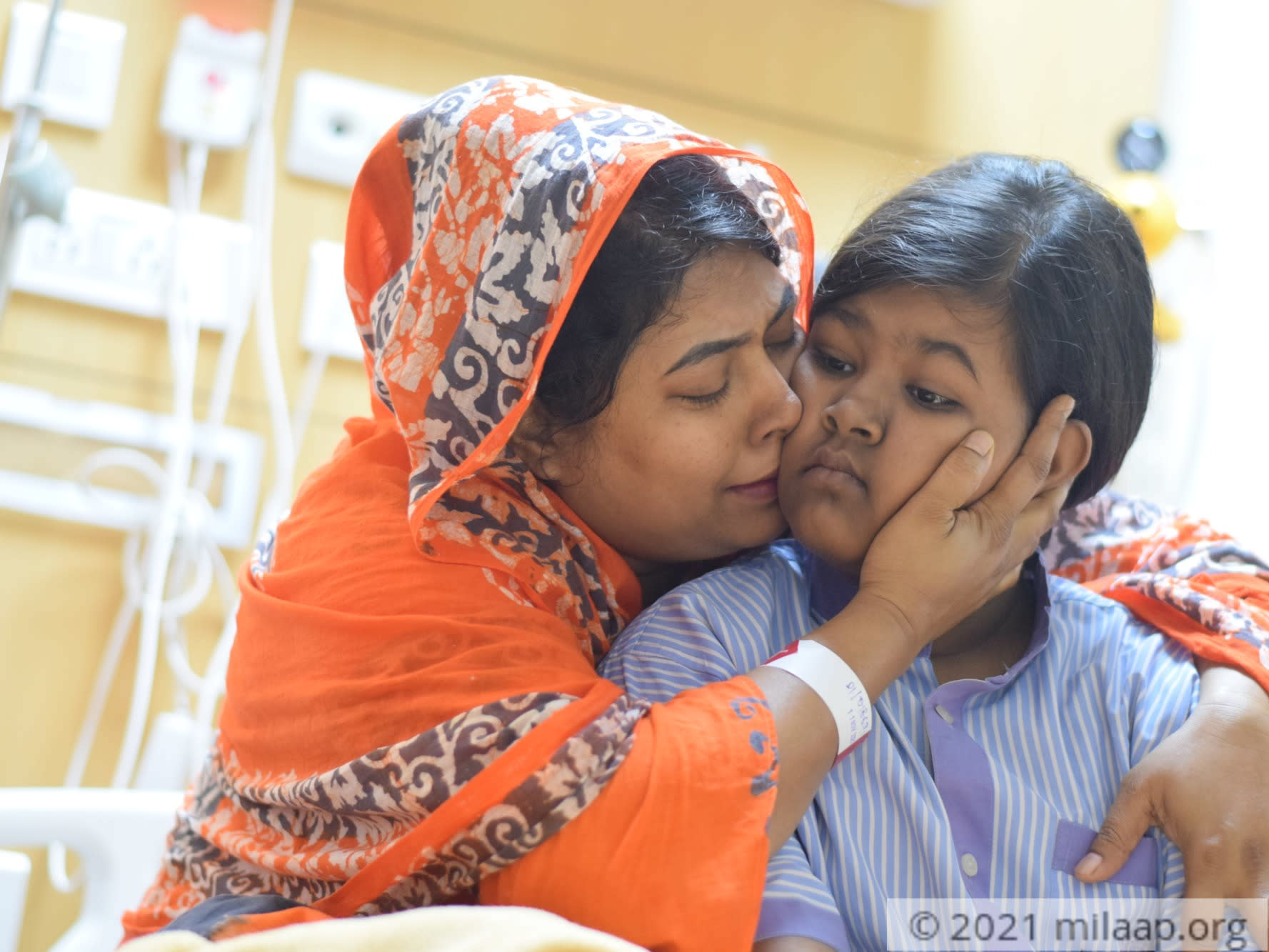 Share
“She never had a healthy phase in her life. One or the other ailment kept knocking at her door since she was a little baby and today, she is fighting for her life. This wretched disease is threatening to kill her and we are unable to protect her.”
- Shaila Sultana, mother
Shaila is 4 months pregnant and is fighting to save her 12-year-old from a severe blood disorder, all alone and far away from home. While her husband is back in their hometown, trying his best to gather as much funds as possible to save their duaghter.

Tashrin was just 1 month old when she underwent her first surgery for Duodenal atresia, a condition in which the first part of the small bowel is not developed properly. Then, when she was 3 years old, she was diagnosed with Immune Thrombocytopenic Purpura (ITP), a blood disorder characterized by a decrease in the number of platelets in the blood. Since then, Tashrin has been undergoing regular blood transfusions and fighting frequent infections.

Her bone marrow cells are unable to produce blood

“Every time we stepped out of the hospital, we prayed and hoped that this would be the last time we admit her here but it was like an endless cycle. Despite undergoing every treatment possible, her condition just wasn’t getting any better. It took us years to find out that she suffers from something more severe.” - Shaila

In August, this year, Tashrin suffered from Gastrointestinal (GI) bleeding and her blood levels dropped dangerously. She had to be admitted in the hospital for days and underwent multiple blood transfusions. They were advised to shift her to a bigger hospital in Kolkata, where they found out that she actually suffered from Aplastic Anemia, a condition that occurs when your body stops producing enough new blood cells due to bone marrow damage.

She needs a bone marrow transplant, but her parents can't afford it

Only a bone marrow transplant can save little Tashrin’s life and her younger sister is a match for the donor. However, the transplant will cost them 18 lakh rupees, an amount that these parents can never afford. Motalib works in a grocery shop in Oman and Shaila is a housewife. They had no money to even get their child the blood transfusions she needed and hence borrowed from their relatives to keep her alive. Now, they have nothing left and are in desperate need of help.

“We already have debts that we are struggling to repay. Watching our child suffer every minute is killing us and we don’t know what to do now. Tashrin is a brilliant girl but right now, she is in her most vulnerable state. She has stopped talking and stays silent all the time. She has no strength left in her body and is bound to a wheelchair." - Shaila

Only you can help this 12-year-old now. Without your help, affording the transplant is impossible for these parents. Click here to donate.
TJ
Patient Tashrin Jannat is 12 years old, living in Kolkata, West Bengal
TM
Being treated in TATA Medical Centre, Kolkata, West Bengal