Deadly Disease Has Confined This Boy To The Four Walls Of His Home, He Needs Urgent Treatment | Milaap
loans added to your basket
Total : 0
Pay Now

Deadly Disease Has Confined This Boy To The Four Walls Of His Home, He Needs Urgent Treatment

Shares
Shares
Share on whatsapp
The only time 10-year-old Shishant leaves his house is to go to the hospital to get treatment. Shishant was suffering from a blood disease and had to undergo bone marrow transplant last year, August. But he needs to be on regular medicines and constant monitoring to ensure that his transplant is a success. Shishant understands that he is sick but he is just a 10-year-old who wants to go out and play with his friends - but he is too prone to infections to do that.

Bhaskar and Dhanalaxmi’s younger son, Shishant was diagnosed with Thalassemia Major when he was just 6 months old. His body made abnormally low amount of hemoglobin (oxygen carrying protein). Since then, he has been on transfusions - he needed them every 20 days.

“But last year, somewhere around July, we noticed that even the transfusions weren’t helping him. He was getting weaker by the day and needed help even to sit up on the bed. The doctors told us that now his only hope at getting better is a bone marrow transplant,” - Bhaskar, father.

His sister saved his life once, but she can’t do that again

Shishant was lucky to have found a matched donor in his elder sister, Sanjana. Bhaskar borrowed from his family and friends and arranged for the 28 lakhs that would be required for the transplant. The transplant was done in August but since then his follow-ups and tests have continued. He needs to be under immunosuppressants - anti-rejection drugs that lower his body’s ability to reject the transplant. He needs the utmost care so that he doesn’t have infections.

“He can’t be taken off those medicines, neither can we stop his tests. But unfortunately, the costs are huge. Sanjana keeps asking me if her brother would be fine, I don’t know what to tell her. I feel helpless that I don’t have the money to continue his treatment.”

Bhaskar works in a departmental store and makes about Rs 13,000. A large part of his income has always been spent on Shishant’s treatment, medicines - he can hardly save anything. He has also been paying for his children’s education. With no other helping hand, it is getting difficult for Bhaskar to continue Shishant’s treatment. But if the treatment is stopped, the entire effort in getting Shishant a transplant will go in vain.

“My relatives have already helped me as much as they could, there is only so much they can do. But, on the other hand, my debts are piling up. I have to spend about Rs 40,000 every month, without help it would be impossible for me to save Shishant unless someone helps me to arrange 5 lakhs more.”

Bhaskar is struggling every day to afford his son's treatment, but he is still unable to arrange for the money. With your help, he can save the life of his 10-year-old. 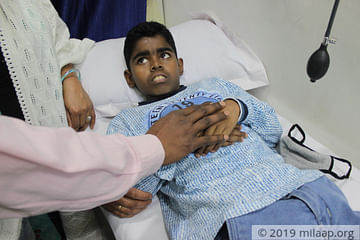 If We Can't Save Him Now, All Our Efforts Will Go In Vain

Shishant needs to undergo treatment to live a healthy life