Labourer Parents Have No Means To Afford Transplant That Can Save 7-Year-Old Son From Deadly Genetic Disorder | Milaap
Receive tax benefits by donating to this cause. 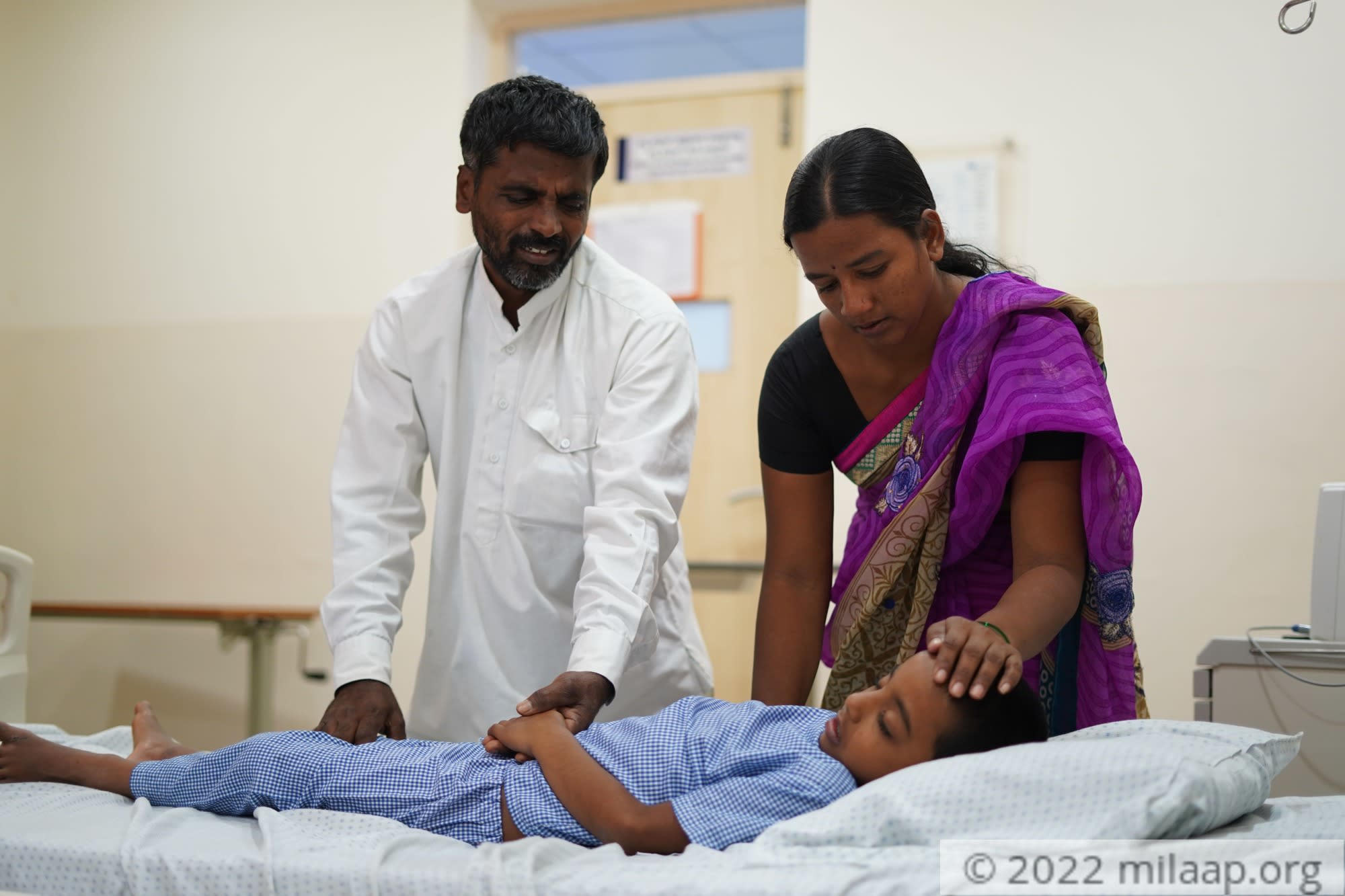 “Very silently this condition has completely destroyed Sumanth’s liver. At first it was just one lump in his liver and now they are two. The doctors have warned that should it become cancerous and spread to his bone, it will be impossible to save him. We are urgently looking for help in getting him a liver transplant before he becomes more sick.” – Bheeme Gowda, father

“We used to regularly hospitalise him till he was two years old for cough and congestion. But after that for five years he was quite healthy. We brought him to the hospital because he is not growing well enough for his age and eats very less food. We never imagined he would be so sick.” – Suvarna, Sumanth’s mother

Sumanth was born with a rare condition called Tyrosinemia. It is a rare genetic condition where the body does not break down protein properly, and in turn becomes toxic build-up in the body. The condition is fatal unless early treatment is given. The liver is the first organ that is affected by this condition. Sumanth needs an urgent liver transplant, followed by regular intake of medicines to survive.

Sumanth’s parents Bheeme Gowda and Suvarna are agricultural workers who work in fields in and around their village in Bagalkot, Karnataka and earn a daily wage income. Together, their monthly income is about Rs 4,000 because work is dependent on crop cycles. They live in a small rented house in their village, Ugalwat. They are already in heavy debt from borrowing for their's son's medical treatment and have no means to fund his life-saving transplant.

“Even if we work all our lives, we cannot pay back what we owe. Who will lend us any more money? In this situation, we had given up any hope of saving our son. It was the doctors who told us not to give up and said we could find help. Our son can still be saved if he gets treatment immediately.” – Suvarna

Sumanth’s liver is almost completely damaged and he needs a liver transplant before the damage spreads to other parts of his body and becomes cancerous. Given that he has this condition, it will be very hard to save him should that happen. His parents are racing against a very aggressive condition and trying to get him the treatment he needs before it is too late.


Sumanth’s mother is the donor and she has been asked to stop working in the farms to prepare for the transplant. His father is now the only earning member and his earnings are nowhere enough to support the transplant and the after care. They are praying that by some miracle, they can get their son the surgery he needs and save his life.

Help this 7-year-old get a surgery that will save his life. Click here to contribute.
S
Patient Sumanth is 7 years old, living in Bagalkote, Karnataka
NH
Being treated in Narayana Harudayalaya Hospitals, Bengaluru, Karnataka