Farmer Had To Use Daughter's Wedding Funds For His Son's Treatment, But He's Still Dying | Milaap
loans added to your basket
Total : 0
Pay Now

Farmer Had To Use Daughter's Wedding Funds For His Son's Treatment, But He's Still Dying 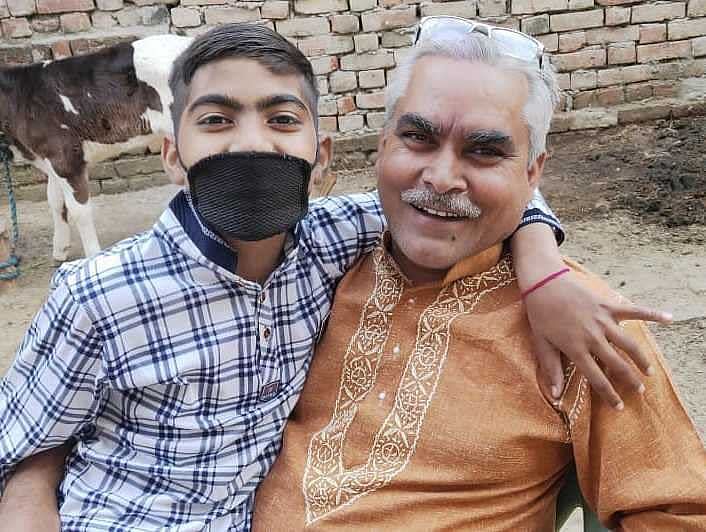 Share on facebook
"What more can I do? Ever since he first fell sick, I’ve been doing everything I can, taking him from one hospital to another, getting him whatever treatments the doctors prescribed! I’ve spent every single paise I owned.
I even used up the money I’d been saving for my older daughter’s wedding! And he’s still dying... I just don’t know what to do anymore. Am I destined to watch my son die in front of my eyes?"
— Ghanshyam, Siddharth's father
When Siddharth started having a fever last year, Ghanshyam and Pushpa had been suitably worried, and tried giving him normal fever medicine. But instead of his fever going down, his condition became worse. He became extremely dizzy all the time, and very weak.

“When I took him to our local doctors, they said his blood count was very low, but weren’t able to treat him properly. They weren’t even able to diagnose his condition! It was only after taking him to Lucknow that we came to know the truth...”

His fever revealed a life-threatening disease hiding inside him

Once Ghanshyam reached Lucknow with his sick son in his arms in June of last year, he took him to the hospital his doctor back home had recommended. Siddharth had to be admitted immediately, and was first prescribed an emergency blood transfusion, to make up for the extremely low blood count and general weakness. Further tests revealed the secret behind his sudden and critical condition.

“They said he had some blood disease which was killing him! I couldn’t believe my ears at first, because he was only a 12-year-old at the time. But the truth was unavoidable. They said blood transfusions were a temporary measure, and that he would need a bone marrow transplant to survive.”

Siddharth (right) with his dad, brother, and younger sister

They tried their best to save his life, but it’s not enough

When Ghanshyam came to know of his child’s disease, he immediately started trying to save up money for his treatment; he’d been told that bone marrow transplants could cost in tens of lakhs. This poor farmer started working twice as hard in the fields, and even sought other kinds of work in the village.

“But the pandemic this year... All the money I managed to save up got spent during the lockdown. I tried to hold onto it as long as possible, only spending enough at a time to keep my children from going to bed hungry. So a few weeks ago when Siddharth’s condition became worse than ever, and they said he needed the transplant urgently... I knew I wouldn’t be able to save my son’s life...”

Siddharth is more critical than ever, he will die in a week without your help

Doctors have told this family that their 12-year-old needs a bone marrow transplant within the next 7 days to survive. He’s already weaker than he has ever been; he can barely get out of bed, sometimes he gasps when tries to breathe, he has completely lost his appetite, and feels horrible aches and pains in his legs.

“He’s such a good boy, and so young! He hasn’t even finished his 7th standard! He became sick before he could write the finals... Knowing that my son is about to die in 7 days, watching him cry and ask when we can go home, while realizing that there’s absolutely nothing I can do about it is worse than any hell imaginable! Please, please save my son’s life!”

You're their only hope now, you can help my clicking here and donating. 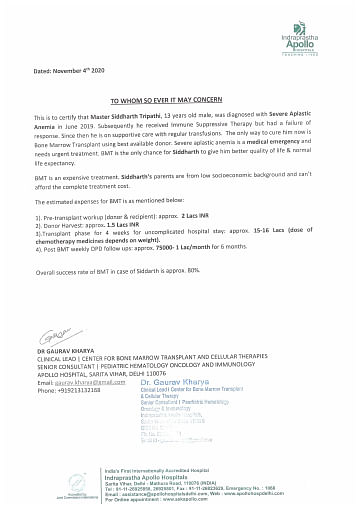 Donated to this campaign via Bank transfer/QR Code? Click here if you can’t find your donation listed below.
sk
surendra donated Rs.11,000