First Cancer and Now Blood Clot In The Brain Has Left This 6-Year-Old Yoga Enthusiast Unconscious | Milaap
Receive tax benefits by donating to this cause. 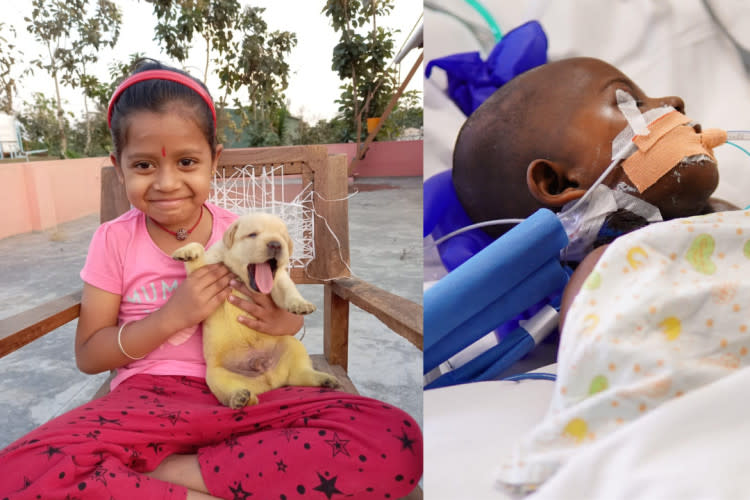 Shamretha has always been described as active and outgoing in school. She has consistently been a class topper and a yoga enthusiast – and so, nobody really knew that she suffered from a rare blood disorder called thalassemia major that disrupted her life once in a month.

Thalassemia is caused by the underproduction of hemoglobin in the body, and Shamretha has been able to live with it only because of monthly blood transfusions. But she had to undergo a bone marrow transplant recently as her doctors advised her parents, Chandrabose and Rathi, that it would be a permanent cure for her condition.

“We were hoping that this procedure would cure her forever, so that she would not need to endure the pain of needles every month. She was confident about getting cured as well. Shortly after the surgery, she developed a clot in her brain. That has put her life and ours on hold.” - Chandrabose, father.

‘The last time I heard her voice was 15 days ago’

After the little girl developed the clot in her brain, other organs in her body started getting affected too – her kidneys were damaged, her heart endured stress and her body was shutting down. She underwent dialysis for her kidney issue, but other problems remain. Currently, she is unconscious and bedridden, critical in the ICU.

“The last time I heard her voice was when she was being wheeled into the ICU for the transplant. She told me she will come back soon. But she has not. She has not even opened her eyes. We keep waiting for signs of recovery, but none have come so far.” - Rathi, mother, in tears.

Without continued treatment, they may lose their only child

Shamretha is Chandrabose and Rathi’s only child. They had taken great care to raise her, knowing she was unlike other normal children in terms of health. They had given her all the love in the world and protected her till this point. But now, they feel that things are slowly getting out of hand as they could lose her due to a lack of funds to continue her treatment.

“I am a painter and the only earning member of my family. All my life I had been saving up money for my daughter’s transplant thinking that would be the end of her problems. But now, life has thrown us in another difficult situation. Please help us.” – Chandrabose.

Shamretha needs continued ICU care to survive, but her parents cannot afford it. Click here to save her before it is too late.
SC
Patient Shamretha C is 6 years old, living in Coimbatore, Tamil Nadu
AC
Being treated in Apollo Cancer Institutes, Chennai, Tamil Nadu