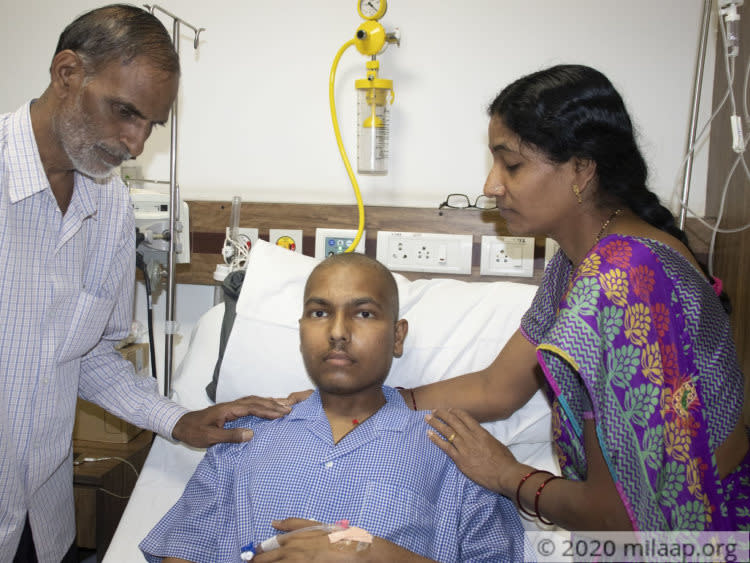 Share
“Baba, you don’t have to worry anymore. Just a few more years and I will be an engineer, I will have a good job and you and Aai (mother) won’t have to toil in the field in the scorching summer heat. I will take care of you and of Munni’s education too.”
Pranay (20) thinks about all these promises that he had made to his parents only months ago. Everything seems like a dream to him now. Now his only reality is fighting a dangerous cancer in a hospital in Nagpur. He needs continued treatment but his father, a farmer, doesn’t have the means to afford it.

After a week in the hospital, Pranay’s family got the shock of their life

Last December, when Pranay had come home from college, he was feeling weak. Soon the weakness turned into a fever that wasn’t going away. Pranay’s father, Sanjay, took him to the hospital without having any idea that they would admit his son.

“They did so many tests and then I finally found out that my son is suffering from blood cancer. I couldn’t believe what I heard, how was this even possible? It was just a fever…,” - Sanjay, father.

Heartbroken yet determined to save his son, Sanjay borrowed as much as he could from his relatives. He ensured that his son’s treatment was not delayed.

Pranay has completed 2 rounds of his chemotherapy and he is improving. But the doctors have told Sanjay that this is a crucial juncture and they can’t stop his treatment. The poor father is in a dilemma - he is happy as well as sad at the same time.

“I was so happy to know that Pranay was recovering. He could go back to his college and his dreams - once he completed his treatment. But just the thought of continuing his treatment made me panic. I have already spent 12 lakhs, we need 8 more lakhs. How will a poor farmer like me arrange for so much?” - Sanjay, father.

Sanjay and his wife, Karuna, are farmers in a small village near Nagpur, Maharashtra. Erratic rainfall and low soil quality has never given them good produce. Yet they kept working hard, struggling every day to bring food on the table for the children. These parents have skipped meals to feed their children and to give them a good education. They were never prepared for an emergency where they would need lakhs of rupees to save their son’s life.

“He is ready to fight this disease, he is positive that he will win this fight but what if we fail in arranging the money! This thought keeps me awake at night. My son doesn’t have much time left, we need your help, please…,” - Sanjay.

Your help can save this 20-year-old's life — every small contribution will go a long way in this direction
P
Patient Pranay is 20 years old, living in Nagpur, Maharashtra
HN
Being treated in HCG NCHRI Cancer Centre, Nagpur, Maharashtra