2-Year-Old’s Father Abandoned Him, Now His Mother Struggles To Save Him From Heart Disease | Milaap
loans added to your basket
Total : 0
Pay Now

2-Year-Old’s Father Abandoned Him, Now His Mother Struggles To Save Him From Heart Disease

“Just after a year Arham was born, my husband and I got separated. To make things worse, he hasn’t kept in touch with my son, forget helping us financially. He doesn’t know that Arham is suffering from heart disease and the only way he can get better is through a surgery. My father and I are struggling everyday to afford his treatment but it is well beyond means. It is because of my son that I have been braving every situation - without him, my life would be meaningless,” - Tania, mother.

A healthy baby at birth, Tania didn’t know that his son was born with a hole in his heart

2-year-old Arham has ventricular septal defect - a congenital heart defect due to which there is a hole that abnormally connects the lower chambers of his heart. Sometimes such holes close on their own but in case of poor Arham, it didn’t. He has been on medication since he was 3 months. But nothing could better his condition.

“The doctors in Dhaka told us to take Arham to India when he was 1 year old. He needed the surgery even then but he was underweight - so we had to wait. Now he is very critical - he needs the surgery as soon as possible.”

Every 15 days, little Arham gets fevers

“Hospital visits have become a regular thing for my son. While other kids his age are going to playschools, Arham has to pay a visit to the doctor in every 15 days. He has fevers and frequent cough and cold. He has lost appetite and hardly eats anything these days. He is of the correct weight now and the surgery is his only hope - but there is no way we can arrange for so much money.”

Arham with his mother and grandfather

Tania’s father, Kamal Hossain runs a small grocery store in Mirpur, Dhaka. He makes around Rs 12,000 a month and is the sole earning member of his family. Kamal’s health is failing and he is having a  tough time arranging 2 lakhs for his grandson's treatment.


“But I have not lost hope. I have sold my wife’s jewelry and borrowed from my relatives. Now, the only way I can arrange for Arham’s surgery is through crowdfunding. Please help me save him,” - Kamal Hossain, grandfather.

Tania and her old father are struggling to save little Arham from a failing heart. The only way they can do this is if you come forward and extend a helping hand to them. 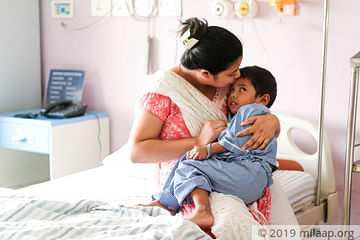 Every 15 Days Arham Needs To Visit The Doctor

Arham has a hole in his heart, he needs an urgent surgery to live

UPI: givetomohammadashiqur1@yesbankltd (Copy to clipboard)
Or
Click here to read the instructions before you make a bank transfer.