It Has Been Weeks Since This 3-Month-Old Opened Her Eyes | Milaap
loans added to your basket
Total : 0
Pay Now 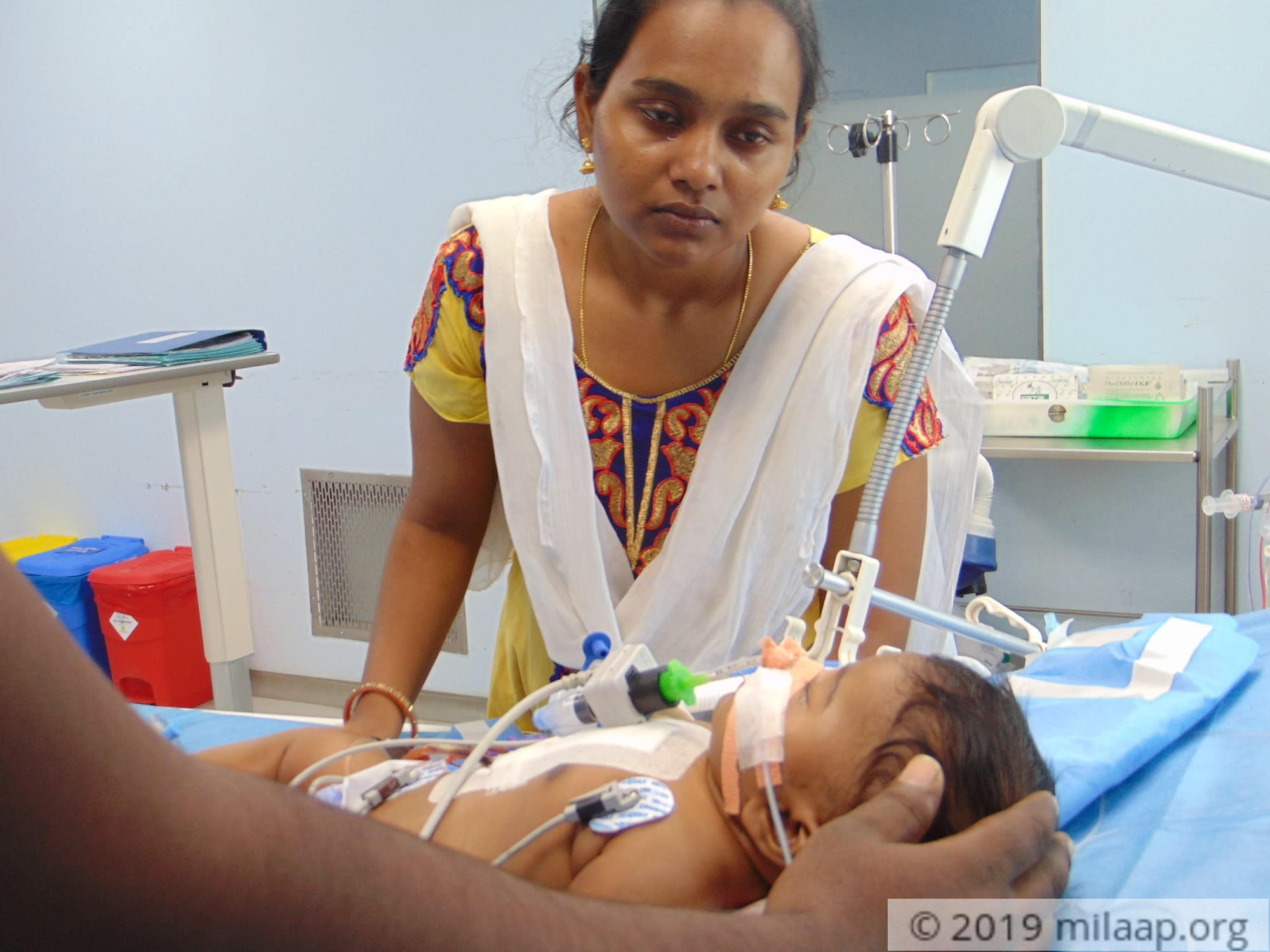 “All I see when I step into the ICU is a small bundle curled up on that big bed. That’s my daughter now – unconscious and lost amongst those wires and tubes.”  - Nagapriya, mother.

At 3 months, Manvitha has already suffered enough for a lifetime

Her chest has fresh stitches from her recent heart surgeries. Just below, there are two holes in her abdomen with tubes inserted to her heart to drain the impure blood. Her neck has a tube pinned to it. There are tubes and needles pinned to her little hands, legs and thighs, with multiple injections going in through each. One of her nostrils has a tube connecting to the ventilator to aid her breathing. The other nostril has a feeding tube. Her lovely little face is swollen, yet lost under all these tubes. Her parents grieve as they see tiny spots all over her body, where the needles were once.

“I can see the rise and fall of her chest. That’s the only way I can tell we still have her!” – Ajay, father

When Manvitha turned a month old, she had a case of severe cold and cough. The doctors suggested a scan and found out she had a hole in her heart. There was no circulation of blood to the right lung and she needed three surgeries to get her heart and lungs to function normally. However, they decided her surgery could wait till she developed further. She was to have the surgeries when she was 6 months old.

But at 3 months, her body turned blue and her lungs began to give up

“She was doing okay and we had begun to relax. But at three months, she caught a severe cold. She was very irritable and kept crying. There was no more running around and she just kept sleeping throughout. Even when asleep, she would call out to me if I tried to move away. I began to worry and then one day, she cried all day. Her body turned a deep blue and I was so afraid. We rushed her to the hospital that very night and they said her lungs were badly infected – beyond repair!” – Nagapriya.

The doctors said there was no hope of saving her

Following her admission on 26th September, she was rushed to the ICU and was put on ventilator support. At 8 am the next morning, she had her first surgery. She was still recovering from her surgery when her oxygen levels dropped too low that very night.

“It was 12 in the night when the monitor read her condition was getting worse. Even in her sedation, she clasped my fingers tightly when I called out her name. I thought that was it. When the doctors said she needed another surgery immediately but that there was no hope, I was devastated. My head started spinning. I did not want to leave the ICU. What if I could not see her again?” – Nagapriya.

"After her surgery, her father broke down. When she heard him, she sighed, as if to say she was relieved we were by her side!"

It has been weeks since she has opened her eyes

The second surgery was successful, much to her parents’ relief. However, it has been weeks since she was last conscious. She’s still on ventilator support and intense medication.

“She is struggling to breathe on her own. Although the surgeries went well, she’s still not out of danger. She is under all those tubes and it has been weeks since she last saw us. I dread going into the ICU. I can’t see her like this. It kills me. I was so upset when she had to even get her vaccinations because needles were involved. But, look at her now. Every inch of her skin has seen needles!” – Ajay, father.

"My husband suffered from neurotic depression for years and is only now recovering. But seeing her like this, the symptoms are cropping up, again. I am scared for him!" - Nagapriya

In order to survive, Manvitha needs PICU care for a week more

Right now, baby Manvitha has multiple injections going in through the many tubes on her body. To prevent clotting, she needs Heparin. To reduce the swelling caused by the medication, she needs three injections a day, amongst other medication. She requires a week more of the PICU care, in order to survive. The expenses amount to 7.7 lakhs and the parents are struggling to gather funds.


“Manvitha was born after 5 years of our marriage. She saved me when I was so close to giving up on life. But now, I am afraid I won't be able to save her when she needs me to. I’m  a carpenter and earn Rs 12,000 a month, if there’s work on all days. It's been a month since I've gone for work and there's no source of income. We've borrowed from everyone we know. Now there's no way forward. I know I can't lose her. But I don't know how I am going to save her." - Ajay.

Little Manvitha has already struggled enough for a lifetime. Your generous contribution can help her parents save their only daughter.