Abandoned by her husband, Single Mother Struggles To Save Luv's Massive Facial Tumour which Could Soon Blind Him | Milaap
Receive tax benefits by donating to this cause.

Abandoned by her husband, Single Mother Struggles To Save Luv's Massive Facial Tumour which Could Soon Blind Him 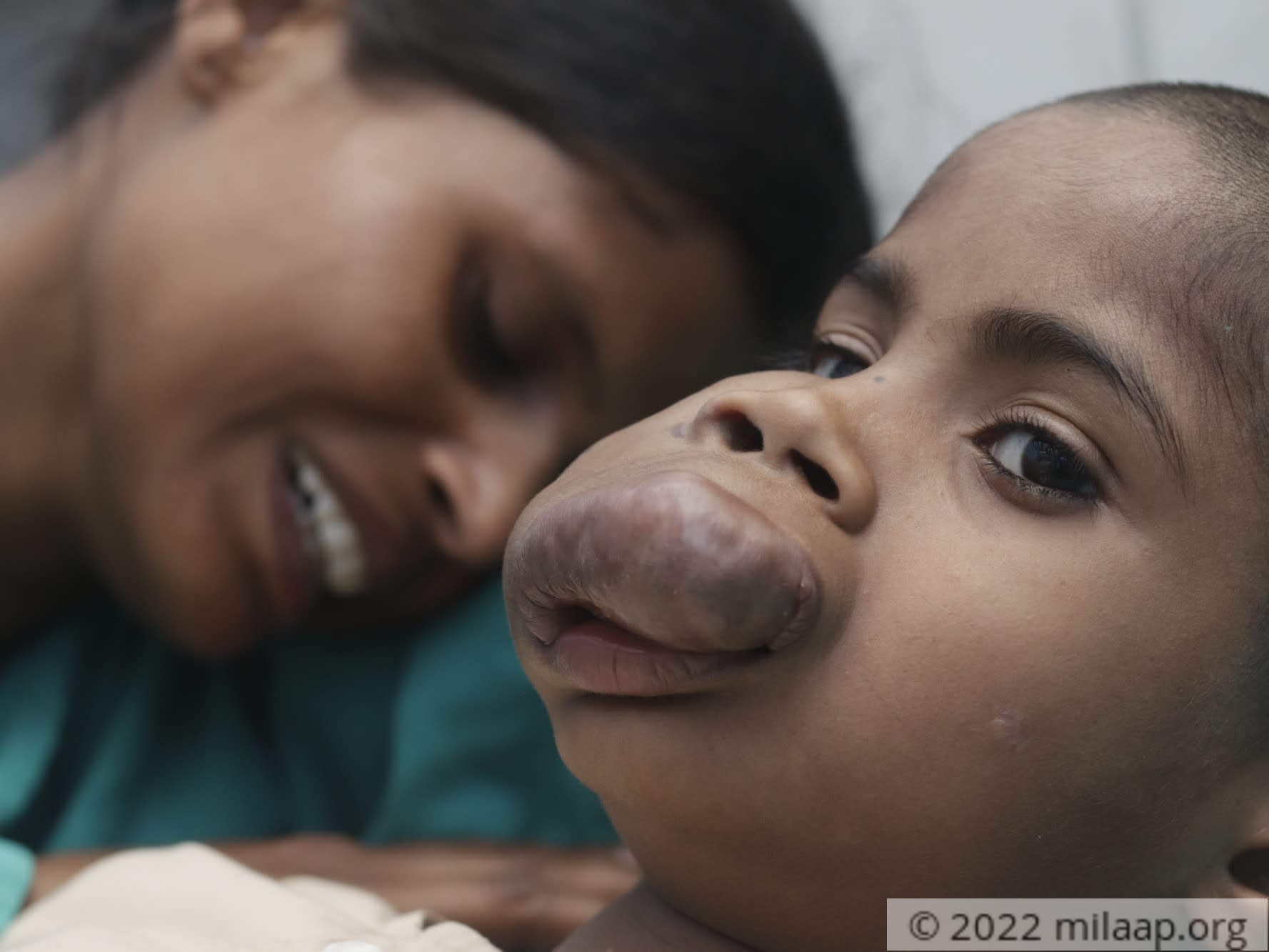 "The doctor told me that if his facial tumour isn't operated on urgently, it will grow so big that it will end up covering my son's eyes, nose and entire face. From a small pimple at birth, it has grown so much that my son can't eat or speak at all now. If I delay the surgery anymore then he won't even be able to breathe and will turn blind. The past 7 years have been incredibly tough on my son who has not only been ridiculed by others, but also disowned by his father." - Sumitra, mother

If left untreated, this rapidly growing facial tumor can blind this little boy

7 years ago when Luv was born, the mere sight of his face was enough for people to consider him a bad omen. Luv had a pimple-like outgrowth on his face, and at that time, neither of his parents had been knowledgeable enough to know that it would turn out to be a deadly tumour that will disfigure his appearance. If left untreated, it will envelope his entire face and impair his vision too. Little Luv needs an oral maxillofacial surgery along with medication and plastic surgery.

"I have skipped meals just to save every penny for my son's surgery. Sparing no effort for 5 years, I saved 20,000 rupees and happily went to the city hospital, thinking now my son could undergo surgery and nobody would dare tease him anymore. But there, they asked me to deposit INR 45 lakhs and I was scared out of my wits. That huge denomination was echoing inside my head. I felt as as if someone had pierced my heart with a dagger.” - Sumitra, mother

Abandoned by her husband, this single mother now struggles to save her son

The biggest blow that came Sumitra’s way, was when one fine day, her husband started hitting and hurling abuses at her for giving birth to Luv and their 4 daughters. He stormed off and hasn't returned for 2 years now, leaving Sumitra and her kids to fend for themselves.

"None of the villagers were ready to believe that his face could look normal again with a surgery, and cut all ties with us. I tried to register him at a school, but the other kids bullied my son and chased him out of the classroom. I was ready to face that too but what broke my heart the most was when my husband abandoned us and cursed me by calling my children disgraceful. Since then, I've been struggling to single-handedly raise all my children by doing any labour work I get, be it as a domestic help or in the fields." - Sumitra, Mother

Ridiculed for his tumour since birth, Luv just wants a chance to be treated normally

For a 7-year-old child to be shamed constantly by every person he has encountered, has left a deep traumatic wound in Luv's mind. Now, with his tumor rapidly growing in size, his condition is deteriorating. The tumor has completely claimed his lips, jaw and the lower part of his face, and since then, this poor kid hasn't been able to eat or drink anything. He has lost a lot of weight drastically, and now is unable to utter words too. He blames himself for his mom's suffering and the reason his father left her and his sisters.


The only way Luv can live a normal life is with this oral surgery. It is beyond Sumitra's means to afford, but with a little help from you, Luv will be well on his way to recovery. Click here to help 7-year old Luv get a surgery for his face tumour.
L
Patient Luv is 7 years old, living in Mathura, Uttar Pradesh
SM
Being treated in Swastik Multi Specialty Hospital, New Delhi, Delhi