The Large Scar On Her Head Tells The Story Of Her Pain, Her Battle For Life Isn’t Over Yet | Milaap
loans added to your basket
Total : 0
Pay Now

You are sending a message to
Ravi Kumar Israni
Go back

The Large Scar On Her Head Tells The Story Of Her Pain, Her Battle For Life Isn’t Over Yet

Share on facebook
You can’t miss the scar on 12-year-old Janvi's shaven head. It’s a constant reminder to her parents of the struggle she has been through, and the excruciating pain she is in even now. It’s also a constant reminder to them that if they can’t afford to continue Janvi’s treatment, they will lose her to a deadly disease.

“Look at what this disease has done to her - she is no longer my happy little Janvi. She looks so different. I can’t stop my tears when I see her. Will she ever be the same again?” - Ravi Kumar, father of 12-year-old Janvi.

The bone marrow transplant was supposed to cure her…

Janvi was suffering from Thalassemia since she was just 4-months-old. A common cold and fever soon looked life-threatening for Ravi and Raveena’s daughter. She turned pale. A series of tests later, the parents found out that Janvi’s body doesn’t produce enough blood. Since then she has been going for regular blood transfusions.

“But even those stopped working after a time. The doctors kept telling us that the only thing that can save her now is a bone marrow transplant. I started arranging for funds. The sum was huge but after a lot of struggle I finally managed to afford her transplant.”

It took place in the month of June. Janvi went home after a few weeks - she was showing signs of getting better. She was discharged, the transplant seemed like a success.

Only 2 months later, on the night of 11th August, Ravi and Raveena rushed to Janvi’s room hearing her loud screams.

“She was holding her head and crying out. She had a terrible headache -she was almost shaking. We immediately rushed to the hospital. They said her blood pressure had shot through the roof, she had bleeding in her brain. The very next day she had a surgery; that’s the scar you see…” - Raveena, mother.

Since then her condition is getting critical with every passing minute. High fever, no appetite and severe weakness - Janvi hasn’t even been able to get up from her bed.

All she wants is to go home, is that too much to ask for?

Janvi is just 12 and for almost all her life she has been battling a severe blood disease. The last bone marrow transplant was not a success but the doctors have said that once her infection is under control, she would need another one.

“We are all pinning our hopes on this treatment but when the doctor told us the cost, I knew this was not something I can afford. I need your help, you’re the hope I have now. Please save my daughter,” - begs Ravi.

Ravi used to work in a private company in Ahmedabad but for the last four months, he hasn’t been able to go to work. He has always been by Janvi’s side, doing everything possible to make her feel better.
Ravi, Raveena and their 6-year-old daughter, Didya have been living far away from home - praying every minute for Janvi’s fast recovery. Your generous contribution will bring back their happiness. 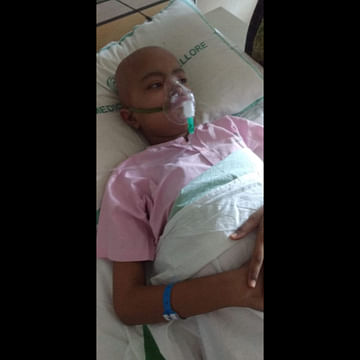 Get well soon may God bless you.

Donated to this campaign via Paytm? Click here if you can’t find your donation listed below.
Va
Vinita donated $200

Get well soon may God bless you.

You will be fine 😊

god bless you child be strong, you have been given a second chance all will be well, all this will make you the person you are meant to be god bless