Little Harsh Can No Longer Recognize His Parents, This Infection Is Slowly Destroying His Brain | Milaap

Little Harsh Can No Longer Recognize His Parents, This Infection Is Slowly Destroying His Brain 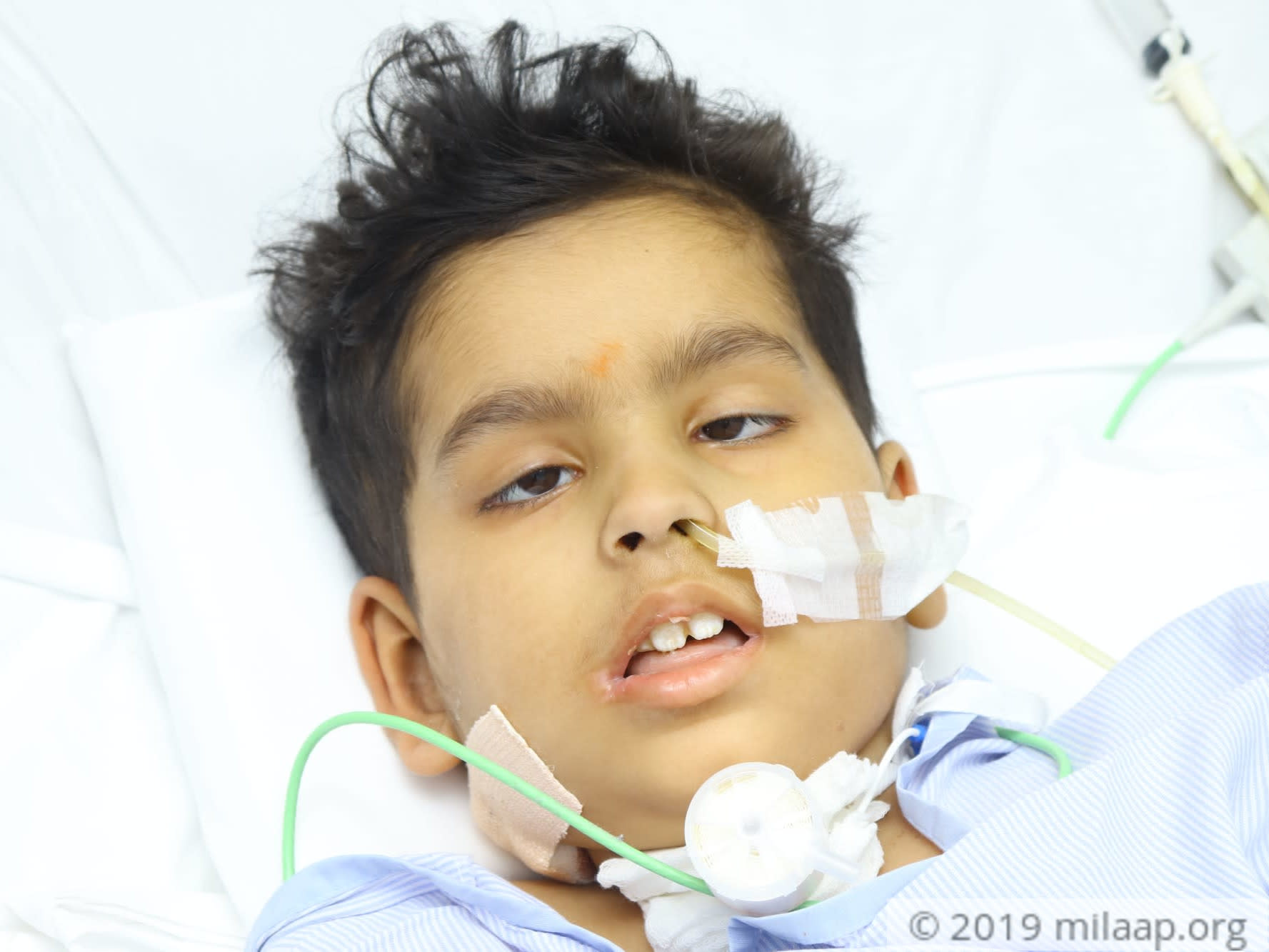 Share
My son was unconscious for 18 days. I can’t even explain what that feels like as a mother. I used to sleep on a chair beside his bed every night, and when I woke up he would still be unconscious. After 18 days, one morning, when I opened my eyes, he was awake and looking at me.
Overjoyed, I immediately reached for his hand but… he pulled away. And then he asked…
“Where is my mom?”
My heart broke that day. It had finally happened. He had forgotten who I was.
– Nilu, mother

Harsh was 5 when he was diagnosed with brain cancer

It had been difficult for Nilu to raise little Harsh and his elder sister all alone while her husband was posted on the other side of the country as a soldier. But she still managed, and never left her children wanting for anything. She was not ready though, when things took a sudden and unexpected turn a few weeks after Harsh’s 5th birthday. He started getting severe headaches and frequent bouts of vomiting. When she took him to the doctor, her 5-year-old was diagnosed of brain cancer.

They treated him as soon as possible, but it was temporary...

“We couldn’t believe it at first, when the doctors told us; he was just 5 years old. But we forced ourselves to get over our shock, and started his chemotherapy and radiation therapy immediately. It took a year and a half and about 30 lakhs, but finally he was cured. Or so we thought, until a few months ago, when he started showing the same symptoms; severe headaches and vomiting. His cancer relapsed.”– Nilu

Little Harsh was almost in a coma by the time his mother got him to a doctor. He was diagnosed as having developed viral encephalitis; an infection of the brain. It was so severe that the doctors told the distressed mother to prepare for the worst. Medicines were able to slow the progress, but Harsh’s condition kept deteriorating. He started having memory lapses and frequent confusion, as the infection damaged more and more of his brain. Now, he can’t recognize his own parents.

Sanjay is trying his best to protect his son, while also protecting our country

“My name is Sanjay Kumar. I’m a sipahi in the Border Security Force, stationed in Kashmir. I want to be by my son’s side, but I can’t leave my post nor quit my job. Where will I get money if I do? For his cancer, after I spent all my savings, I had to take so many loans. And when that wasn’t enough my comrades pooled their own hard-earned money until I was able to afford his chemo and radiation. Now he needs another 15 lakhs! What will I do?!”
– Sanjay, breaking down over the phone

A father crying at our country’s border, a mother crying in an ICU, and a son who recognizes neither of them

These parents are desperate not to lose their little one, but they have nothing left to save him with. Only you can help. Please contribute as much as you can, and help little Harsh remember his parents.
HV
Patient Harsh Vardhan Chaudhary is 8 years old, living in New Delhi, Delhi
SG
Being treated by Dr Anupam Sachdeva in Sir Ganga Ram Hospital, New Delhi, Delhi