A Rare Blood Disorder Has Put This 9-Year-Old's Life At Stake, He Needs Urgent Transplant | Milaap

A Rare Blood Disorder Has Put This 9-Year-Old's Life At Stake, He Needs Urgent Transplant 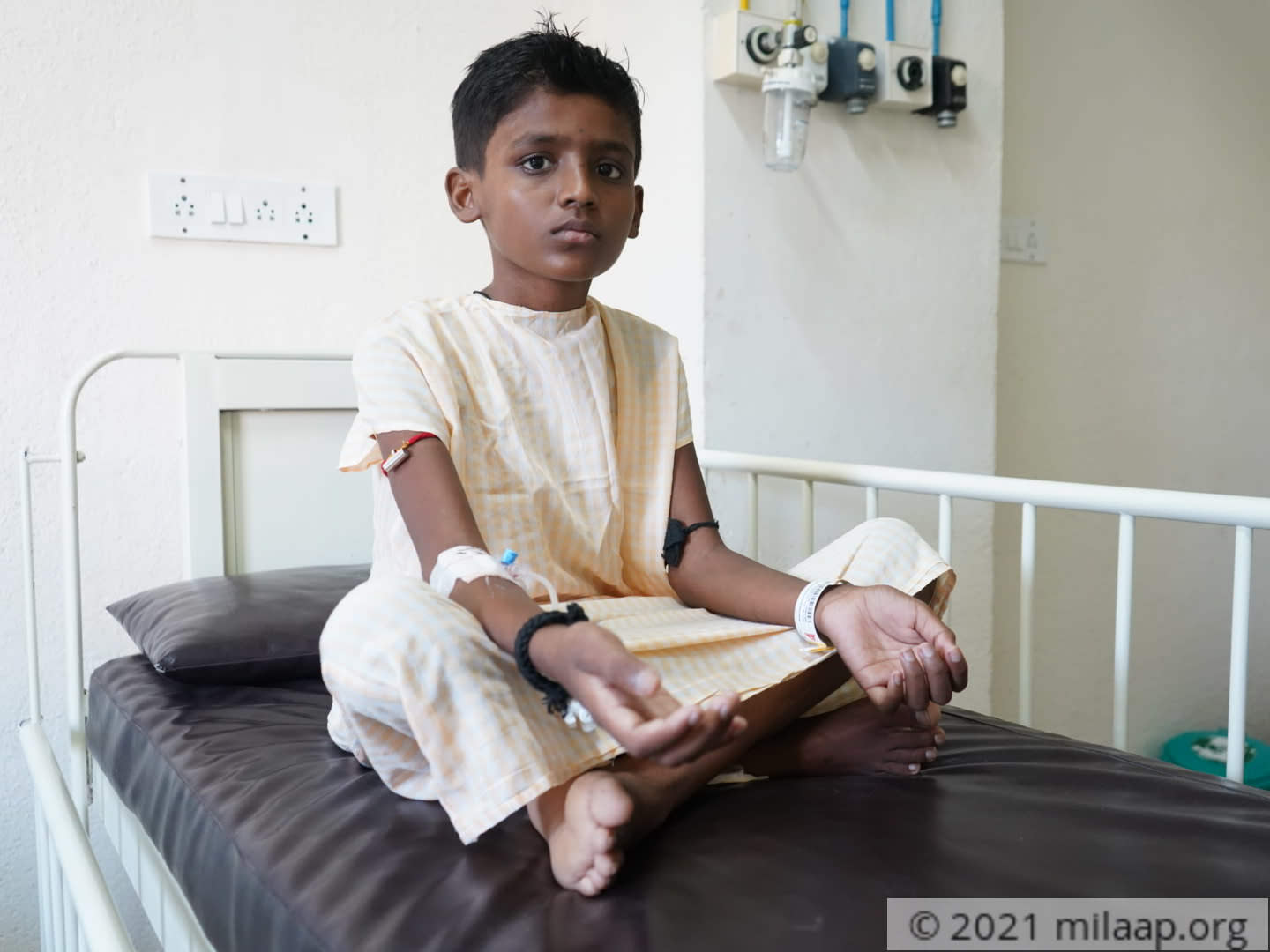 Share
“Every day is a struggle to survive for my son. This is not at all what I imagined his life to be. For the last 3 months, I have been running from one hospital to another to keep my son alive. Right now, I don't even earn the few hundred rupees that I used to. I have absolutely no savings left nor do I have any property that I could sell. Every rupee is so important to us that we have stopped eating proper meals, resorting to atisfying our hunger with just biscuits and water. But it isn’t enough and I don’t know how to save him”
- Pintu, father

He needs blood transfusion every 4 days

9-year-old Gowtham suddenly suffered from a recurrent fever, which refused to subside despite medicines and treatment. He has never been admitted in a hospital his whole life, but when he was hospitalized for straight 7 days with his platelets count falling to dangerous levels, his parents got very scared. Then the doctors told them that their child suffers from a life-threatening disease, and they just couldn’t believe it.

“Ever since his birth, he never once was admitted for anything at a hospital. And now, he is forced to get a blood transfusion, every 4 days, to survive. With no symptoms at all, how can my child suddenly have such a dangerous condition? I still can’t believe it.” - Keso Devi

A disorder that can aggressively kill this little boy

Gowtham suffers from Severe Aplastic Anemia, a condition in which the body stops producing enough new blood cells, leading to dangerously low blood levels that can aggressively kill a person. In Gowtham’s case, only a transplant can save his life.

“He wasn’t like this before. He used to be such an active child, full of life. But this disease has left my son bedridden. He can barely stand nor can he walk. He has to be carried around, and often cries because of body aches and bleeding gums... This disease is slowly killing him!” - Pintu

He needs a bone marrow transplant to survive

Without a bone marrow transplant, Gowtham will not make it. But his poor father is unable to afford the treatment. Pintu is a daily wage labourer and with the limited income that he has, it is impossible for him to afford his son's life-saving transplant. He needs your help.

“He is our only child and I can't even protect him. I am failing as a father..." - Pintu

You are this father’s last hope. Please help him save his dear son, Gowtham. Your generous contribution can give this young child a second chance at life. Click here to contribute.
GK
Patient Goutham Kumar is 10 years old, living in Muthukadu, Tamil Nadu
SR
Being treated in Sri ramachandra Hospital, Chennai, Tamil Nadu