The Disease Stole Diva's Childhood...Now It's Killing Him | Milaap

The Disease Stole Diva's Childhood...Now It's Killing Him 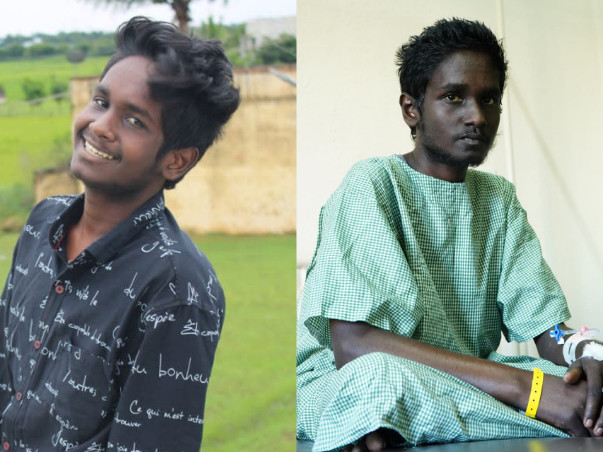 Share
17-year-old Diva has not had a happy childhood. His early years were spent in and out of the hospital, dealing with bouts of vomiting, fever, constant headaches, and dizziness. His helplessness to understand his ailment hampered his ability to study; he remembers trying his best, but still failing his class 10 exams. Devastated, he refused to continue studying. Only later was he correctly diagnosed with Fanconi Anemia - a deadly blood disorder. Today, he’s in the jaws of death, and needs your help to survive!
With your help, he can start over and this time, chase his dreams!

As a baby, Diva suffered from vomiting and diarrhea and was always drowsy. Being uneducated, his parents struggled to understand what was going on.

“We’d take him to the doctor and they’d give medicines; it would get better for a while…only for the cycle to start all over again. When he was 10, he fainted and was diagnosed with Typhoid and rushed to a bigger hospital. Nobody told us what was happening! Even if they did, we wouldn’t understand...” – Pachhaiammaal, mother.

The deadly disease that pushed him to quit school forever

“He barely had any blood left in him. He would need a plasma transfusion every time his symptoms came back. We were relieved we had a solution…but it was only beginning! Time passed by and he couldn’t walk or talk for long periods. He’d faint on his way to school, and come back home. When he failed his class 10 exams, he couldn’t cope. He blamed himself and quit school…” – Murugan, father, sobs.

Tests were run, and he was diagnosed with Fanconi anemia - a disease of the bone marrow.

He was also diagnosed with multi-organ dysfunction

Tests revealed a lump in his chest was the reason he couldn’t walk. He was treated for it immediately. Just as he was recovering from it, he was diagnosed with multi-organ dysfunction.

“He struggled to breathe all of a sudden, and was rushed to the ICU. His heart was weak. His kidneys were failing! His vital organs were all infected…we didn’t know what to do. We thought we'd never see him again! But after weeks in the ICU, he’s slowly showing progress. With prolonged treatment, he can survive…he can recover from his miserable life…” – Pachhaiammaal.

“I lift sacks of cement for a living…how can I afford 12 lakhs?” – father

Murugan is a daily-wage laborer and has been badly affected by the pandemic. In the past year, he has rarely worked. His wife works as a maid in local houses. Together, they earn no more than 8,000 rupees a month. At a time when they’re barely surviving, they can’t even dream of affording 12 lakh rupees for Diva's treatment.

“Yet, we’ve spent over 2 lakhs in the last month, and are neck deep in debt. I don’t know how we managed that. All I do know is that I have nobody left to even borrow money from anymore! My son has spent all his life in pain and misery…he deserves a better life. Please help!” – Murugan.

This boy has suffered all his life. With a little help from you, he can start over again. Click here to save him.
D
Patient Diva is 17 years old, living in Thiruvallur, Tamil Nadu
SR
Being treated in Sri ramachandra Hospital, Chennai, Tamil Nadu