Their 5-Month-Old Is Struggling To Breathe On His Own, Only Urgent Treatment Can Save Him | Milaap

Their 5-Month-Old Is Struggling To Breathe On His Own, Only Urgent Treatment Can Save Him 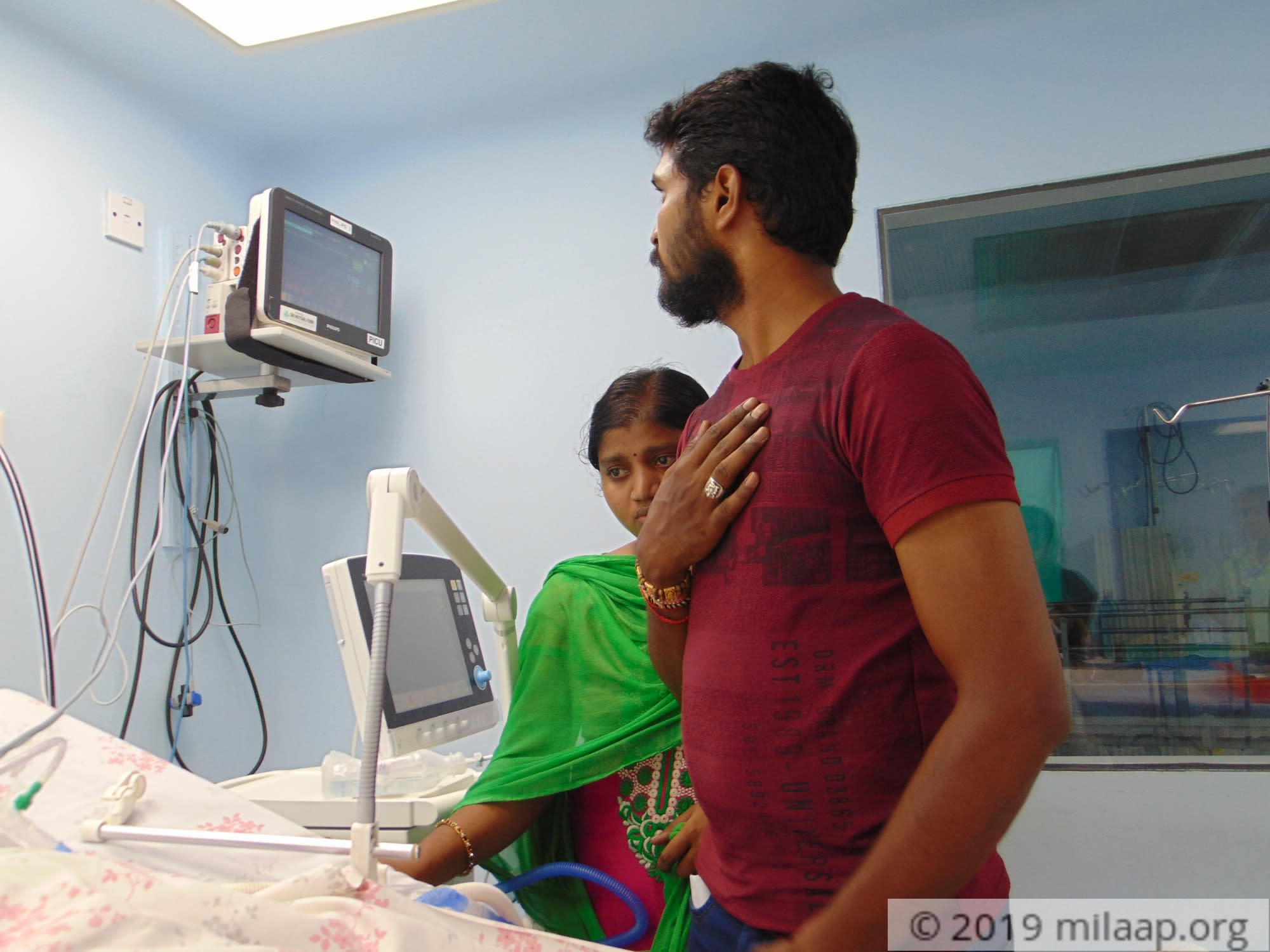 “He was born with complications. But even those don’t hurt us as much as it does when people refer to our son as a Down’s baby. Isn’t it enough that’s he’s struggling to even breathe now? He should live. I want to raise him so his identity becomes more than just his genetic disorder. “– Ramesh kumar, father.

All through her pregnancy, Vijay Priya took great care of her health. The couple was expecting their second child and their happiness was beyond measure. Every scan was in their favour and the doctors said the child had no complications. However, when the baby was born, the parents were in for a shock. On the third day, the Echo test revealed that the baby had holes in his heart and needed an open-heart surgery to lead a normal life. While they said that the surgery could wait till the baby turned 3 years, there were other complications that couldn’t. He was also diagnosed with Down Syndrome.

“Imagine how we would feel. We took every scan. We were told he was absolutely fine. But when he was born, one after the other, the diseases came right after. The list was endless. It got to a level where we were told the baby won’t survive. We were fed-up and hopeless. We decided to take him home and keep him with us. Even if he was going to live for 15 days, it was okay. We did not want to put him through any more tests. But luckily for us, he got better each day, till he turned 4 months.” – Ramesh Kumar.

At four months, he had his first open-heart surgery

Although he had the Down Syndrome, Dhruvan never seemed any different from the other babies. All he would ever do was laugh. It was a joyous period for the family. But things changed when at four months, one day, he couldn’t breathe. His lungs had been clogged with phlegm and he underwent a treatment for 12 days. But there was no improvement.


When he was only 4 months old, the open-heart surgery was done. It went well and he was soon discharged. The parents were relieved.
"But a week later, he got breathless again. They said there were air locks in his lungs and he had to undergo another surgery to get them removed. His sufferings – they just wouldn’t end! ” – Vijay Priya, mother.

With his lungs severely infected, Dhruvan has been on ventilator support for more than two weeks now. He’s been unconscious but the doctors have said his condition is improving considerably.  With 10 more days in the ICU to aid his breathing, his infection will subside and he can go back home.

But the question is if his father can afford this treatment. Ramesh is the sole breadwinner of the family. He works as an accountant and earns Rs. 15,000 a month. Till now, the family has spent lakhs for Dhruvan’s treatment and surgeries. The treatment costs 5 lakhs and the parents have exhausted all their funds.

“Every time someone came for donations on behalf of a cancer patient or other sickness, I would feel miserable thinking of what the family and patients might be going through. I would donate every penny in my pocket. Today, I am in the same position and I wish I could get a few helping hands. I need to save my son. We have nothing left to give. Please help us save him,” – Ramesh Kumar.

Ramesh who has always helped people whenever he could, is now in desperate need of funds. Your contribution can help him save his son.