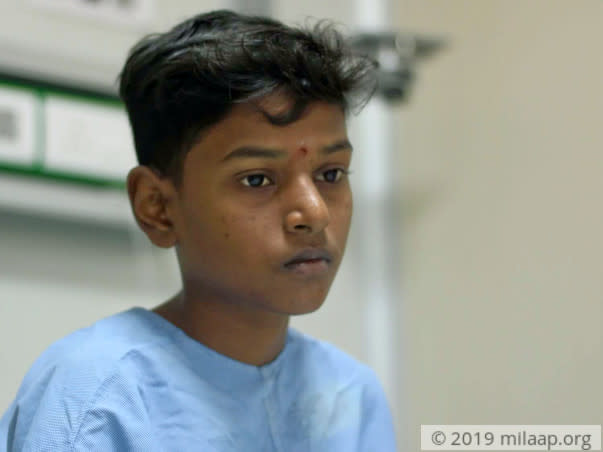 “For someone who loves automobiles, he’s never even ridden a cycle because of his sickness! It kills us to see him looking at kids riding cycles or men on bikes in awe! Why is my son the only one struggling?” – Tamil Mullai, mother.

While boys his age play games, 16-year-old Dhanush stands in a corner and watches them. He aches to go join them; to run and, to jump. He wishes he could eat all the different types of food his friends talk about; to go to school regularly; to get on a cycle and pedal away. But he knows he can’t. Because, his body won’t let him. This has been his life ever since he was 4-years-old.

“He was 3kgs when he was born, and was the most active child in our family. Ask anybody in our village, and they’d know him. But his life has been full of struggles! He's 16 now, and has been fighting diseases for years together. He's spent most of his life at the hospital! He barely talks, and keeps to himself mostly. When he does talk, he says he's fine, but we can tell he's hurting inside!” – Tamil Mullai.

At 4, his face had turned pale, drained of blood - Nobody knew why

It had been only two months since he had joined school when little Dhanush got a fever. After a month, his face became pale, like he was drained of blood. Afraid, the parents rushed him to a big hospital, and the test results marked the beginning of his nightmares. They revealed that little Dhanush was battling blood cancer.

“He was admitted for a month. There were multiple tests, each one proving fatal to our hopes. Eventually we had to begin his chemotherapy – for a child who was only 4. And then it took 3 long years of needles, medicines, pain and misery for him to get better. Finally they said it was cured. He got to join school again – like the other kids! But his hospital visits weren’t over. There were monthly check-ups and it was one such visit that revealed he was fighting another disease, just as deadly.” – Dharma Durai, father.

The Cancer was gone, but he was now fighting an End-stage liver disease

Years after his cancer was cured, the doctors noticed his stomach was swelling abnormally and found that his liver was getting damaged.To his parents' dismay, he was diagnosed with a co-infection of Hepatitis B/C. But they were told that if they began the treatment for this, the chances of his cancer relapsing were high. With no other choice, they let it be for then.

“He hates going out, because everyone keeps asking him why his stomach is swollen. It’s seen through his shirt...” - Tamil Mullai

Slowly but surely, his liver has been giving up on him

“Soon, the symptoms started showing up. He vomited blood and his stomach hurt a lot. Tests revealed that his liver was getting worse by the day. His hospital visits became more and more frequent. Sometimes, he had to miss school for weeks. After his 10th std, he refused to go to school, he said we were just wasting money on him.  Maybe he had given up on life...” – Tamil Mullai.

An urgent liver transplant is this 16-year-old's only hope for survival, but his parents can't afford it

“It wasn’t easy affording his treatment all these years. I'm just an accountant in a small hotel. Over the years, I've taken so many loans, and we've sold all our jewellery, to try and afford his care. Now, after all this time, when he’s still fighting death, everything seems pointless! But we have hope. They say a transplant can save him. Please, if you could help us save our son, we’d be indebted to you!” – Dharma Durai.

Dhanush has battled cancer all by himself. But he needs your support now, to beat Hepatitis. Your contribution can help save his life.
D
Patient Dhanush is 16 years old, living in Chennai, Tamil Nadu
GG
Being treated by Dr. Joy Varghese in Gleneagles Global Hospitals, Chennai, Tamil Nadu