Years After Being Declared Cancer-Free, This 8-Year-Old's Cancer Came Back Stronger | Milaap
loans added to your basket
Total : 0
Pay Now

Years After Being Declared Cancer-Free, This 8-Year-Old's Cancer Came Back Stronger 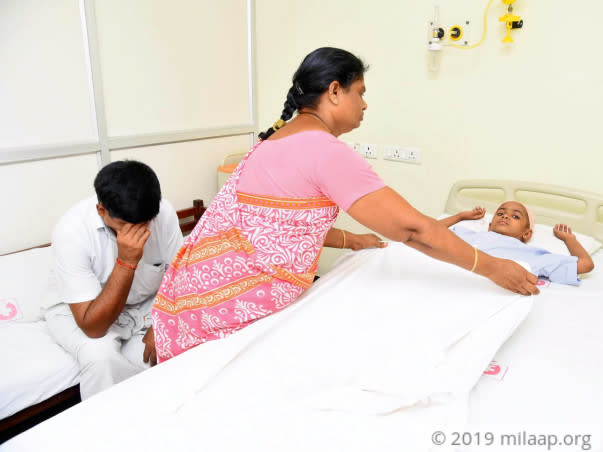 "She used to be so talkative, and bold. It kills me to see her tear-streaked face now. She’s become so quiet, and hardly smiles! She begs me to take her home and keeps promising she will always listen to me. What do I tell her? – Eshwari, mother.

When she was only 2, Bhavadharani suffered from a severe stomach pain

One day, not long after Bhavadharani turned 2, she refused to eat food. A child who rarely cried was now crying continuously. As unusual as it was, the parents did not worry much. Because, it was natural for children to cry. But soon, it became an everyday thing. She held her stomach and cried in pain, and her mother noticed her stomach was slightly swollen. Now very afraid, they rushed her to the hospital.

"When we took her to the hospital, the scans revealed that she had a cancerous tumor in her stomach. I was shattered. I never knew that the cancer disease that people spoke of, could occur in children! What made it worse was that, we knew nothing about the disease and we were terrified!” – Eshwari.

After years of treatment, she was finally declared cancer-free

Soon after she was diagnosed with cancer, she was admitted in the hospital, and her treatment, begun. A child of 2 years, Bhavadharani underwent radiation and chemotherapy. After 3 years of treatment, her parents were beyond joy when they were told she was cured. She did not have to fight cancer anymore!

"All we’ve heard about cancer is that, people die! But when the doctors told us she was cured; we could not believe our ears! We were relieved and grateful. Our only child was going to be alive after all! She led a normal life. She went to school like the other kids did! There was finally some colour in her life. But when she turned 7, everything became black and white, all over again!” – Balan, father.

At 7, when she hit her head on a window, her nightmare began, again

It had been a long time since she was cured of her cancer, and monthly check-ups had now become half-yearly check-ups. However, one day when she was in school, she hit her head on a window and was wounded badly. When rushed to the hospital, they gave her medicines and ointment. But the swelling never subsided. Suspicious, the doctors suggested a scan and they were shocked to see a tumor in her head.

“We were devastated! It couldn’t be happening all over again! The tumor was so big, we couldn’t sleep for nights. She underwent chemotherapy again and she was so afraid. When she first had cancer, she was a baby and knew nothing. Now, she could see the needles, the tubes. She could see her hair falling. Her head was shaved. She was terrified and cried so much! She wanted to go back home the moment we got to the hospital!” – Eshwari

Following her chemotherapy, she had a surgery and got the tumor removed. However, the doctors have stated that alone won’t be enough. At this stage, chances of recurrence are high and the only cure would be an urgent stem-cell transplant. The cost amounts to 6 lakhs, and the parents have no sources of funds.

Her father, a coolie, is struggling to gather funds

Balan worked as a daily wage labourer for Rs 200-300 per day. However, over the past few weeks he hasn’t been able to go to work. They have borrowed money from every known acquaintance to even bring her this far. To go through it again, they have neither the strength nor sources.

“I can’t even think of leaving her side now. She’d be terrified. So, there’s no work. No income. We’ve sold everything we ever had. I have nothing to give now! I can’t borrow from people whom I already owe money, and I don’t know what to do! She’s our only daughter. How will I save her?” – Balan.

They've done all they can to save their daughter, up to this time. Now, they're helpless and are in desperate need of funds. Your contribution can help them.

A
Anonymous Rs.2,500
3 others have contributed
Click here to know more about Bhavadharani

Donated to this campaign via Bank transfer/QR Code? Click here if you can’t find your donation listed below.
SK
Sahasra donated A$100