6-Year-Old Fears He Won’t Have Any Friends Because Of How Cancer Has Made Him Look | Milaap
loans added to your basket
Total : 0
Pay Now 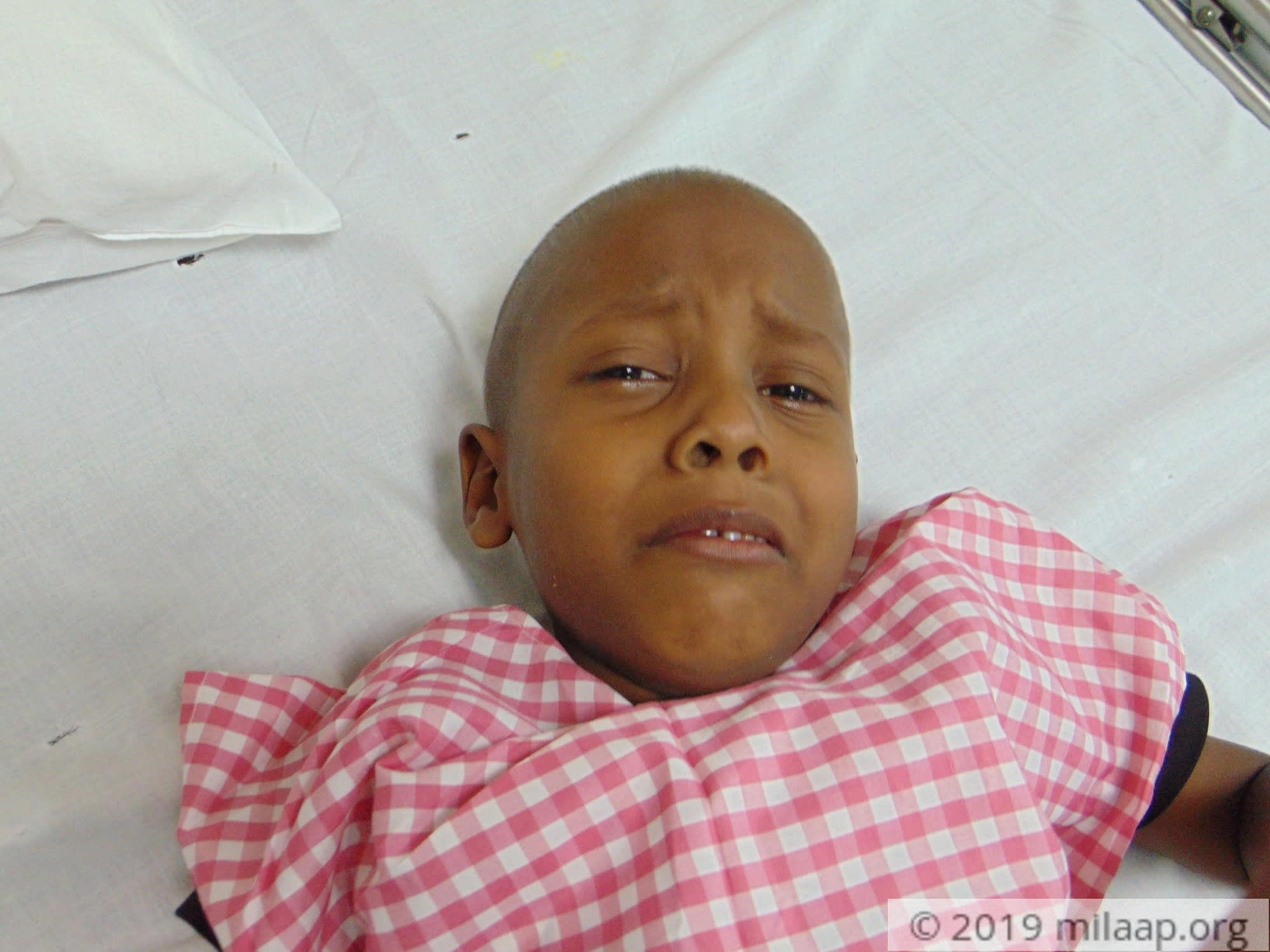 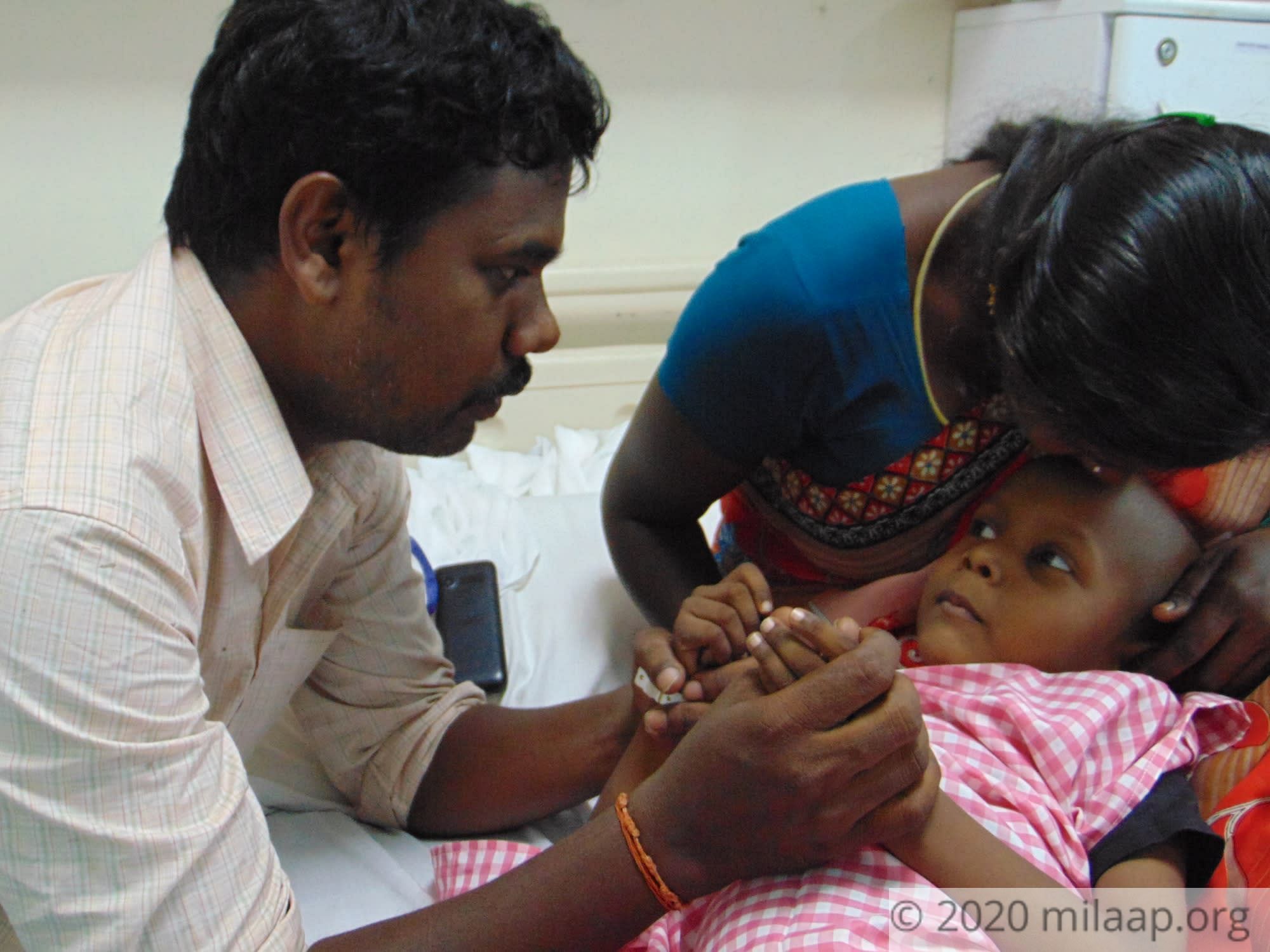 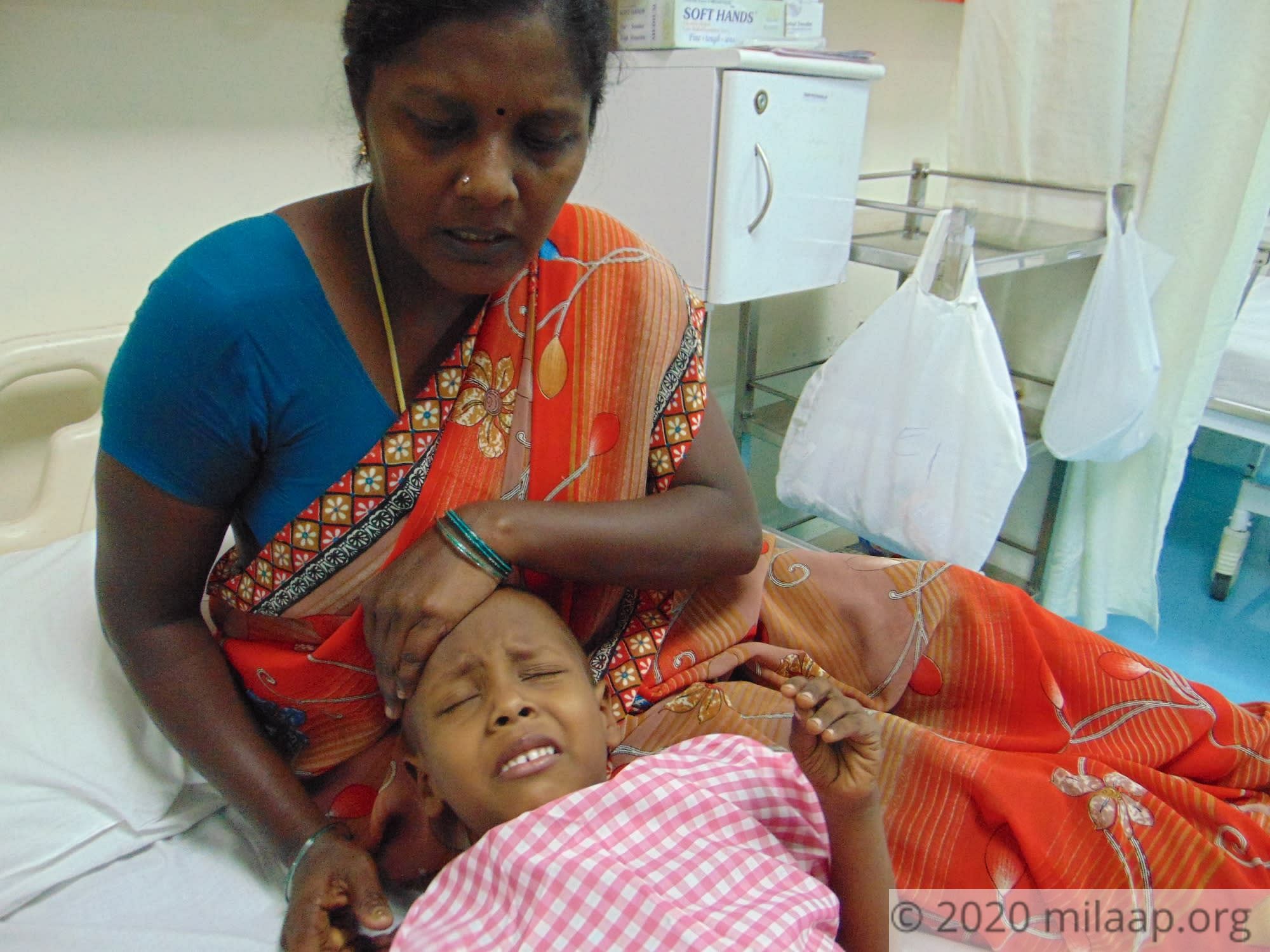 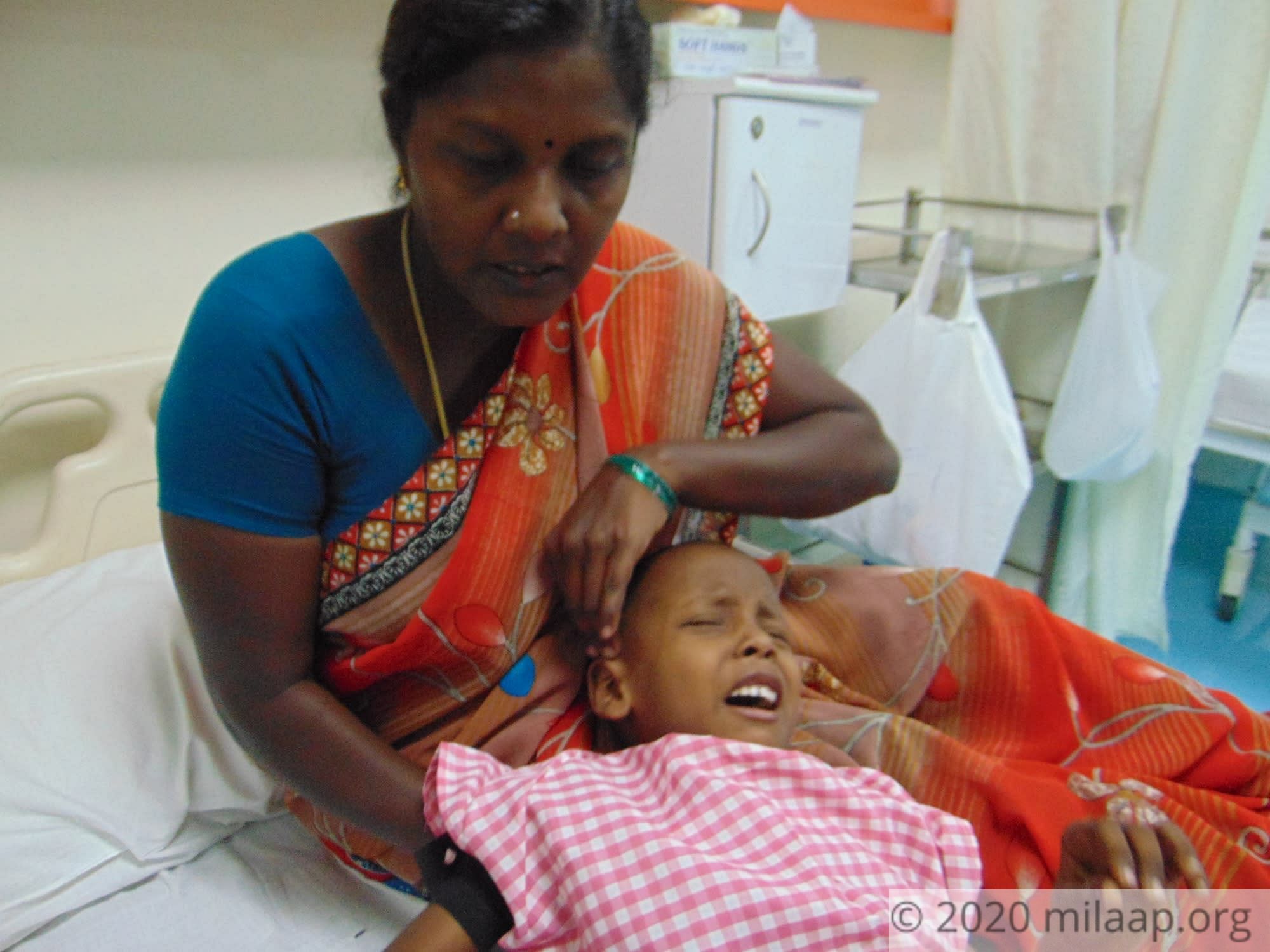 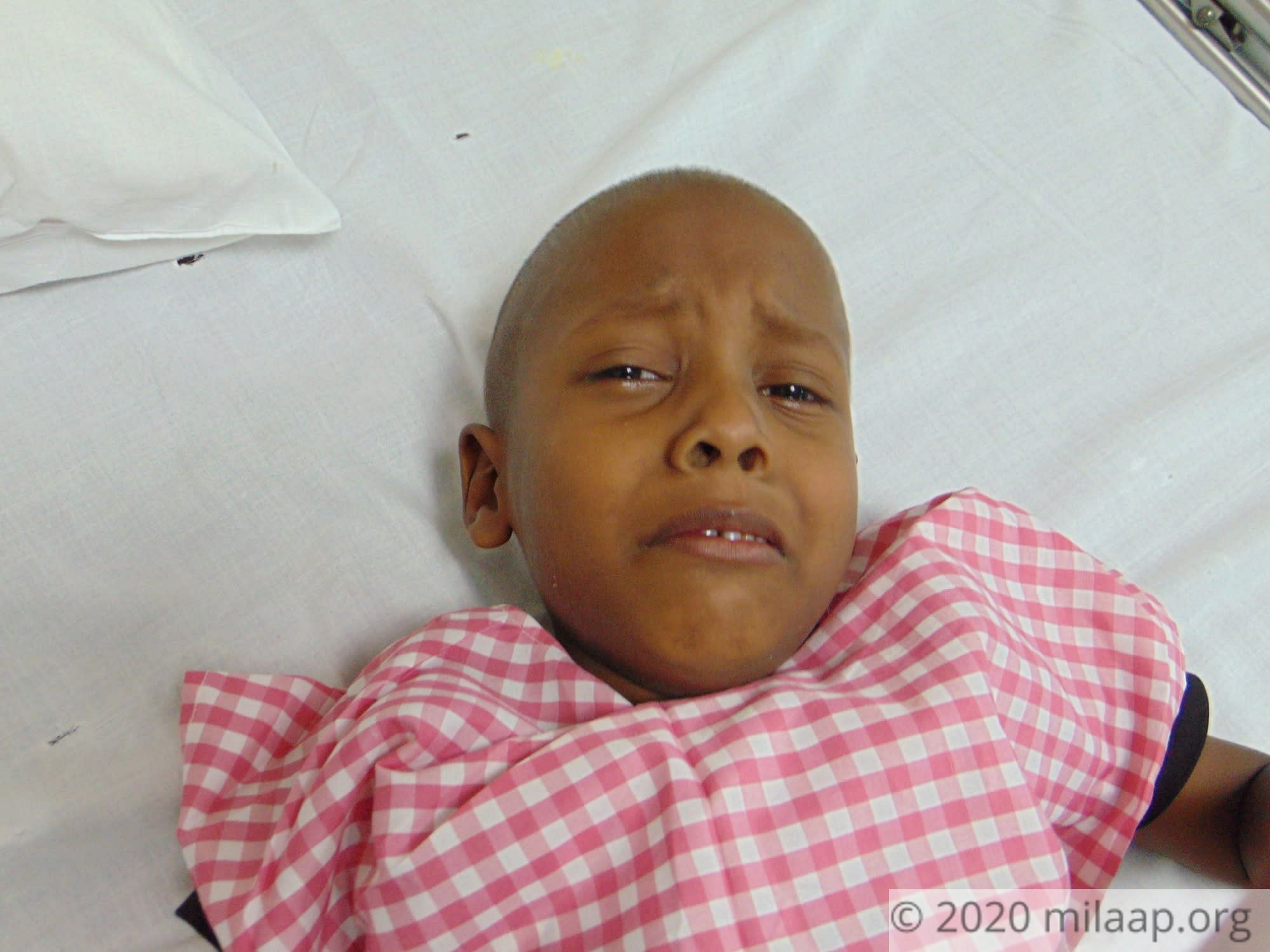 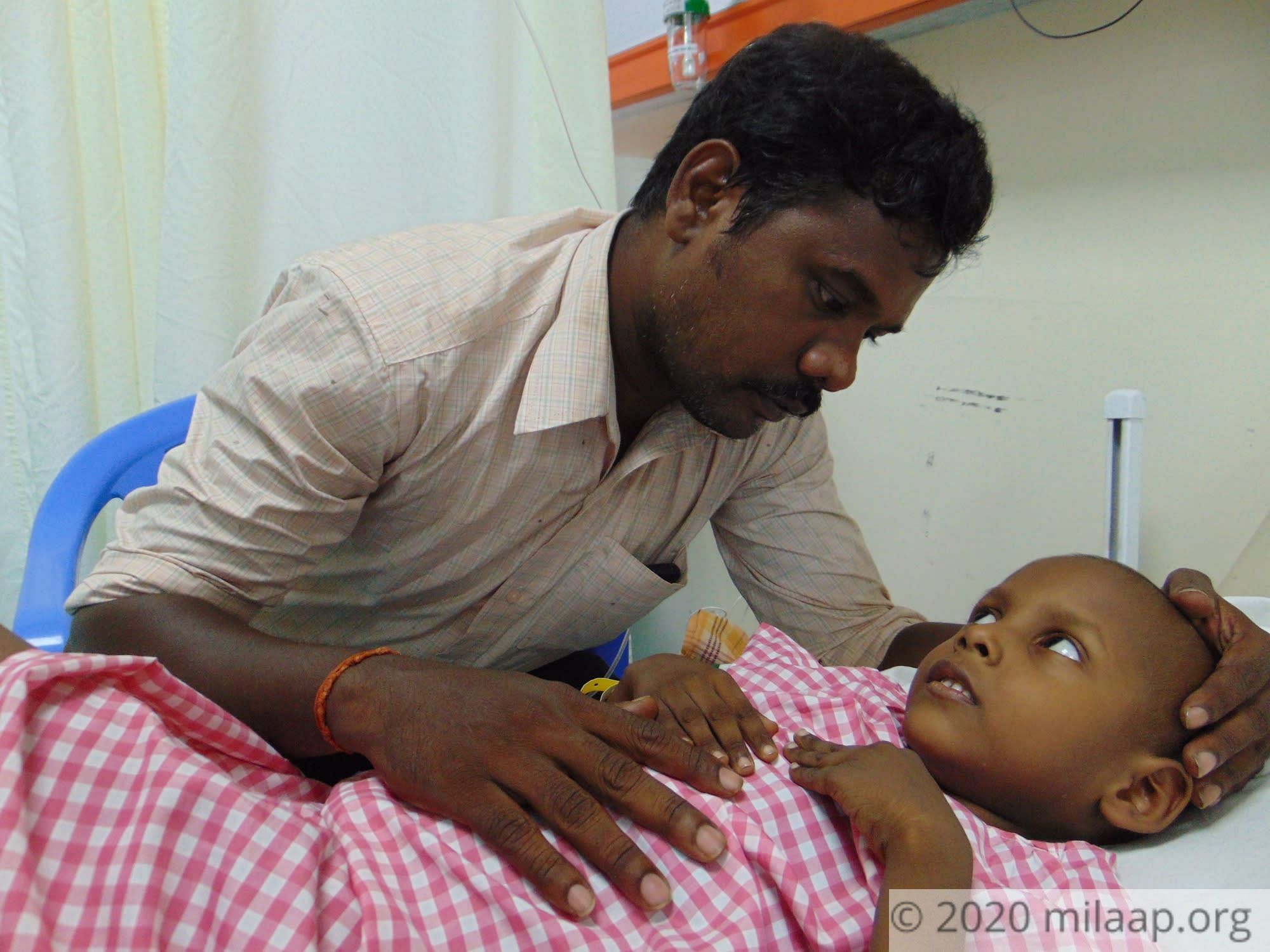 “They say it’s always calm before the storm and it’s so true. Our life was all about laughter and joy, till this sickness struck our little boy. Now, after months of sleepless nights, we still dwell in misery and fear – the fear of losing him….life has changed!” – Meenakshi, mother.

6-year-old Bavyan was a joyful child, and the life of his family. He would go to school and ace his tests. Once back, he would freshen up, finish his homework and rush out to play with his friends. After hours of running around and playing, he’d come back home on time, eat his food and even wash his vessels himself. It was rare to see him idle – he’d be building stuff with blocks, or begging his father to take him on a bike ride. He was full of life. But one fateful day, a deadly sickness struck him.

It all started with a severe stomach pain

“One day, all of a sudden, he complained of stomach ache. He would cling on to his stomach and cry. We took him to the hospital and followed the prescribed medication, and he was soon alright. But we knew something was wrong. He wouldn’t eat like before. He was losing weight. He had been 14kgs, and he had come down to 9kgs. He couldn’t walk or stand for long. He did not let us take him anywhere. He’d cry and scream and we were very afraid!” – Meenakshi, mother.

“We tried getting his stomach scanned numerous times, but he would curl up into a ball and scream in pain. We couldn’t take it!” – Kannan, father.

When they did finally manage to get his stomach scanned, they were in for a devastating shock. The scan results revealed a tumor in his stomach and he was diagnosed with high-risk neuroblastoma – a cancer of the nerve cells. By the time they got him admitted, it had already begun spreading, and the doctors began chemotherapy at once.

“We were in the general ward with all the other kids battling cancer, and I’ve seen some kids draw their last breath right in front of me. I pray, day and night. For them, and for my son. That’s all I can do” – Meenakshi.

“For the first two months, he had to stay in the hospital to undergo the initial treatment. He was constantly crying, and found it difficult to sleep at night. He wanted to go back home. He was scared of the needles, and the fact that he had lost all his hair. By the time we took him back home, he got used to the needles and the pain,” – Kannan.

Bavyan refuses to go out and play with his friends, he thinks they wouldn't want to play with him. He is embarrassed of his shaven head. The little boy hates looking different from his peers. While Bavyan cries thinking about how he looks, he doesn't know how serious his condition is. He needs a  bone-marrow transplant immediately after his chemotherapy, only then he can be saved. While the parents are relieved with the news, the cost involved has them worried and helpless. His treatment will cost between 6 to 8 lakhs.

"He has dreams of becoming a doctor and driving a car. Our only dream now, is to save him so his dreams come true!" - Meenakshi

“I work in a printing press and earn Rs.10,000 a month. It has been months since I’ve gone to work because I can’t leave his side. I feel hopeless. It has been months since he went to school. All the kids are out there, studying and running around; while he’s here, with his hands and legs marked with needle pricks. I am doing all I can to gather money, but it’s difficult. Whatever we had has all been spent on the initial scans and medication. We’re helpless!” – Kannan.

Little Bavyan is battling death. He deserves to live a long, healthy life and your generous contribution can give him that! 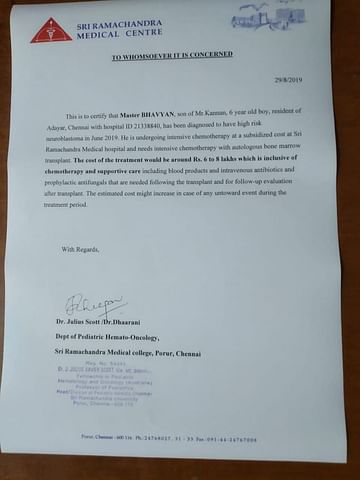 Click here to know more about Bavyan
Donate now
OR
Click here to read the instructions before you make a bank transfer.

A
Anonymous Rs.5,000
23 others have contributed
Click here to know more about Bavyan

Donated to this campaign via Paytm? Click here if you can’t find your donation listed below.
AA
Arjun donated S$200

Get recovered soon by God's grace and baba's grace. God bless you dear