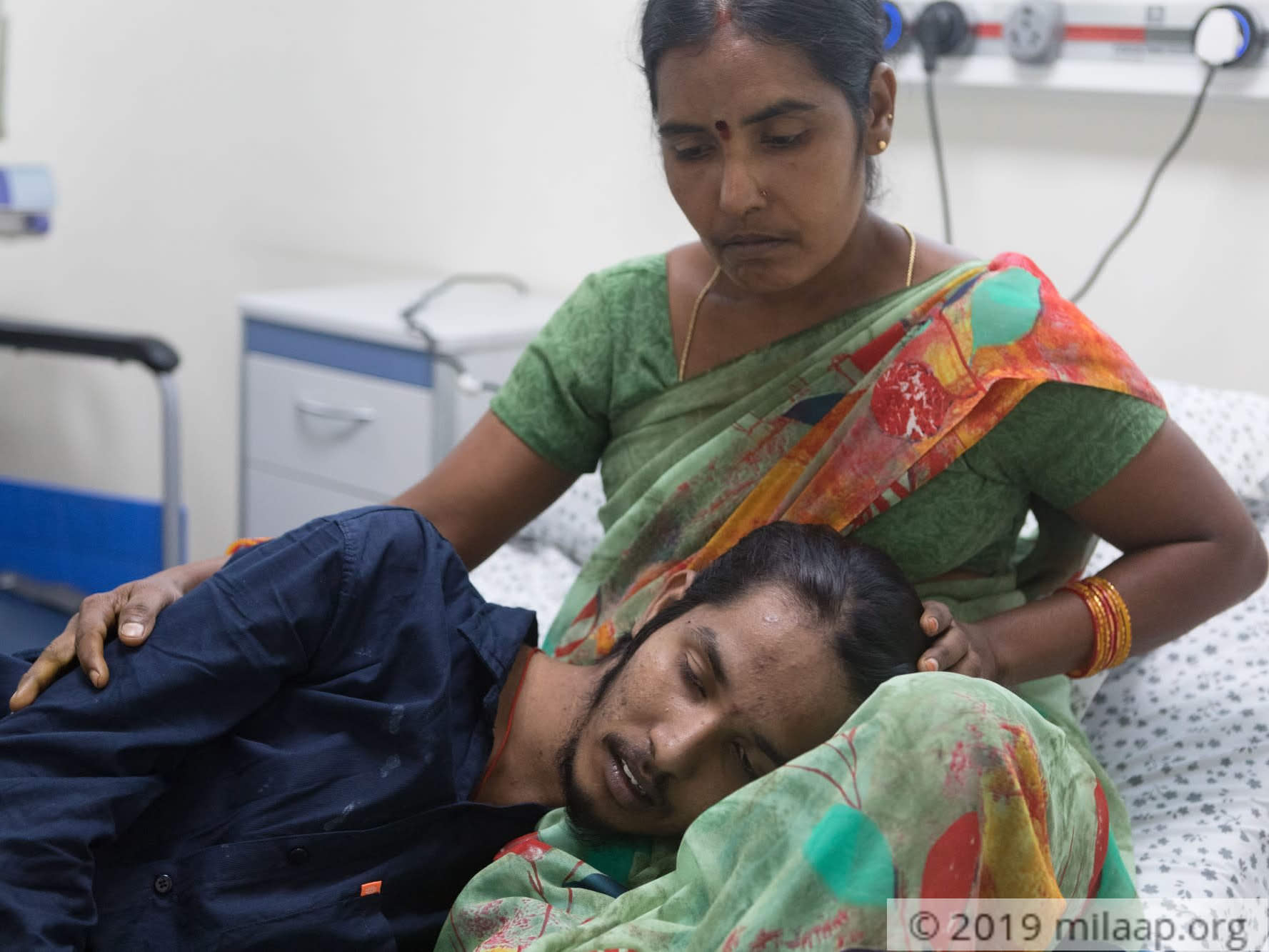 Share
I had taken him to a hospital because his hands started shivering very badly. I started mentally preparing myself because he needed an injection, and Raju has always been deathly terrified of needles. I knew he was about to yell, so I held him tightly.
But... the doctor brought the syringe out and... Raju started laughing. He laughed until tears came to his eyes, and then he kept laughing.
It was... it was the scariest moment I’ve ever experienced in my life.
– Bhoodevi, mother

Naga Raju was born to Srinivas and Bhoodevi 17 years ago, as their first child. Growing up, he proved to be gifted academically, much to his parents’ delight. Being daily-wagers, they both knew how important a good education was, and they had high hopes for his future. But now, he has been diagnosed with Wilson’s disease, a rare disorder that causes copper poisoning in the liver, brain, and other vital organs. The first sign appeared he was 8 years old, when they noticed his belly was swollen.

“We thought it was gas for a few weeks, because that’s what the doctor in our village said. But despite the medicines his belly kept getting bigger and bigger. So we took him to a city hospital. There they told us he had some liver condition! They gave us some expensive tablets and within a few days his stomach went back to normal. Now, nearly 10 years later, we’re finding out his problem is far worse than even liver disease!”

As his disease reached end-stage, she saw him change before her eyes

After that initial diagnosis, his parents were told that Raju’s liver condition is permanent, and he’ll need daily tablets as long as he’s alive to avoid complications. For the past 9 years they both have been working hard to afford the expensive medicines. Raju’s condition seemed to be under control. But 5 months ago, his hands started shivering and he started showing other symptoms like involuntary laughter. His disease was reaching end-stage.

“I could see him change before my eyes. Sometimes I would catch him just staring ahead blankly, and then suddenly, he would smile. But he doesn’t have control over any of this."

With a nearly-paralyzed husband, Bhoodevi doesn’t know how to afford Raju’s liver transplant

“My husband had a daily-wage job until two years ago, loading trucks with cargo for a small company. But he kept taking so many long and back-to-back shifts that he destroyed both his knees; he can’t walk anymore. It has been a huge struggle just to feed my children, as the sole earner. Now the doctors are saying his liver is days from failing, and only an 18 lakh transplant can save his life! I don’t want to lose my son! I can’t!”

With Srinivas unable to help, and two young daughters to take care of as well, Bhoodevi is torn. She wants to keep her son alive, but she doesn’t have any resources. Only you can help now.
Click here to donate, and help save this young man’s life.
BN
Patient B Naga Raju is 17 years old, living in Hyderabad, Telangana
RC
Being treated by Dr. Prashant Bachina in Rainbow Children's Hospital, Hyderabad, Telangana