After Losing Her Husband In A Tragic Fire, She's Trying To Save Her Son From A Similar Fate | Milaap
Receive tax benefits by donating to this cause.

After Losing Her Husband In A Tragic Fire, She's Trying To Save Her Son From A Similar Fate 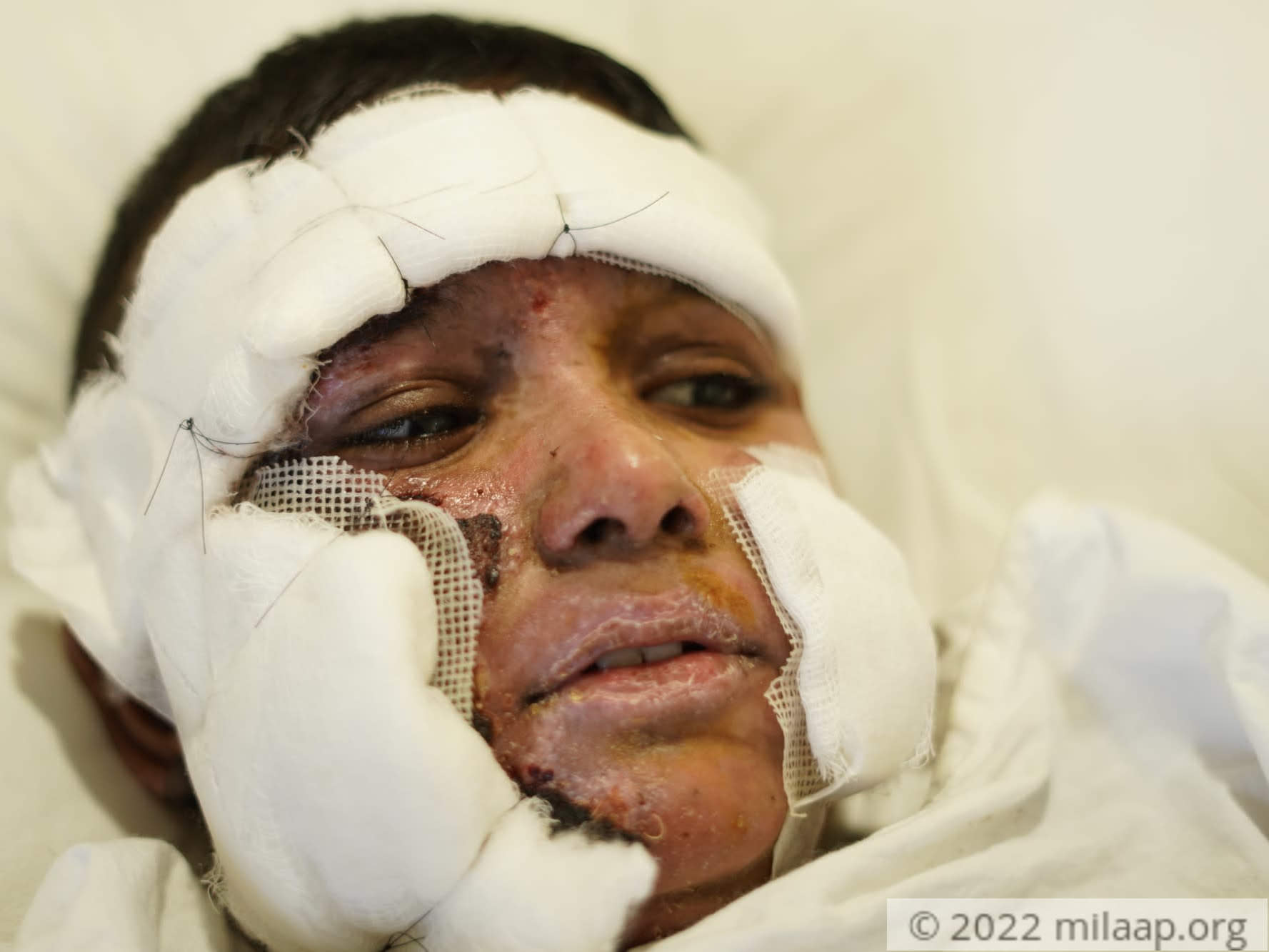 One cold January evening, Anas, his parents and two other relatives had been on the terrace, sitting around a bonfire and unwinding after a long day. As it seemed like the fire was about to go out, one of his relatives fetched a bottle of diesel to fuel the dying flame. In that moment, a strong gust of wind spilled the diesel, setting the terrace ablaze. Anas and his parents were severely injured in the fire, and his father, Saleem, later succumbed to his wounds.

He lost his father in the terrible accident

9-year-old Anas and his family had been attending a wedding in their hometown in Uttar Pradesh, when the accident occured. No one on the terrace was able to escape the flames, unscathed. Anas and his father sustained third-degree burns all over their body, while his mother, Falak injured her legs.

“We hadn’t even seen it coming. It was a chilly evening, and all we wanted to do was sit around a fire and enjoy our short time there. But happy giggles and laughter turned into screams of pain and agony in the blink of an eye. Anas had been wearing a jacket, which caught on fire and it scorched a majority of his face, hands and legs, and my husband also suffered severe burns. Both of them were in critical condition, but my husband was only able to hold on for a short while - he passed away some days later…” - Falak, mother

Saleem was in excruciating pain from the burns he had sustained and was being administered strong pain-killers, which took a negative toll on his body and damaged his kidneys. He had to undergo dialysis almost everyday, but it wasn’t enough to save him. He passed away from kidney failure, leaving behind his wife and 2 children. Their older son had been elsewhere at the time of the accident.

Although he is on the road to recovery, he needs prolonged treatment

While Falak was able to go home after a short-hospital stay and immediate treatment, her son is still writhing in pain from the burns maring his body. He recently underwent a grafting procedure for his face and hands, but there is still a long way to go until he can be discharged from the hospital with a clean bill of health.

“It’s been a week since his surgery, and by God’s grace, my son is recovering well. The doctors have assured me that his life is not in danger and he will get better with rest and medication. He’s covered in bandages from head to toe that needs frequent changing, and it will take some time until he is back on his feet. I am just very happy and grateful that the worst has passed, and my son is still here with me. I don’t know what I would’ve done if I had lost him too.” - Falak

Her husband was the sole breadwinner, now she’s left to fend for her family all alone

Prior to his death, Saleem had been a social worker, who made a decent income to support his family. They’d settled in a rented home in Mumbai, where their two children went to school. But now, a widowed mother, Falak has been left to her own devices. She’s single-handedly striving to save her son, while also raising her older son.

“I realise now how much easier life was when my husband was around. We weren’t wealthy, but we managed to live a comfortable life because he worked hard for us. Now, without him, it feels like my whole world has fallen apart. The little savings we had was used up in our treatment and I am thankful that I have kind neighbours and relatives, who came forward in our time of need. But I can’t keep asking them for help. I can’t be indebted to them anymore than this…” - Falak

This accident has completely destroyed Falak and her family, and they haven’t even been able to mourn the tragic loss of her husband properly as Anas was fighting for his life too. Anas’ treatment is still underway, but Falak has run out of resources to keep it going. The hospital bills are piling but she has no way to arrange 15 lakh rupees in such a short time.

Receiving treatment for Burns Over the Face Hand And Thigh