Even An Extra Drop Of Water Can Kill Him, He Needs A Kidney Transplant In 2 Days | Milaap
loans added to your basket
Total : 0
Pay Now

Even An Extra Drop Of Water Can Kill Him, He Needs A Kidney Transplant In 2 Days 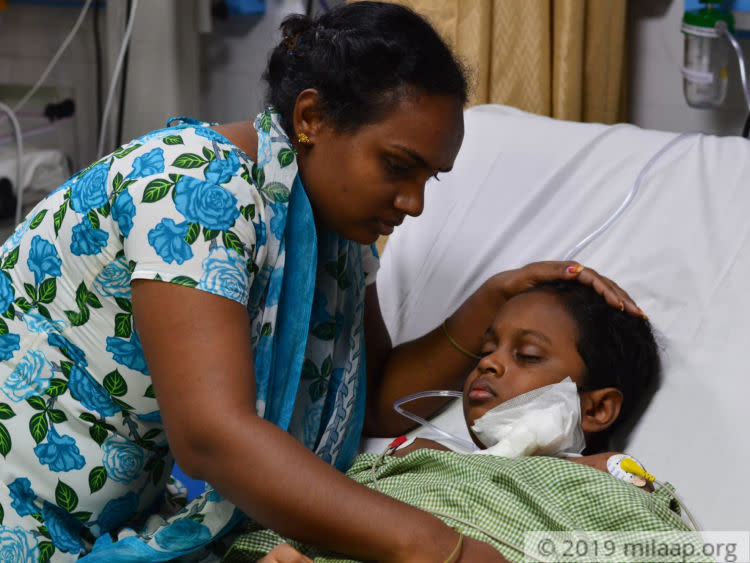 "His skin has turned dry and he is constantly thirsty because of the disease. He is on dialysis and can only drink few milliliters but he cries out loudly asking for more. It aches my heart to see him like this. It’s been months since we admitted him here and now he has only two days to get a kidney transplant. My husband is willing to donate his kidney but the cost...the cost is so high. We can never save him,"- Nalayiram, mother.

10-year-old Akshaya Naren has a symptom called renal agenesis where one of his kidneys did not develop when he was in the womb.

"When he was 2,  he got a fever and the temperature did not come down for more than two weeks. He was burning and no medicines could heal him. That night he started getting seizures and we had to rush him to the emergency ward. After many tests and scans, doctors told us the shocking news that my child has only one kidney. He was born with one and the hospital where I delivered him did not tell us back then ,"- Nalayiram.

"It’s been eight years since he had that  surgery. From then he lived a healthy life. He was active, went to school and even took part in sports.  We took him for regular blood tests. Everything was normal until three months back. His results showed that his levels have become dangerously high and the kidney was almost completely damaged."

Now he needs a new kidney before the old one stops working and he has two days to get it done. The dialysis line placed into one of his large veins through his neck is giving the child unbearable pain and he cannot move and sit because of it.

They have sold everything they have but they still can't save Akshaya, you're their only hope

The child’s father, Sorna Ramesh, is admitted in the hospital for the donor operation which is scheduled to happen in two days. He is a farmer who has sold his only piece of land to pay for his son’s surgery. Even after borrowing from his relatives he cannot match up even half of the amount.

We have sold everything for the treatment for the past few months. I have been saving money by eating only once a day. My husband and I are doing everything in our strength to save our only child’s life. But it just seems impossible, we need your help..."

Akshaya deserves a new kidney and a new life, free from pain and dialysis. He has only two days left to get it and you can help him through your generous contribution.

God will save him . dont worry