This 1-Year-Old Cannot Hold Toys Like Other Kids, Due to Rare Hand Deformity | Milaap
Receive tax benefits by donating to this cause.

This 1-Year-Old Cannot Hold Toys Like Other Kids, Due to Rare Hand Deformity 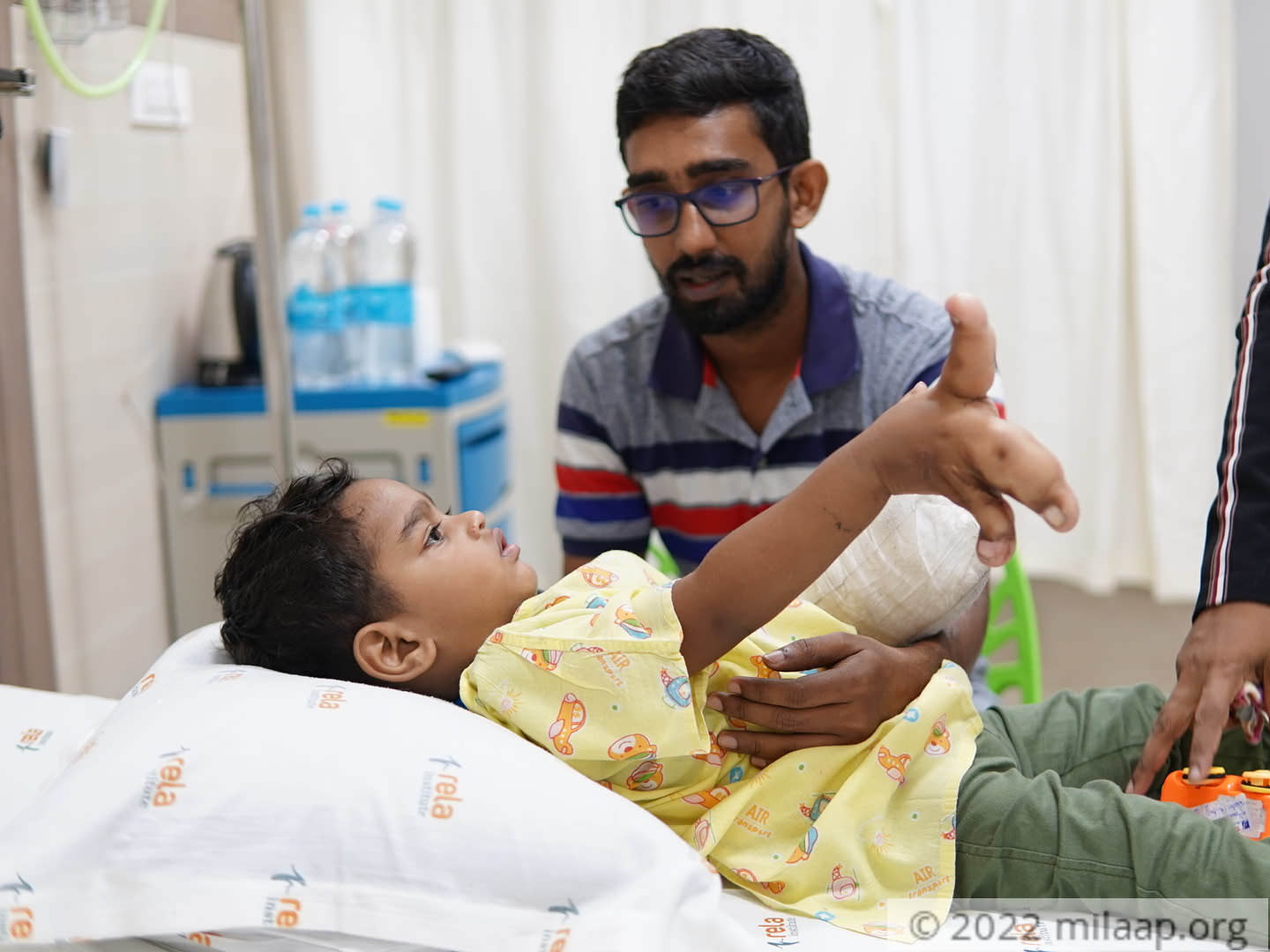 Share
1-year-old Aalif Ahamed cannot crawl or move about on his fours. His abnormally huge fingers do not allow him to grab onto things and explore them like normal infants do.

Baby Aalif Ahamed was born with a condition called bilateral hand macrodactyly, an uncommon condition in which his fingers are abnormally large due to the overgrowth of the underlying bone and soft tissue. Fingers on both his palms have been affected, and he needs a total of 6 surgeries to reduce the size of the fingers and correct them.


Hailing from Sri Lanka, Aalif’s parents Atheef and Saadiqul had to bring him to a specialist hospital in Chennai because of a lack of treatments options in their home country. With great difficulty coupled with the fact that Atheef lost the only job he had, they were able to afford one surgery out of the six, and have asked for time to arrange money for the rest.

‘We want him to lead a normal life… is that too much to ask for?'

Doctors have told Aalif’s parents that his condition needs to be corrected at the earliest, or chances are that his hands will always be deformed and have no functional ability at all.

The idea that their son could struggle with the smallest of tasks like picking up or holding something has disturbed them. In addition, they fear that he will be ridiculed in school and other social settings if his condition is not treated.

“We do not have big wishes or hopes for our son. We are simple people. But we want him to be able to take care of himself and his needs. We don’t want anyone to make fun of his condition or show him pity. Is that too much to ask for?” - Saadiqul, mother.

These parents are struggling to pool funds in time

“I am not able to find a job now that Sri Lanka’s economic crisis has gone from bad to worse. I find myself walking over 50 km a day away from home, in search of donors and funds. Nothing has worked out yet, and I am running out of hope, time and money.” - Mohamed Atheef, father

Mohamed Atheef used to drive a rented auto rickshaw in the streets of Sri Lanka, before he had to give up his job to bring his baby boy to India for treatment. He could only fund the trip to India and the first surgery by getting money from friends and relatives, and even some strangers.


But now, he has completely run out of money, and without a job, he is finding it difficult to feed his family too. Baby Aalif needs five back-to-back surgeries for his fingers to become normal-sized and work normally, but his parents have not been able to pool in even half of the money required for them.

You can help these parents who are trying to give their son a normal life. Click here to contribute.
AA
Patient AALIF AHAMED MOHAMED ATHEEF is 1 year old, living in Chennai, Tamil Nadu
RI
Being treated in Rela Institute, Chennai