Farmer's Son Fighting Bone Marrow Cancer Needs Help | Milaap
This is a supporting campaign. Contributions made to this campaign will go towards the main campaign.
Milaap will not charge any fee on your donation to this campaign. 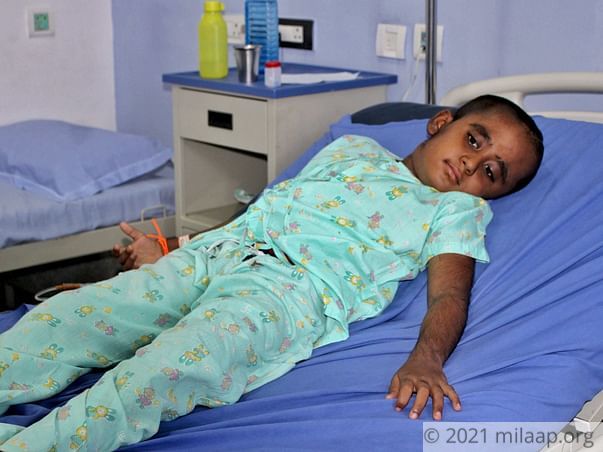 Anand has been forced to lie to his 11-year-old son, Vishnu, for nearly six months now. Every time Vishnu asks him how many more times he has to go to the hospital, he tells him that he has only a few more days of pain left. But the truth is far from it. Vishnu’s blood diseases have left him confined to his bed. When once he would refuse to go to bed on time and insisted that he had a few more minutes of play time left, now he can’t help to lie there all day. “It all began in July when he came back home from school. He was getting ready to play cricket with his friends when I noticed that his face and feet were oddly pale,” Anand recalls with sadness in his eyes.

For Anand and Akshata, it seems like just yesterday that their only son was running around on the beach during one of their family holidays, but now he’s only getting sicker. There is hope for Vishnu, though. A bone marrow transplant can relieve him of his pain.
In just a few months, Vishnu’s appearance started changing – his health was deteriorating
Vishnu has been diagnosed with not one but two blood diseases. He has paroxysmal nocturnal hemoglobinuria, a condition in which red blood cells are destroyed, and aplastic anaemia, due to which his body has stopped producing enough new blood cells. He was initially started on medications, but his condition only got worse.

“He couldn’t eat anything, he started having excess growth of hair on his body and one day, he suddenly fell unconscious. They told us it was because of a bleed in his brain. He had a surgery immediately, but this can happen again anytime if he doesn’t get a bone marrow transplant. He looks nothing like he used to before he was diagnosed with the diseases. We just want our son to go back to living his healthy life.” – Anand, father
His parents have spent 17 lakhs on his treatment so far – they’re now left with little
Anand is a farmer from Chikballapur, Karnataka.Vishnu would often accompany him to see the fruits growing on their land. He would run around the 2 acres of land, throwing his cricket ball around, sometimes jumping up to pluck the grapes. However, ever since Vishnu’s diagnosis, their once thriving farmland is now dry and abandoned. Anand hasn't been able to work in six months now, and he had no option but to sell one acre of his land and borrow from money lenders to start Vishnu’s treatment. He has nearly spent 17 lakhs now, another 25 lakhs is just impossible for him to afford.
“My wife and I left everything behind in our hometown and moved to Bangalore for his treatment. Everything that we do now, is for him. He’s our only child.” – Anand
How You Can Help Vishnu
Vishnu needs a bone marrow transplant at the earliest. His father is a matched donor for the same, but after spending lakhs on his treatment already, he’s left with little at hand. Your support will give Vishnu a healthy life, where he can run around and play like he longs to.
You can also do a bank transfer to the below mentioned account setup for this fundraising campaign:
UPI: givetoanandfund@yesbankltd (Click to pay)Or 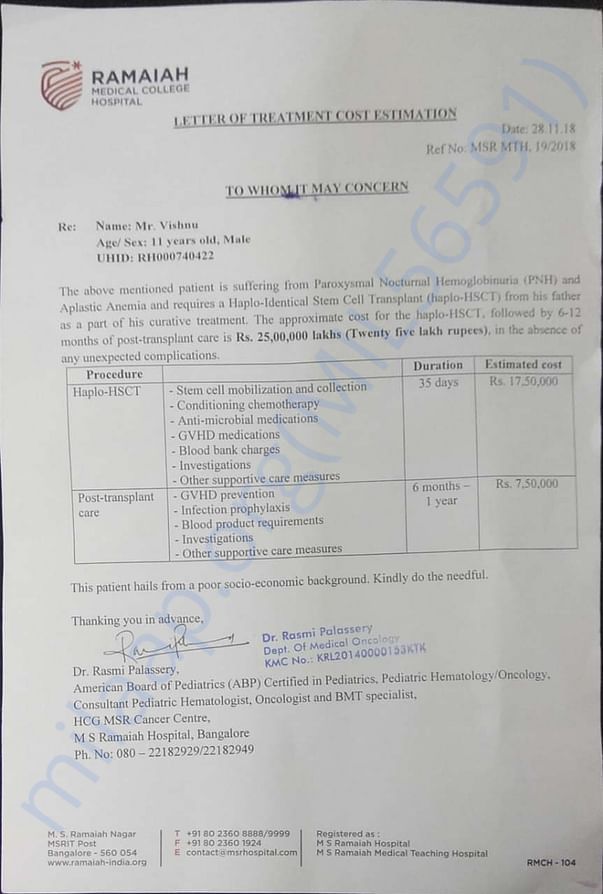 Vishnu is planned to undergo his  Bone Marrow Transplant tomorrow and his father is going to be the donor. Post his, he will be in the BMT unit for around 25-30days. We shall keep you posted.

Scan & donate with any app
check_circle_outline Download payment receipt
Report fundraiser
Know someone in need of funds for a medical emergency? Refer to us
Rs.94,935 raised

VN
You are sending a message to
Vijay Narasimha
Go back 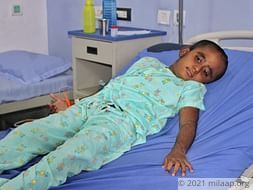