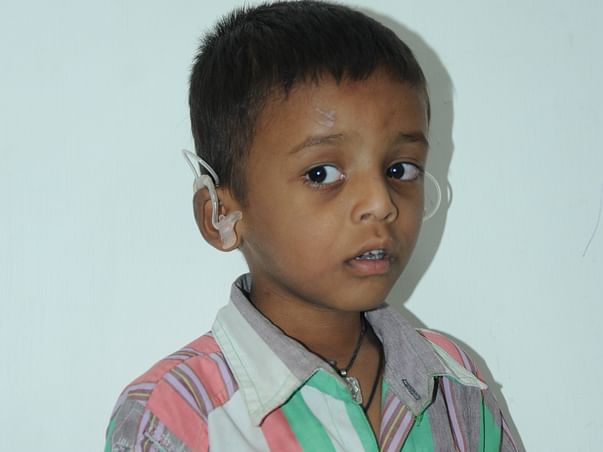 “Everyone said he will learn to speak. They said every child takes time to speak. He turned 3 years old, and still not a word came from his lips. We didn’t even know he was deaf. He was such an amazing child that we did not notice anything strange.”
4-year-old Vijaykumar is an adorable, cheerful and playful little boy who has been diagnosed with a profound hearing loss in both ears. He has not spoken a word from birth until now, and needs a cochlear implant at the earliest so he can have a normal life growing up.
Yellaiah and Shivalakshmi are daily wage laborers in the small village of Venkatapur, Telangana. Together they make Rs. 12,000 to feed a family of four including Vijaykumar and a younger daughter Gayathri.
“Vijay is my dream come true. I always wanted a son, and he is my pride. When he never spoke, we did worry, but people around us assured us that he will in time. Once when he was 3, he spiked a high fever. In our village, we do not have hospitals or clinics. We had a visiting doctor at the time. While examining him, the doctor said something was wrong with Vijay and we had to get him tested.”
The RMD doctor performed a primary examination and discovered that Vijay was deaf. Anxious about their son, the parents took him to a government hospital in Koti, Hyderabad, for tests. They met an ENT specialist who confirmed the diagnosis. Vijay had profound hearing loss in both ears. All tests were conducted free of charge. The doctor referred them to Apollo for a cochlear implant surgery which would help Vijay hear and speak.
“He is my only son. He means everything to me. I have to give him the chance to live a normal life. We went to get the estimate for the surgery and it was so expensive. We could not afford it. Heartbroken, I fell to the doctor’s feet in the operation theatre itself. I begged him to help me give my son the life he deserves.”
A local MLA helped Yellaiah to get Rs. 2 Lakhs from CM fund and Rs. 3 Lakhs from PM fund for the surgery that is estimated to cost Rs. 8.5 Lakhs. The family still needs Rs. 3.5 to go ahead with the treatment.
“When the RMD doctor said that Vijay won’t speak at all, I felt our world crumble down. Now we know there is a chance to fix it. We have to take it for my son’s sake. He is a brilliant kid. He writes so well. His teachers appreciate him a lot. There’s another child in his class with the same condition. Vijay’s teachers said cochlear implant helped that child to improve and now he is able to interact well with his environment. They encouraged us to go forward with the treatment because Vijay is really bright, and he could have a better future.”
Yellaiah is deeply saddened by the fact that his neighbors now treat his son differently. Disability is not taken well in the village and is deemed weak. This father does not want his son to grow up abused, ridiculed and feel like he is lacking something.
“Although he behaves like a normal child, he is unable to communicate sometimes. The frustration makes him throw a tantrum and at the time, his screams are intolerable. We just end up giving him whatever he wants.”
The family has nobody else to help them fund this surgery for Vijay.
Your contribution will gift this boy a better future.