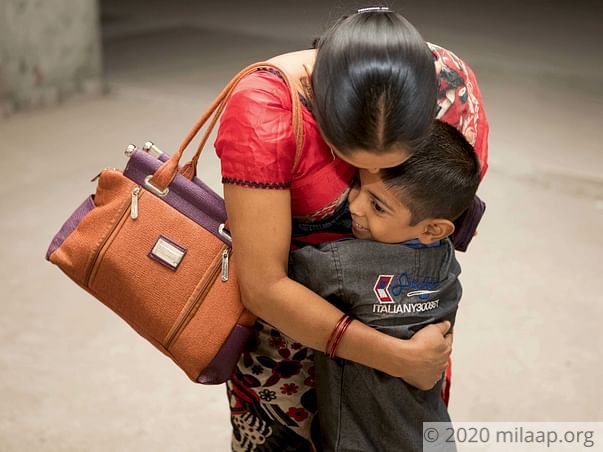 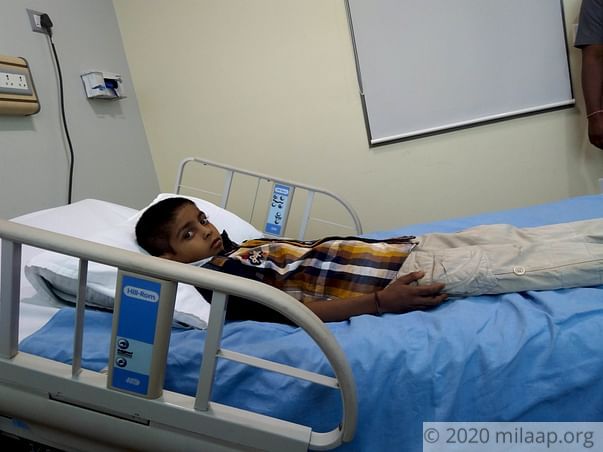 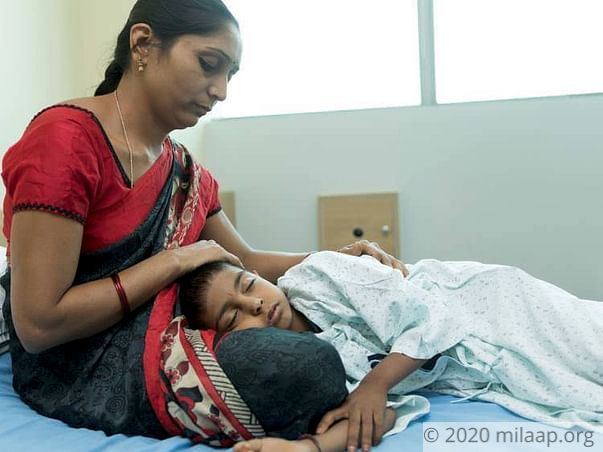 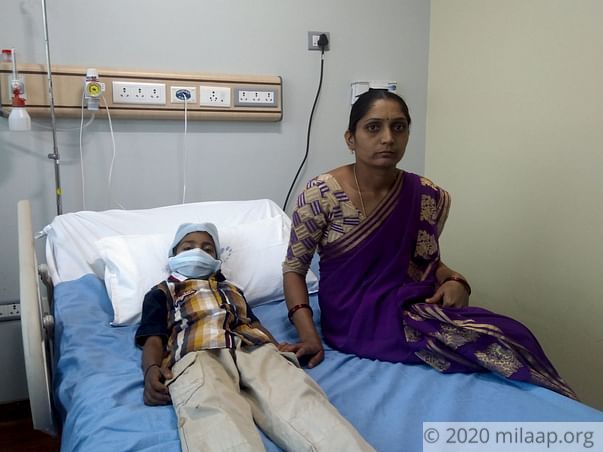 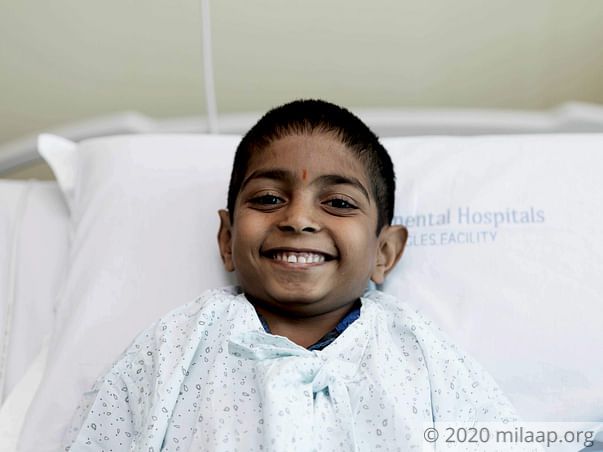 “The doctors say he is short for his age, his growth is stunted. He never has any appetite.”

Since the past 1 year, little Varun has been sick, with his kidneys failing. Following a prolonged fever, he got an infection in the urinary tract. When he started complaining about pain while urinating, his mother Saritha took him to the doctor. He was diagnosed with kidney failure. At this young age, both his kidneys have failed and only a transplant can save him. His condition is so critical that the doctors have warned his mother to expect the worst.

Varun is a very cheerful child and when one looks at him, they can’t guess at how sick he is. He always has a bright smile on his face and is very active. This 8-year-old boy has no idea of how serious his illness is, and thinks that with a few medicines, his body will stop hurting again. He does not know that if his kidney is not replaced soon, he might not stay alive. Luckily, he found a donor in his maternal grandmother, who is a perfect match.


Despite being critically ill, little Varun is always ready with a sweet smile

Varun’s doctors say that his condition has deteriorated so much, that without an immediate transplant, his body will collapse and it will be too late to save him. As of now, he is being sustained on medication but this won’t work for a long time. His mother brings him to the hospital almost every alternate day for evaluations and consultation. Saritha worries for her son’s life because this is not the first time a member of the family fell prey to kidney disease.


“His father had the same problem. And we lost him a few years ago on the way to the hospital in an accident. I cannot bear to lose my soon too. He is all I have left. It is very difficult to handle all of this on my own. I wish I had someone to help me out.”

Saritha is a 32-year-old single mother handling the responsibility of her son’s treatment on her own. Since her husband passed away, Saritha has been raising Varun on her own. Especially lately, not a day goes by that Saritha doesn't think of how much better she and Varun would feel if her husband was still with them.

Her husband got sick with a kidney disease too and was undergoing treatment. Unfortunately, he also developed a heart disease and was on his way to Hyderabad for tests when he met with an accident and died. Since he was coming for his check-up alone, no one from his family knew about his death until 5 days later, when his body was identified and the family was. Varun was barely one and half years old then.

After her husband passed away, she moved to her parents’ house in Shadnagar, a small town in Ranga Reddy district. Saritha and Varun come to the hospital in Hyderabad very frequently for his tests and treatment. Admitting him to the hospital would be a much better option, but Saritha can’t afford the expense of hospitalising him. So the mother and son travel back and forth every time he needs to visit the hospital.

Along with Varun, Saritha also takes care of her aging parents and is the only earning member of the house. She works as an agricultural labourer and only her income allows her to manage the basic expenses of the family. Try as she might - Varun's treatment is becoming impossible for her.

So far, Saritha has spent over Rs 3.5 lakhs towards his treatment, by taking loans. She is doing her best to provide Varun with the treatment he needs. He has even found a donor. Now, all that stands between him and his surgery is the lack of funds.

Varun doesn’t have too long to live if he doesn’t get the transplant soon and his mother’s poverty shouldn’t decide a cruel fate for him. To save Varun, Saritha needs your help. Your contribution can save Varun and give him a second chance at life. 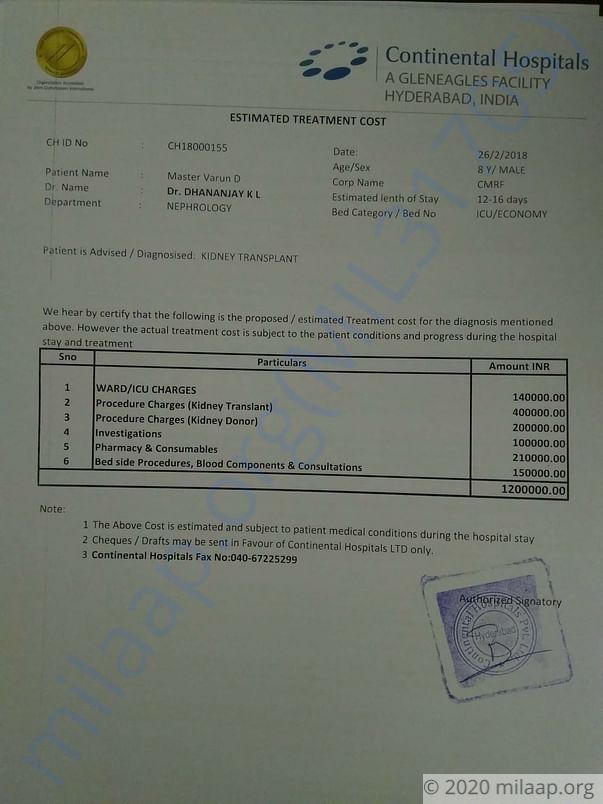 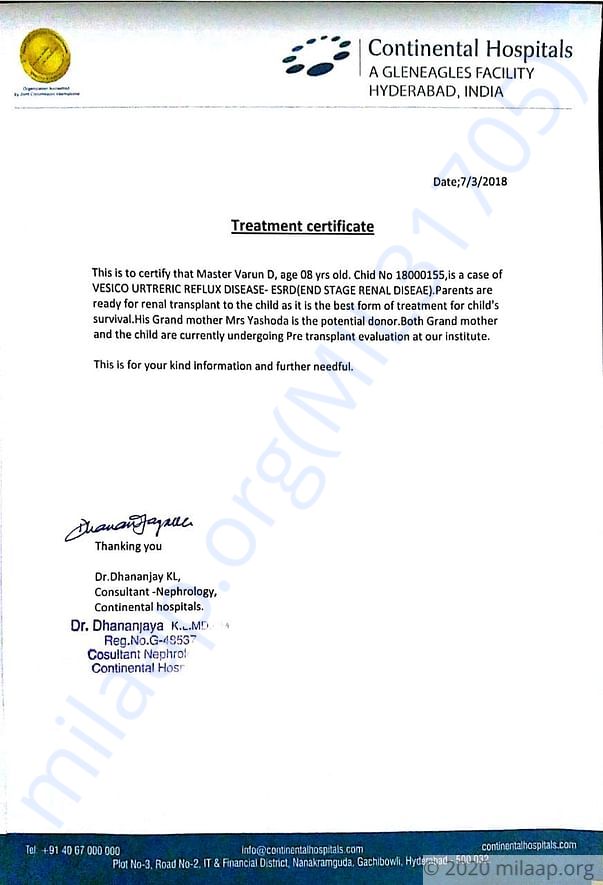 Thank you so much for the wonderful support you have shown towards Varun.

He is  is doing well  and the creatine has been controlled and the KT is success post surgery treatment is going well and the kid is doing better.

Our Prayers and wishes to get well soon,god bless you.

Get well soon buddy, praying for you...

Our Prayers and wishes to get well soon,god bless you.

Get well soon buddy, praying for you...

R
You are sending a message to
Ramesh
Go back 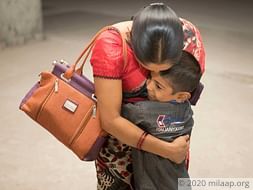