11-year-old Cancer Patient Thinks He Has Bugs In The Body | Milaap
This is a supporting campaign. Contributions made to this campaign will go towards the main campaign.
Milaap will not charge any fee on your donation to this campaign. 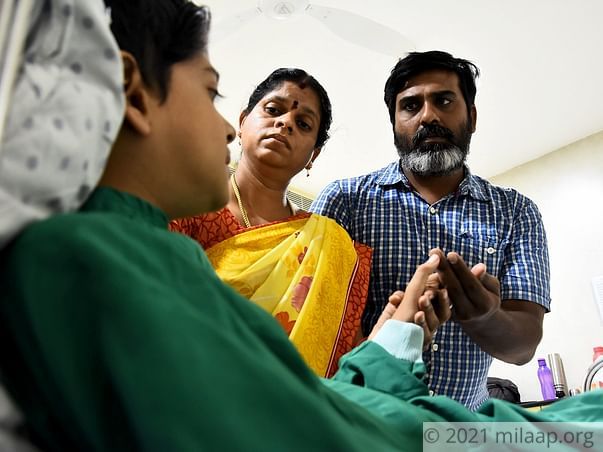 “We have not told him that he has cancer. He has seen people with cancer before and it really scared him. His mother has told him that he has some bugs in his body that are causing his weight loss. Our poor son believed us, like always. Little does he know that we have literally sold everything we ever had to make sure we don’t lose him” - Prem Kumar, father of 11-year-old Guhan Kumar who has acute blood cancer.

Guhan’s parents were worried that their sweet boy was losing weight rapidly; a trip to the doctor gave them the shock of their lives

Guhan Kumar was an active student who loved sports and studies equally. He never had any frequent health issues and always recovered well from fevers, according to his parents. Since last year, he has been losing a lot of weight. His parents believed he had nutritional deficiencies and took him to a good doctor last month.

“Guhan was into a lot of physical activities at school, so we thought that he was losing weight because he didn’t eat good food and wanted to get it checked with a doctor. We were just expecting to get a prescription for vitamin tablets and syrups; we couldn’t believe it when they said the word ‘cancer’. I couldn’t hold back my tears. When we came outside the doctor’s room, Guhan noticed my red, puffed up face and asked me what’s wrong. But I kept my cool and told him I was having an allergic reaction to dust” - Revathy, Guhan’s mother.

After Guhan was diagnosed with a severe form of blood cancer last month, his parents were told that he had to be started on chemotherapy immediately. Premkumar had no choice but to close his small grocery shop in Palayur village and move to Chennai with his family.


“We didn’t have time to waste because his cancer would rapidly spread to other organs otherwise. We couldn’t take that chance with our son. So I took whatever little money I had, borrowed from my elder brother and relatives and just took off to Chennai. I didn’t think of anything except my son who could have been potentially dying. When such situations arise, you are forced to take decisions, even when you don’t know what lies ahead” - Prem Kumar

Guhan cries every day because he wants to go back to his village, but his mother consoles him by saying that staying in the hospital will help him put on weight and be healthier

Guhan has never stayed away from his village and his friends for so long in his life. The hospital environment and being surrounded by adults only has taken a toll on him. He cries himself to sleep on some days; whereas on some days he is pretty understanding.

“The worst part is controlling my tears in front of Guhan. I have to keep lying to him to make him stay in bed, stay in the hospital. It has been agonizing to have to lie to your own child."

This small family is striving hard to be happy again

Prem Kumar’s small grocery shop was the family’s only means of livelihood. He managed to eke out a decent living for his only son with his shop – it was everything to him and yet today it is closed because of this sudden crisis that has befallen the family. But Prem Kumar is not worried about the shop; his only worry is that he won’t be able to keep up with his son’s burgeoning medical expenses because he does not have a source of income now.

“That shop was quite small, but it was my life. Now, it is not there anymore. I do feel bad but more than that, I am scared that I will not be able to help my son Guhan. He needs to be alright – that is all that I am thinking of right now” - Prem Kumar

Prem Kumar has spent almost Rs 4 lakhs of borrowed money on Guhan’s treatment already. Guhan will need at least 3 years of advanced chemotherapy to survive and his father is not so confident about arranging money for it on time. Currently, the family stays in a rented room in Chennai which alone costs Rs 12,000. His medicines and injections also cost extra money, which has become very difficult for Prem Kumar to manage.

“I want to make sure that my son survives, but I don’t have the Rs 15 lakhs required to make that possible now. It is a sad situation. I hope nothing happens to my son while I scramble for money to save him”-Prem Kumar

Your small contribution can help save Guhan Kumar 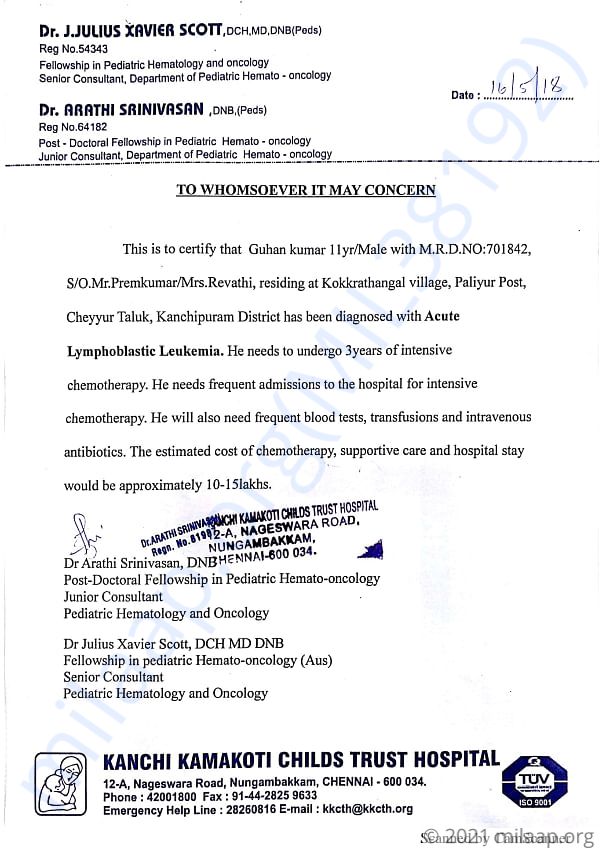 This is to inform you that Guhan Kumar is currently undergoing chemotheraphy and is on maintenance phase of therapy. He is responding well.  He has to visit the hospital for regular follow ups.

Guhan's Acute Lymphoblastic Leukemia is in remission. He is on maintenance chemotherapy and doing well.

I am thankful to all of you for the love and support.

Guhan is doing good and is undergoing maintenance chemotherapy now. He has to undergo the same for another 2 years. 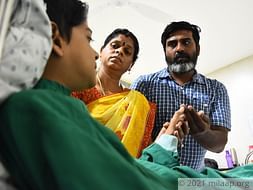