Cancer Will Take My Son Away This Time Without Your Help | Milaap
This is a supporting campaign. Contributions made to this campaign will go towards the main campaign.
Milaap will not charge any fee on your donation to this campaign.

Cancer Will Take My Son Away This Time Without Your Help 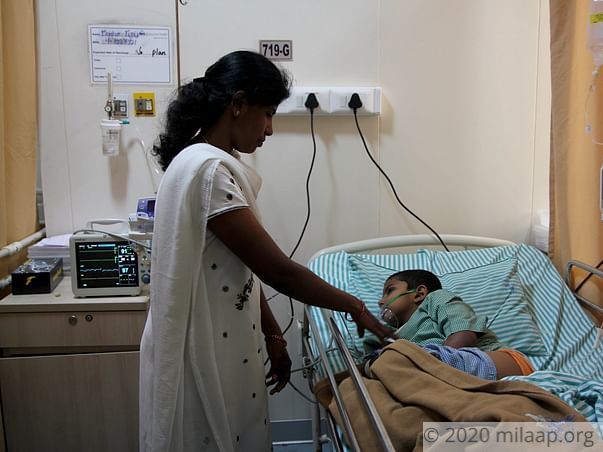 After nearly a year of gruelling chemotherapy and medications, Tejas was finally told that he could go back home again. Doddamoge Gowda and Jagadamba thought their son had survived the worst. They felt blessed to have their son alive and on the road to recovery after his battle with cancer. Unfortunately, their happiness was tragically short-lived. 6-year-old Tejas’s cancer relapsed and is now deadlier than ever.

Tejas’s fight with cancer began in 2015. Doddamoge remembers how it all began as a mere leg pain followed by fever. When no medication helped him, they got blood tests done only to be given the most devastating news of their lives.


“When the doctor said he has blood cancer, we were stunned. He was only 3 then. Ever since then, his life has only been about hospitals. Over the years, he’s become so terrified of hospitals. Even the sight of a needle makes him cry. He was such a cheerful child before cancer. He used to run around our house, happily playing with his sister. He doesn’t even talk much anymore. Cancer has silenced my son, and this time I’m afraid it might be forever.”

“Tejas’s second fight with cancer has only just begun, but he hasn't given up”

Tejas had 8 long months of chemotherapy followed by multiple medicines every day when he was first diagnosed with blood cancer. Once he was done with chemotherapy, his parents thought they were taking home a cancer-free child. They hoped for a better future for him after his life was so brutally altered by cancer.

With each monthly checkup, he was improving. Soon, even his medicines were stopped. There was nothing but hope for Tejas and his parents.


“Now when I look back, that seemed like the calm before the storm. He was finally happy again and slowly getting back to how he was. We thought he had beat cancer completely, but earlier this month we were told that his cancer was back. This fight is only going to be harder for him. He cries in pain all the time, and sometimes he can’t even breathe. Even chemotherapy is not enough now."

“He fought cancer once, and he can do it again, but we’re totally helpless now”

When Tejas’s cancer returned, Doddamoge had no option but quit his job as a Kannada teacher in a school in Bangalore. It was the only way he could look after Tejas with his wife. Doddamoge is the sole breadwinner of the family, and years of medical expenses have left him with a measly amount of savings. He’s now struggling to meet even day to day expenses for his family.


“He fought cancer once, and he can do it again. But this time, we need help. I have nothing left to go on with and the amount for the bone marrow transplant is far beyond what I can afford. I never thought my son would be back on the hospital bed, suffering again. I tell him everything will be fine soon, but at the back of my mind I know that if I can’t continue treatment, there’s no way for him to make it.”

Tejas’s blood cancer has relapsed and he needs a bone marrow transplant to survive it this time. Doddamoge was forced to quit his job to take care of Tejas. With no steady income, he can’t afford the 30 lakhs required for his treatment the second time around. Tejas can beat cancer once and for all, but he needs your help to finally break free from the clutches of cancer.

Your support can save Tejas’ life. 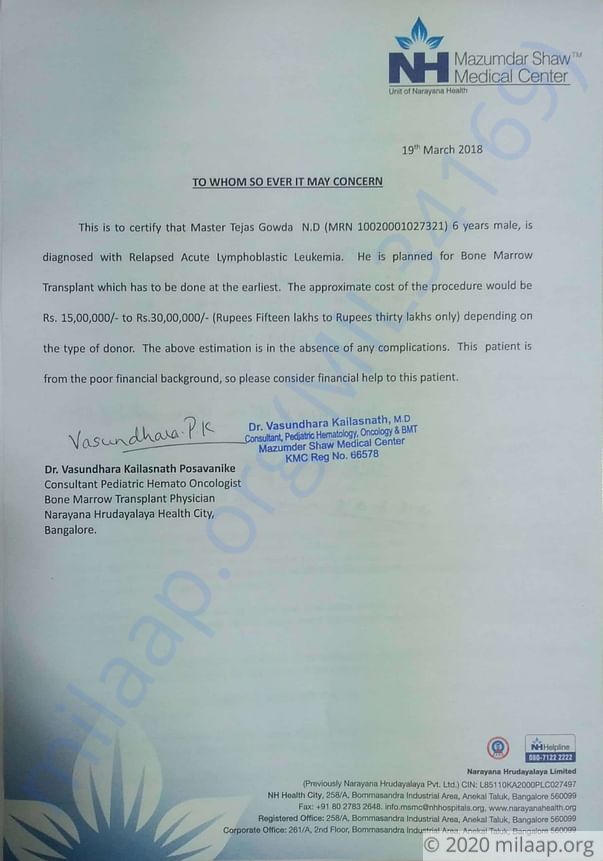 Master Tejas is doing well. He came to the hospital for followup checkups.

Master Tejas is doing well. He came to the hospital for followup checkups.

Tejas is doing well. He came to the hospital for follow-up checkups. 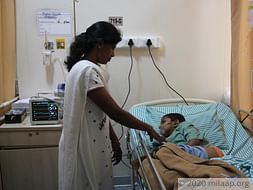 Cancer Will Take My Son Away This Time Without Your Help