Help Taxi Driver Rajesh Stay Alive by getting a Kidney Transplant | Milaap
Milaap will not charge any fee on your donation to this campaign. 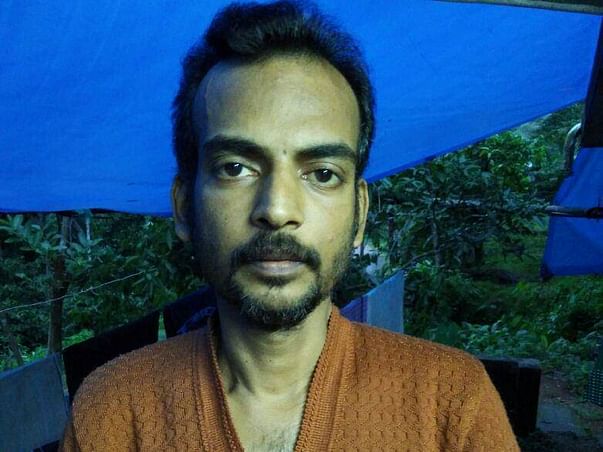 They say that if you wish to fully understand a life beset with sorrows, live that life for a day.
A Day in Rajesh’s Life
It was some day in September 2016. As dawn broke, two desolate figures – that of a severely ill young man and his aged mother – were slowly making their way to the nearest bus stop. They had to catch the 5:30 am bus; or else, they’d have to spend more money to get to the hospital, which was roughly 70 kms away.
Just months earlier, Rajesh had collapsed in a heap at the rented accommodation he shared with fellow taxi drivers and had to be rushed to Amrita Hospital for emergency treatment. Within a matter of hours, his health had gone from bad to worse, making him a long-stay patient. He was diagnosed with a chronic kidney disease.
He was now back in his village Kuttampuzha, a remote village in the Ernakulam district in Kerala that bordered on forestland. The onset of monsoon every year means temperatures in the area can drop significantly, making it necessary to keep oneself warm. Sadly, Rajesh’s unfinished home has no window glazing, which means he gets no protection against elements. Even on that day in September 2016, his frail body was struggling to cope with the cold as he woke up at 4:30 in the morning. Within minutes, he and his aged mother left home so that they could board a KSRTC bus to Amrita Hospital in Ernakulam. Rajesh had been asked to visit the hospital for a check-up to assess how his body was holding up.
By the time I rang him up, Rajesh and his mother had already reached the hospital and spent about 6 hours there awaiting their turn. As I wondered why he had chosen to be up so early in the morning to catch that particular bus, he said:
“Sir, this bus begins its trip from somewhere close to my home, so we don’t have to spend extra money on transport to reach the nearest bus depot in Kothamangalam (the nearest town). Also, we get dropped off right in front of Amrita Hospital, which means we don’t need to hire an autorickshaw either. It helps us save about 110 rupees.”
It’s the kind of money you, I, and many others spend on a snack or drink at a posh eatery!
As I listened to his words, I could feel a lump form in my throat, and a rogue drop of tear escaped my eye and rolled down my cheek. Now, they say grownup men shouldn’t cry, and to be honest, I don’t cry that easily either, but it was perhaps the nonchalance in Rajesh’s voice that chocked me.
Here was a guy fighting for his life, fully knowing that neither he nor his family had the means to get him the required medical care; yet he wasn’t disgruntled at the way life was treating him. No drama; No bitterness; Just a sagely acceptance of the fact that life had dealt him a blow, a blow so severe that it could very well end his life. And this is why I earnestly request you to help me save this man.
I can write reams about his cash-strapped background; about his father, a barber who is in a state of inebriation when he is not cutting hair; about his eldest brother who earns daily wages driving a dumper truck; about his other brother who is mostly at home since he became acutely diabetic, the disease putting an end to the money he made as a construction worker; about his mum, who is Rajesh’s constant companion during extended stays in hospital; but I have chosen not to. For if you have the heart to feel a fellow human’s pain, I am assuming whatever I have told you so far should suffice.
Treatment costs
Rajesh is currently being treated by Dr Jose Thomas of Rajagiri Hospital. It is estimated that if Rajesh undergoes a kidney transplant, the cost for processes at the hospital alone will exceed 9 lakhs (please refer to attached letter issued by his doctor). Since no one in his family is of the same blood group, a donor will have to be identified and paid, which can cost anywhere between 5 to 8 lakhs. Once operated on, Rajesh will have to be diligently nursed back to health over a year or so; if not, his body might reject the newly fitted organ altogether, causing fatality.  During the first year of recuperation, medication costs are expected exceed 3.5 lakhs. Given that his home doesn’t even have glazed windows, he’ll have to be shifted to a rented accommodation after surgery, or there is the risk of post-operative complications arising.
Taking all these into consideration, bringing Rajesh back to normalcy should cost about 25 lakhs. And I believe it is doable provided a lot of us come together with small contributions to give this young man a second chance at life. He was never rich, but he led a respectable life; let’s hep him regain his health so that he can go back to that life.
If you’ve read this far, then I thank you for spending time getting to know more about a stranger and his battle to continue living. Stay blessed!
In God I believe. 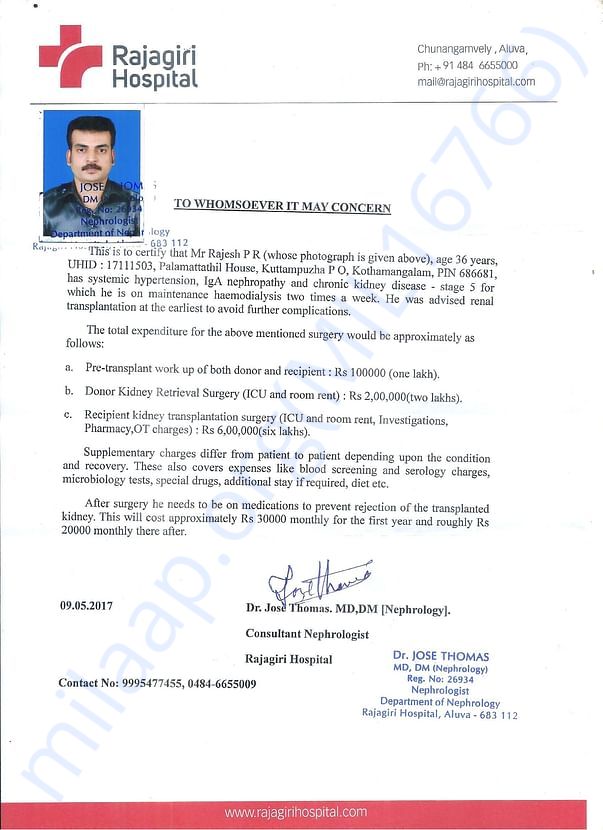 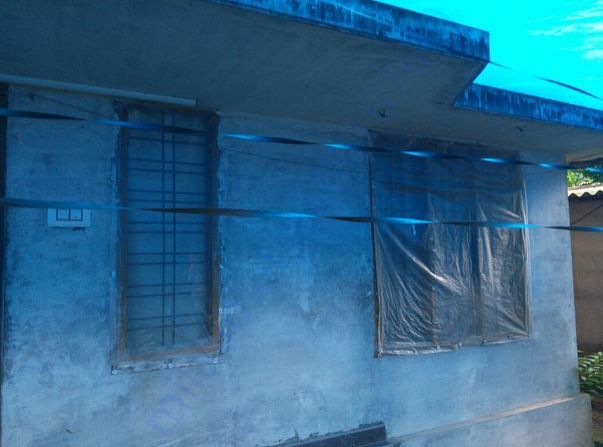 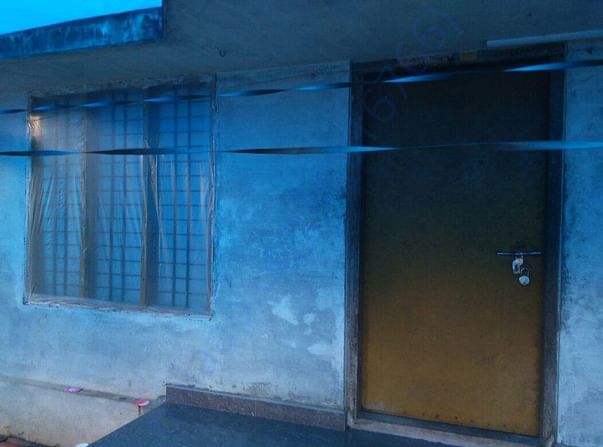 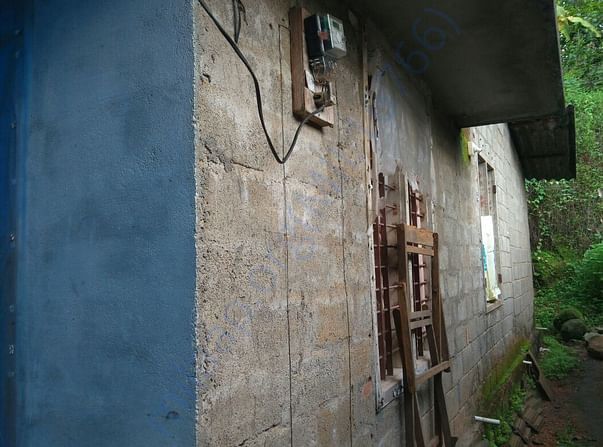 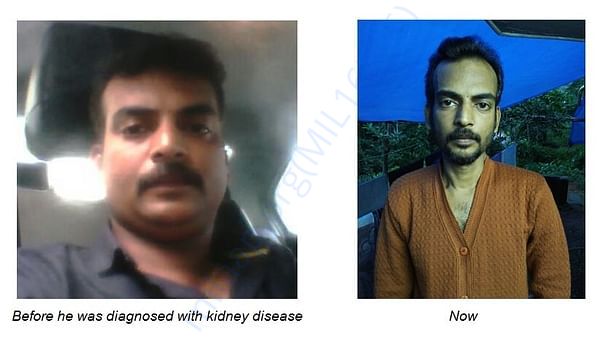 Rajesh's Doctor confirming the urgency to get him a transplant ASAP 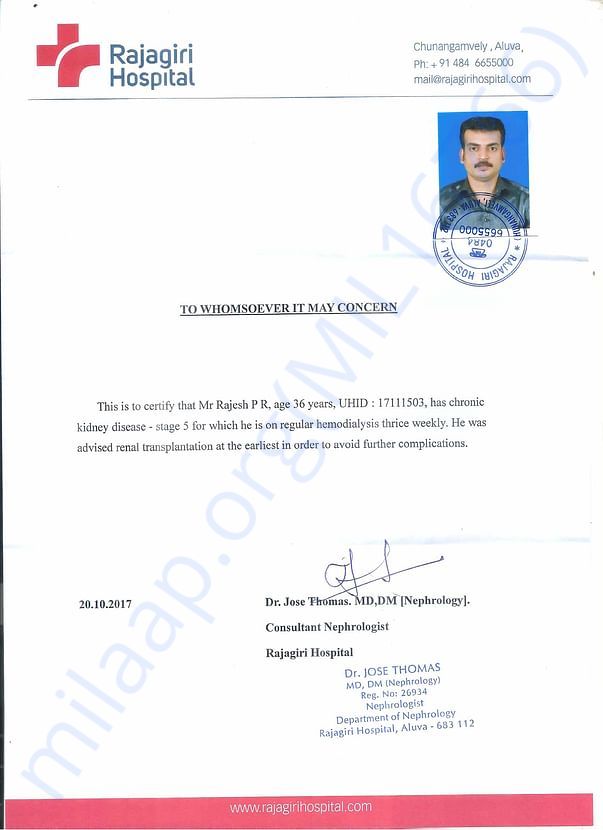 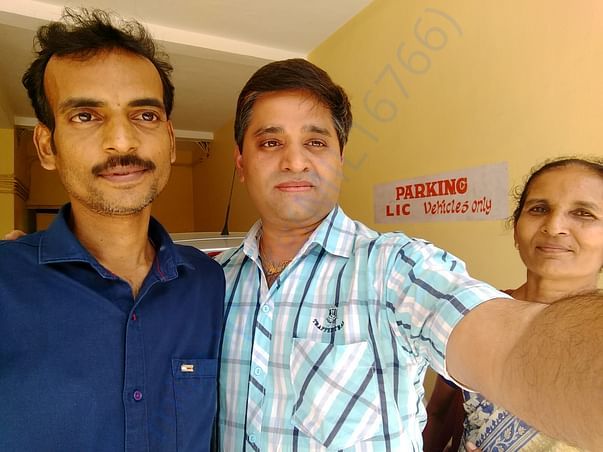 Ask for an update
Hi Friends,

Rajesh is still hanging in there, undergoing dialysis 3 times a week. Physically, he's become a mere shadow of what he used to be, but he's shown a lot of strength to keep fighting. And I feel that is largely down to the constant support he's received from virtual strangers over this time. Almost all the money we've received has gone into meeting his monthly medical expenses. Please, please do support him if you can. Thank you. God bless!
Dear Supporters,

Thank you for the wonderful support. Rajesh is hanging on to dear life, largely due to many individuals like you who have contributed generously towards his medical expenses. We still don't have enough money to get him a transplant - most of what we raise is spent on meeting his monthly medical bills. That said, please continue to support him so that he's able to get the best medical care.

Thank you very much to each one of you. Will keep you posted.

Thank you!
Rajesh's health is deteriorating with time, with his weight now down to a mere 45 kilos, but your donations have kept him alive. He still needs to undergo 3 dialysis sessions per week. The idea is to continue raising funds so that he is able to have medical care for as long as possible. We're still hopeful of getting him to undergo a kidney transplant, but so far we haven't been able to save up, as his monthly medical expenses continue making a dent in his finances.
Load more
Donate
OR

Scan & donate with any app
check_circle_outline Download payment receipt
Report fundraiser
Know someone in need of funds for a medical emergency? Refer to us
Rs.154,501 raised

You are sending a message to
Manoj Mohan
Go back 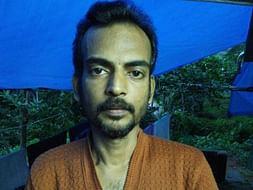