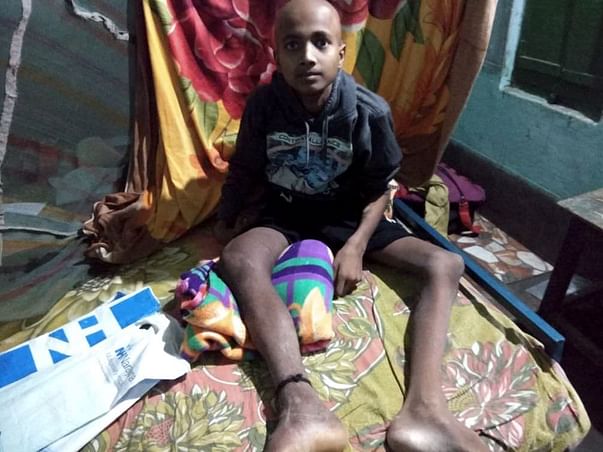 Sushanta's parents Jagadish and Rina are daily-wage workers from a small village in West Bengal. They believe that an injury caused their son Sushanta's bone-cancer and are heartbroken that they don't have the funds to save him. Sushanta needs chemotherapy and a surgery at the earliest to survive cancer.
Sushanta with his father at home
An unexpected injury revealed Sushanta's Cancer
Almost 6 months back, while playing cricket – the bat hit Sushanta's right knee. Sushanta is at the age where he often falls down and gets hurt while playing. But this time, the hurt was so painful, he felt it all the way in his head. His knee became swollen and he couldn't put any pressure on it.

Going to the local dispensary did not help. Finally, a week later – unable to see his son in pain Jagadish took Sushanta to the closest hospital 30kms from their village in Dakshin Dinajpur, West Bengal. Unexpectedly, Sushanta's pain was coming not because of the injury but because of a tumour in his bone.

For now, Sushanta is in the hospital, but without funds - it is not certain if he will continue treatment

A biopsy revealed that this tumour was actually cancer because it was growing aggerssively, pushing against muscle and bone. Sushanta needed immediate radiation therapy as well as a surgery. His parents were asked to make these arrangements.

The news that their son had Cancer hit Sushanta Jagadish and Rina. All they knew about Cancer was that people died of the condition. Hearing that their only child had the dreaded disease is something they have not yet fully understood or accepted.

Sushanta with his grandparents at home

Every day is becoming a painful struggle for Jagadeesh
Having faced extreme poverty in his own childhood, Jagadish had hoped to create a better childhood for his son. Sadly, he has not been able to make that life for himself. Jagadish works as a construction worker, earning Rs 120 for every day's work he puts in. On an average, he is able to find about 15 days of work in a month.

“The family is extremely poor and they are upset by the diagnosis. My sister, Sushanta's mother, has completely lost hope of getting him treated because they are so poor. I convinced them to not lose hope and come to Kolkata for treatment,” explains Sushanta's maternal uncle – Gopal.

Gopal explains that Sushanta stays positive and tries to cheer up his parents. But it is clear to Gopal that he himself is scared of what having Cancer mean. Despite his stoic exterior, Sushanta is very anxious, that he might need to lose his leg if he doesn't get better.

Jagadish has already spent over Rs 2 lakhs borrowing from the local moneylender. They are struggling to pay that back. Even though Sushanta's life is in balance, they know that they can ask for no more. All avenues of raising any money seem closed to Sushanta's parents.

How you can help
Never have Sushanta's parents felt this destitute and unfortunate as now when they need help saving their son. Contribute and help these daily-wage workers save their child from Cancer. 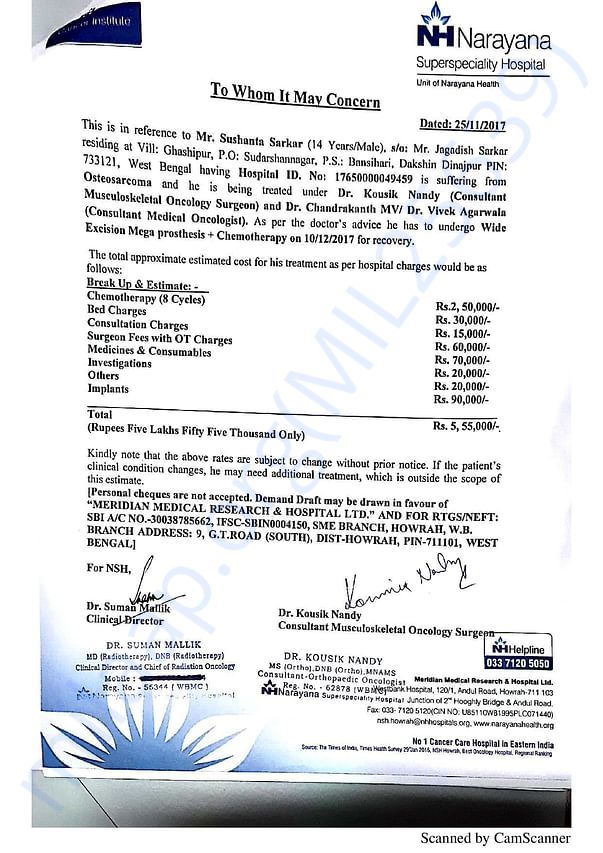 Sushanta is doing better now and looks healthy. He is wearing a specialized pair of shoes with high heels to help him walk.

The family is very hopeful of a complete recovery.

Here is an update on Sushanta.

Currently, he is at home at responding well to the treatment. He has undergone 5 cycles of chemotherapy, he still has to undergo 3 cycles one of which is scheduled on 25th January 2018.

Doctors will perform the surgery after he undergoes the remaining chemo cycles, which shall happen in the mid of February.

Thank you so much for your love and support. Please pray for him and his speedy recovery.

Scan & donate with any app
check_circle_outline Download payment receipt
Report fundraiser
Know someone in need of funds for a medical emergency? Refer to us
Rs.95,075 raised 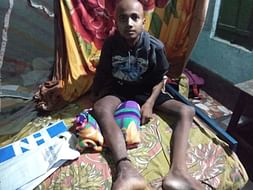