Auto Driver’s 6-Year-Old Has Unbearable Stomach Pain From Cancer | Milaap
This campaign has stopped and can no longer accept donations. 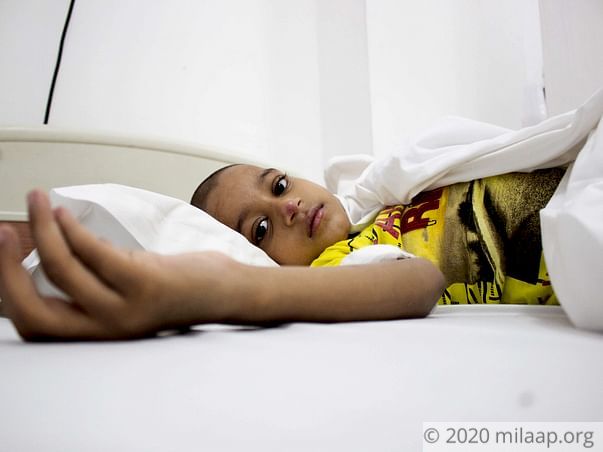 “On really bad days, Zeeshan cannot get up from bed only. He lies there, throbbing in pain. He does not speak much due to weakness and we have to really force him to eat something. Cancer is killing my child. If I don’t get money for treatment urgently, I may lose him forever.”-Chand, father of 6-year-old Zeeshan.

There was nothing that Zeeshan loved more than going to school to play with his friends. On that fateful day, he had gone to bed as usual. But sometime around midnight, he woke up with a piercing pain in his left eye. His parents, Chand and Reshma were shocked to find that his eye had swollen badly.


“It was really big. At first, we believed that it may have occurred as a result of an insect bite or something similar. He was crying the whole night and couldn’t sleep because of the pain. The next day itself we took him to the local clinic in our small village near Benares, UP, but they couldn’t figure out what was wrong with him. We were really worried.”-Reshma, mother.

Little Zeeshan’s swollen eye got better in a few days’ time, but his parents noticed that he had become really weak. He could not carry on with daily activities normally, let alone go to school. Chand took him to a doctor in Benares, where a blood test revealed that he had really low platelet count. He was given a blood transfusion immediately.

“He was not even able to go to the bathroom without me or his mother holding him – that’s how frail he had become. So we were sure that this was something serious despite our lack of education, and took him to another doctor in Benares. The doctor told us that if we had been even a day late, we would have lost our son. We were advised to take him to a better hospital.”-Chand.

When Zeeshan’s health was not improving at all despite taking medicines and undergoing transfusions, Chand and Reshma had no choice but to take him to Gurgaon. Chand had already spent a lot of money on doctor visits till then and had to beg and borrow to take him to a good hospital in Gurgaon. He just wanted to see his son become healthy and happy again, but fate had other plans for this desolate father.

“They did some tests at the (Gurgaon) hospital, and while I was waiting for the results I prayed for it to be nothing serious. But my worst fears came true when the doctor muttered the six letters in ‘cancer’. I had heard of cases where people were brutally killed by this disease. But my child – he is so small for all this. He doesn’t deserve to die. I will give my life away, but will not let a disease take him from us.”-Chand.

On Rs 200 a day, this poor auto driver cannot save his son from cancer that has already made him almost bedridden

With great difficulty, Chand managed to make sure that Zeeshan underwent at least one round of chemo in Gurgaon. But that is not enough to save his life and needs further treatment.  Zeeshan has no energy to even play with his little toy cars anymore, but that’s the only thing that’s keeping him happy.

“He lays his head on my lap and stays in bed, clutching his small car toys. My active child who never used to sit down for even a minute, has become like this due to cancer. He’s always complaining of bad stomach pain too and eats very less. I don’t know if I will have to see him dead too before his time because we have no money to save him.”-Reshma, with tears in her eyes.

Zeeshan needs prolonged chemotherapy to survive, but his father, Chand, cannot arrange enough money for it. Till now, he has almost borrowed Rs 2.5 lakhs from friends and relatives, but that is not even close to being enough. Chand has not been able to work for two months as the family had to move to Gurgaon for Zeeshan’s treatment. Every day is a struggle – with scant money to buy medicines, this family has to sometimes skip meals altogether. But they are determined to save Zeeshan.
Estimation letter 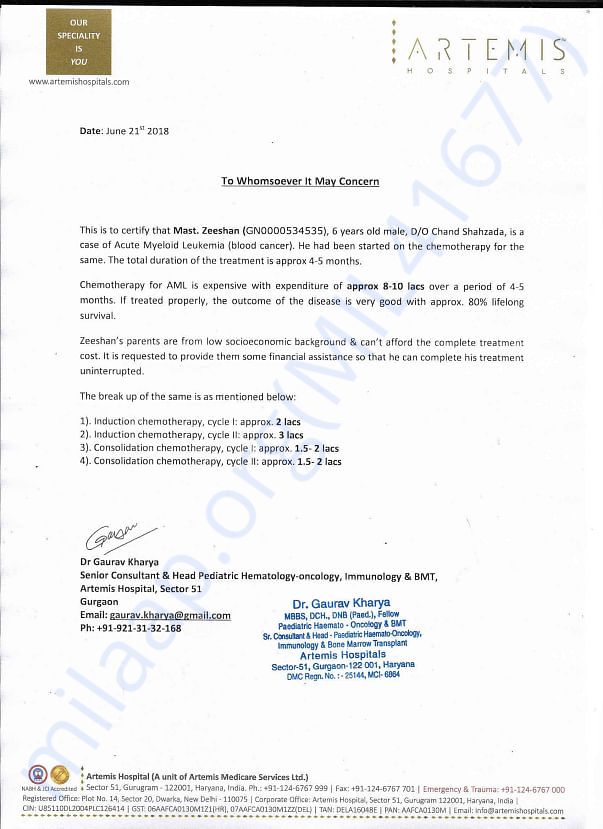 Zeeshan is doing well and has completed the treatment. He visits hospital for his regular follow up . He is recovering well and is responding well to his treatment. Thank you all for the support.

Thank you all for the love you have given Zeeshan. Here is a quick update about his health.

Zeeshan is a case of acute myeloid leukemia. He received two courses of induction and one consolidation. Currently he is recovering from his 1st consolidation block, after which he will receive 2nd consolidation. He is responding well to treatment so far.

Once again, thank you all for your love and support. Please keep praying for him.

We would like to inform you that Zeeshan is showing signs of improvement. He is undergoing induction chemotherapy and is responding well to the treatment.

We are all hopeful about his recovery. Please keep praying. Thank you everyone once again!

Donated to this campaign via Bank transfer/QR Code? Click here if you can’t find your donation listed below.
A
Anonymous donated Rs.101

Donated to this campaign via Bank transfer/QR Code? Click here if you can’t find your donation listed below.
A
Anonymous donated Rs.101 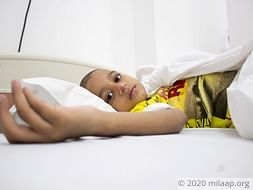