This Boy Longs To Play Cricket Again, But Cancer Stands In His Way | Milaap

This Boy Longs To Play Cricket Again, But Cancer Stands In His Way 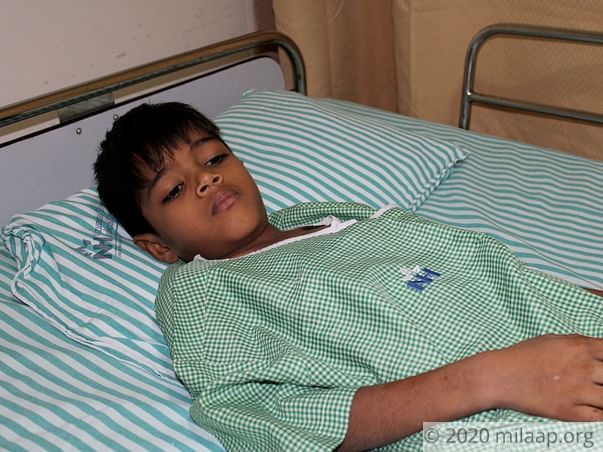 Until two months ago, young Yusuf Pathan (8) would spend every Sunday morning playing cricket with his neighbourhood friends. When he was not playing cricket, he was watching matches with his father, and both of them enthusiastically discussed every boundary and wicket. Yusuf gets his love for cricket from his father Kayum, who’s a fan of cricketers Irfan and Yusuf Pathan, and named his older and younger son respectively. Yusuf is very close to Kayum and used to spend hours telling him stories from school and his friends. However, twenty days ago, Yusuf’s happy and normal childhood changed tragically because of cancer. Now, he spends his Sundays in the cancer ward, while Kayum desperately tries to cheer him up.


“All the things that once made him happy, don’t even bring a small smile on his face now. I try talking to him about school or cricket, and he just lies on the bed, turning the other way. ‘why can’t we just go back home appa, why do I need these injections’ he asks me every day. I have nothing comforting to say to him.” – Kayum Pasha, Father.

Kayum and Tabassum will never be able to forget the day they found out about their son’s grave disease. What started as a mild fever, soon became an unbearable pain in his stomach and limbs. The worried parents soon took him from Raichur to Bangalore for tests. After several tests, Kayum and Tabassum sat in the doctor’s cabin, eagerly waiting for the reports. “I’m scared, I can feel that something terrible is going to happen,” Tabassum told Kayum, and she was right.


Yusuf was diagnosed with Hodgkin lymphoma, a blood cancer that starts in the lymphatic system that helps the immune system fight infections. Little Yusuf needs chemotherapy for the next 6 months to survive.

Yusuf was a cheerful and active boy, but cancer is making him weaker by the day

“Yusuf is everyone’s favourite. His teachers always told me that he studied very well, and was extremely helpful and sensitive. He would share his food with everyone and never made any child feel left out. If he saw someone sitting alone, he would join them and play with them. Yusuf is only 8-years-old, but he often says that he will become a police officer when he grows up and help people. Now he’s getting weaker by the day. Sometimes he throws up even the medicines he takes.” - Kayum

Kayum, a school teacher, can’t afford the chemotherapy that can save his son's life

While there’s hope for little Yusuf to get better with chemotherapy, Kayum and Tabassum can’t afford it. Kayum teaches Kannada in a government school near his hometown in Raichur, Karnataka, and is the sole breadwinner of the family. With the devastating news of his son’s cancer, he was determined to do everything to save him. He reached out to everyone he knew and managed to collect 4 lakhs. Unfortunately, it isn’t enough.

“I don’t have the strength to the say the word cancer. I just tell everyone that he’s very sick and I need all the help that I can get. But now I’ve exhausted everything I had on his tests and in starting the treatment. I can’t afford the 12 lakhs needed to continue his treatment for the next 6 months.” - Kayum

As Yusuf sits in the confines of the hospital ward, all he dreams of is the field near his house where he played cricket with his friends. He longs to get away from this ‘sickness’ and be free and happy like he used to. Yusuf’s cancer can be cured with chemotherapy, but his parents can’t afford his life-saving treatment. He needs your help to get timely treatment and survive.

UPI: rzpy.givetomlpyusufpat001@hdfcbank (Copy to clipboard)
Or
Click here to read the instructions before you make a bank transfer. 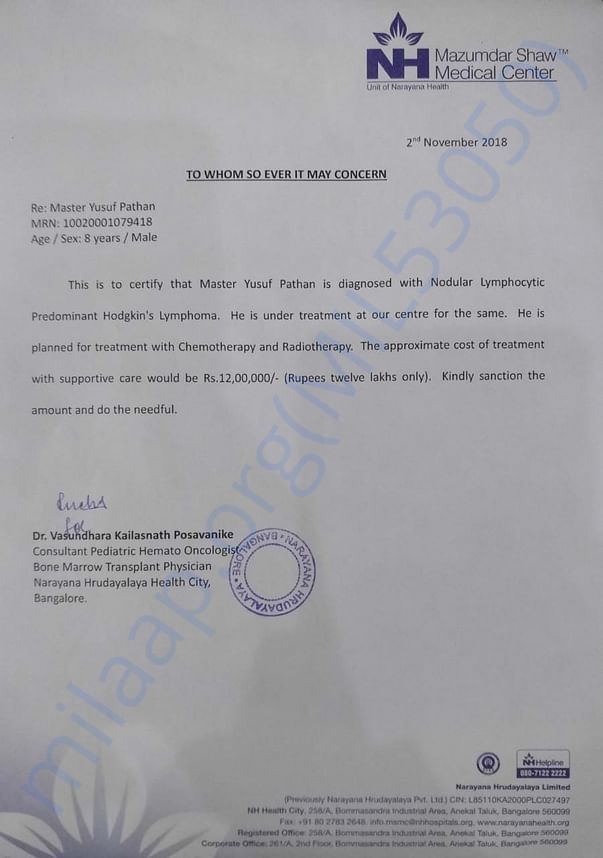 UPI: rzpy.givetomlpyusufpat001@hdfcbank (Copy to clipboard)
Or
Click here to read the instructions before you make a bank transfer.

Report fundraiser
See how thousands are crowdfunding for their causes on Milaap
Rs.33,500 raised

Donated to this campaign via Paytm? Click here if you can’t find your donation listed below.
Rv
Rachna donated Rs.500
A
Anonymous donated Rs.7,000

Donated to this campaign via Paytm? Click here if you can’t find your donation listed below.
Rv
Rachna donated Rs.500
A
Anonymous donated Rs.7,000 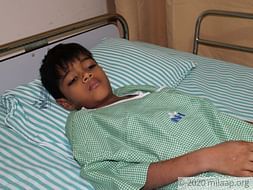 This Boy Longs To Play Cricket Again, But Cancer Stands In His Way