Stepfather Struggles To Save His 12-Year-Old From A Rare Disease | Milaap
This campaign has stopped and can no longer accept donations. 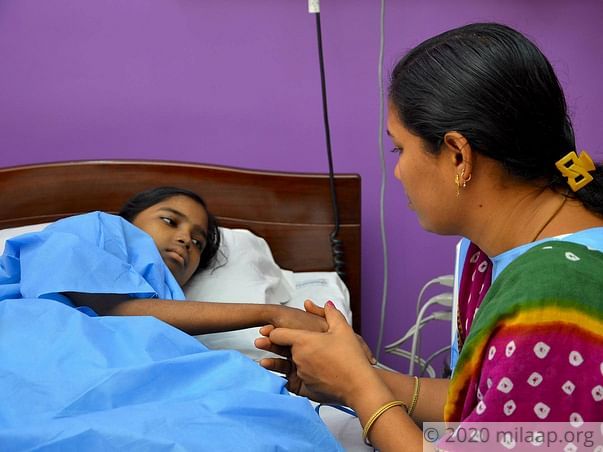 "When I carried her for the first time, she was only a 2-year-old baby, unaware of her father's death, who smiled innocently at me. In that moment I promised myself that I will take care of her till my last breath and be the best father to her. She believes that I'm her superhero who will protect her from everything. But now as she fights a sever disease, I'm struggling to save her. I fear that will fail her." - Karthik

An old photo of Yamini with her parents

They were a happy family, but Yamini suddenly fell sick

Yamini and her sister Kanmani (5) were pampered equally by Ramya and Karthik. They have never been able to afford to go for a movie or out for a meal, but the parents ensured that during their birthday’s they got chocolates and cake. Yamini also didn’t ask for much. All she wants is to have dinner with her father at home while she tells him all the stories from school. Ramya felt blessed and happy. After her husband passed away when Yamini was just a baby, she was so worried. But when she married Karthik, she saw the love he had for her. They were happy.

However, a year ago, Yamini fell terribly sick – she was diagnosed with Fanconi anemia, a serious blood disorder in which the bone marrow doesn't make enough blood cells or makes abnormal types of blood cells. Yamini's bone marrow has failed completely and she needs an urgent transplant to survive.

"She had a high fever and it did not subside at all, we took her to different hospitals. Suddenly she got lumps all over her body. She could not even sleep, she would cry the whole day. We did not understand what was happening to her. Now the doctors have told us that only a bone marrow transplant can save her. The blood she gets every month isn't enough." - Ramya.

Yamini before the disease took over her life completely

Karthik has always been there for his daughter Yamini - whether it was dropping her to school or cheering for her on sports day, he never missed anything. And even now, during her darkest days, he holds the bucket for her while she throws up, sleeps outside the hospital for days, and juggles between work, home and hospital. There is nothing this poor father has not done to help his daughter - he has done a number of odd jobs, borrowed from everyone he knew and used all his savings.


"My wife and Yamini are in Chennai and my younger daughter is in Madurai. I keep travelling back and forth. When I go for work, I feel extremely guilty for not being next to her. She begs me to stay with her all the time. But I can't. My job is the only thing that's helping us afford her medicines now. I wish I was with her right now. It has been so long since I saw her smile." - Karthik

Yamini believes that her father will save her at any cost, but he can't without your help

Karthik works as a driver, and on the days he has work, he earns Rs 500. After Yamini fell sick, he tried everything - he even sold flowers in the nearby market. There have been days when he has slept outside the hospital because he cannot afford a room. Now he has rented a small room in Chennai and borrows money to even buy food for all of them. Yamini's rare disease is causing her so much pain and it can turn fatal without a bone marrow transplant. Unfortunately, it costs 30 lakhs, which is absolutely impossible for him to afford.

"I have tried everything possible but nothing seems to be enough, my only hope is the crowdfunding. My daughter will not survive without a transplant and I need your help. She trust me so much. I cannot imagine losing her. Please help me." - Karthik

Together we can save 12-year-old Yamini 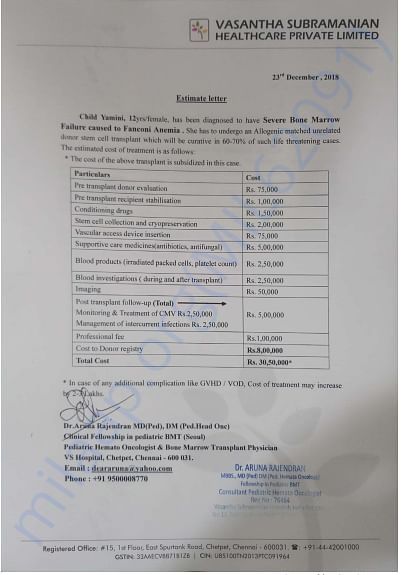 Yamini is no more with us. Yamini was undergoing her treatment but her health deteriorated and she couldn't make it.

All the funds raised will be utilized to clear her medical expenses.

May her soul Rest in Peace.

Scan & donate with any app
check_circle_outline Download payment receipt
Report fundraiser
Know someone in need of funds for a medical emergency? Refer to us
Rs.76,596 raised

Donated to this campaign via Bank transfer/QR Code? Click here if you can’t find your donation listed below.
A
Abhigna donated Rs.500

May JESUS heal you, Amen

May God be with you during this difficult period

Donated to this campaign via Bank transfer/QR Code? Click here if you can’t find your donation listed below.
A
Abhigna donated Rs.500

May JESUS heal you, Amen

May God be with you during this difficult period 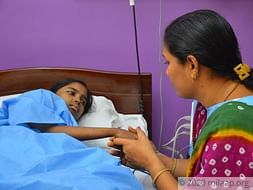