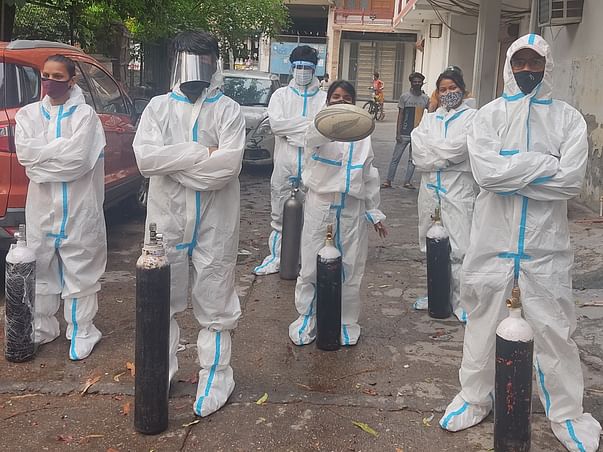 In common Rugby parlance, the front rows, who play a pivotal role in the scrum open up spaces and doors for the forwards and backs to ground the ball in the in-goal area. The sport of Rugby recognises the equal role played by each player, irrespective of their positioning on the field. This is the core essence of the game, which we have been able to bring to the relief work that we are now engaging in.

The unprecedented crisis of the second wave motivated Wolfpack, a Delhi-based Rugby team made up of misfits and survivors of social disorganization to take charge as forwards to address the systemic failure facing the country at large.  As the health emergency broke out and cases reached an all-time high, the members of Wolfpack knew it was time to take charge and put to practice their learnings from the field which the sport of Rugby had imparted them. In the middle of planning operations, the unexpected death of a team member’s father due to the lack of oxygen caused much emotional upheaval to the team. However, trained as Rugby players, their eyes were set on the target. The team toiled for months, spending sleepless nights outside oxygen refilling stations to fulfil every SOS call that they received. In the months of April and May 2021, We distributed 600+ oxygen cylinders on a rotation basis to families in Delhi NCR.

Our work was recognised by several organisations and individuals who offered to provide us support. As we continued, organisations like Goonj, Commutiny- The Youth Collective, VartaLeap, Purani Dilli Walo Ki Baatein, and Aumtara the Spiritual Hub among others joined us in our fight against the pandemic.

The second wave may have subsided in metropolitan cities, but the devastation that it has caused across urban centres and its fast movement into outlying areas and rural communities requires immediate action. As the geography and nature of the wave shifts, we have repurposed our COVID relief plan. We are receiving requests from across the country, and hence seek your support in purchasing supplies for distribution pan India. From our remaining funds, we have successfully distributed 500+ ration kits in Delhi and Uttar Pradesh. However, we are still looking for funds.

To meet the requests coming from different parts of the country, we need your support in purchasing 2,000 ration kits and COVID care kits each for distribution.

Whereas, each ration kit will cost us approximately Rs. 2,000 to support a family of 4 for a month, a COVID care kit will cost us Rs. 500. Please note that this amount also includes administrative costs.
Rugby India and Wolfpack were also activated in the first wave as the forwards and backs of the program handling on-ground and online resource generation respectively.
To carry out the work efficiently, we have built on-ground teams. At the backend, we have dedicated teams facilitating consolidation, verification and allocation of resources to ensure last-mile delivery.

We thank each member of the team for their commitment to the initiative. Influenced by the sport of Rugby, we acknowledge the role played by each team member irrespective of their positioning on the field.